FIGURE 1. Diagram depicting key concepts of direct and indirect labelling methods in immunohistochemistry. Arrows indicate inoculation with or production of biomolecules in organisms. In this example, a rabbit is inoculated with an antigen in order to produce primary antibodies raised against that antigen that are capable of binding to a particular epitope on that antigen. A goat is inoculated with rabbit immunoglobulin to produce secondary antibodies raised against the rabbit immunoglobulin that are capable of binding to the primary antibodies. Visualization markers often involve fluorophores or enzymes, but other molecules can be used. Rabbit (credit: Sarah Werning, https://creativecommons.org/licenses/by/3.0/legalcode, Creative Commons Attribution 3.0 Unported, CC BY 3.0) and goat (credit: Public Domain Dedication 1.0, CCO 1.0 Universal, https://creativecommons.org/publicdomain/zero/1.0/legalcode) silhouettes were obtained through phylopic.org.

FIGURE 2. Our attempt to replicate high heat feather combustion. White chicken contour feather before, A, and after, B, and brown and white turkey flight feather before, C, and after, D, wrapping in foil and heating in a Carbolite laboratory oven set to 350ºC. The oven was turned off a few minutes after it was turned on due to excessive smoke production. The samples were removed shortly after, when the oven had cooled. Modified from the supplemental material of Saitta et al. (2018b). 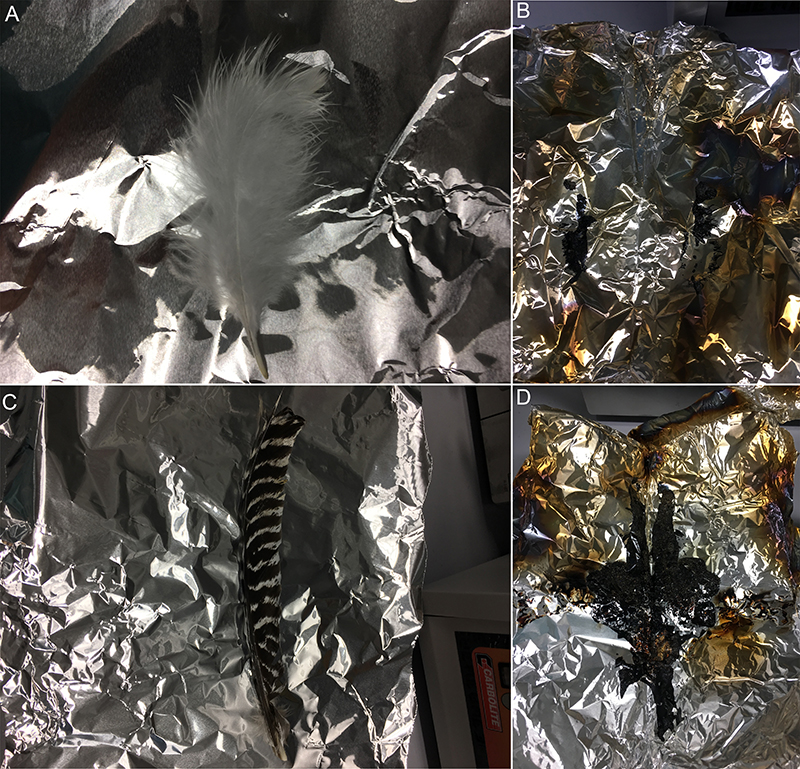