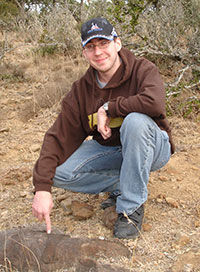 Christian Kammerer is a vertebrate paleontologist working at the Museum für Naturkunde in Berlin, Germany. He received his doctorate in evolutionary biology from the University of Chicago in 2009. Christian's research focuses on the evolution of Permo-Triassic terrestrial vertebrates, with a special emphasis on non-mammalian synapsids (although he has been known to dally in the "dark side" of archosaurian research). His interests include synapsid paleoecology, biogeography, and phylogeny, topics which have historically been hamstrung by the sorry state of synapsid species-level taxonomy. To remedy this, he has been gradually working his way through comprehensive taxonomic revisions of all the major synapsid clades, with current attention being given to the Gorgonopsia. Christian's field programs center on the exploration of understudied Permo-Triassic basins, and has for the past several years been engaged in fieldwork in northeastern Brazil. He not-so-secretly got his start in ichthyology, and maintains an interest in fish biomechanics and diversity through time.