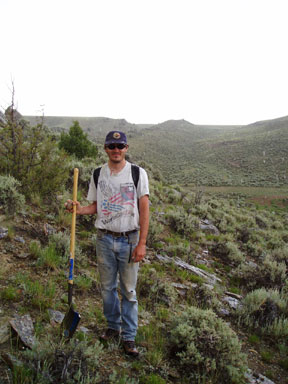 Although officially born in Cambridge, Massachusetts, my family and I moved to Birmingham, Alabama when I was three weeks old. Like several other PE staff members, I am a southerner. However, after years of book learning at fancy pants schools and good clean living just about everywhere but in the South, among the few vestiges of my down home origins are a predilection for the use of "ya’ll" in formal communications and a fondness for bass fishing. Four years after my triumphant return to the town of my birth, I received an A.B. in Biological Anthropology from Harvard University with an emphasis in hominid paleontology. I then moved to the upper left corner of the country and worked for a time as a wooden stair maker’s apprentice in Seattle, Washington. Save for some of the usual twists and turns life presents us, I would probably still be there making turning wooden staircases. Instead, having decided I was interested in a field with more fossils than workers, I moved to the Midwest for graduate studies in vertebrate paleontology in the Department of Geological Sciences and Museum of Paleontology at the University of Michigan. Under the guidance of Dan Fisher and Catherine Badgley, I developed a range of research interests in graduate school that I continue to pursue today. These include the evolution and ecology of elephants from the point of view of their tusks, applications of stable isotopes in paleoecology, ecological changes and extinctions among late Cenozoic mammals in North America, the ecological structure of the modern mammal fauna of North America, and stratocladistics. While at Michigan, I became a Paleogene groupie, rooted for Notre Dame, and learned that practical jokes on Jason Head can be fun and educational for all. After finishing my Ph.D. in 1999, I moved out to the left coast for a postdoc with my academic brother Paul Koch at the Department of Earth Sciences at the University of California, Santa Cruz. Two years of mountains and ocean, California rolls and surfers, temperatures that never get below 50° F and the risk of sinking into the sea were enough for me, so in 2001 I had to move back to the middle of the country. I am now an Assistant Professor in the Department of Geology and Geophysics at the University of Minnesota in Minneapolis and continue research in stable isotope paleocology, mammalian paleoecology and biogeography, and stratocladistics.