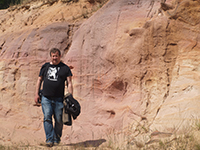 Krzysztof Stefaniak was born on November 29, 1962 in Bielawa. In 1986 he graduated in biology at the Faculty of Natural Sciences of the University of Wrocław. He defended his doctoral dissertation in 2001, he published his habilitation thesis in the form of a monograph entitled “Neogene and Quaternary Cervidae from Poland” in 2015, doctor habilitated since 2016. His main scientific interests are palaeozoology, biology, archaeozoology, biostratigraphy, research on cave environments. It specializes in the Cenozoic mammals, mainly cervids and elephants, perissodactyls and artiodactyls. An important new research direction is the study of ancient DNA of vertebrates, phylogeography and migration of vertebrates in the Pleistocene. He conducts his research both in the karst areas of Poland, Ukraine and the Crimea, as well as in Neogene and Quaternary open localities from Poland, Belarus and Siberia. He published over 80 scientific articles, including 2 monographs (1 in a co-authorship), a dozen or so chapters in monographs, scientific and popular science books. He works as an assistant professor. Currently, he is the head of the Palaeozoology Department at the University of Wrocław. He participated as a performer of grants dedicated to the studies of cave and archaeological sites. In 2017, he became the leader of a research project funded by the National Science Centre. “Life and death of rhino (Stephanorhinus sp.) from Western Poland: a multiproxy paleoenvironmental approach”.