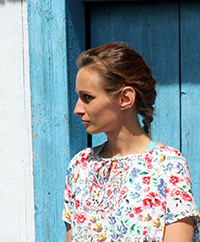 Natalia Starzyk is an invertebrate paleontologist who works on early decapods. Her research is currently focused on the evolution and diversity of Jurassic and Cretaceous brachyurans, which were widespread on the territory of what is now Europe. She named a number of new species of true crabs from Oxfordian localities from the Polish Jura Chain.