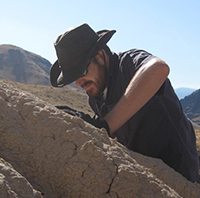 Joshua Samuels received his bachelors (B.S.) in biology from the College of Idaho and a doctorate (PhD) in biology from UCLA. From 2010 to 2016 he was Museum Curator / Chief of Paleontology at John Day Fossil Beds National Monument in Oregon. In 2016 he started a new position at East Tennessee State University as Assistant Professor of Geosciences and Research Curator at the Gray Fossil Site & Museum. His research has mainly focused on the paleoecology and evolution of mammals, primarily rodents and carnivorans, as well as systematics and biostratigraphy.