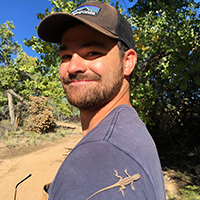 Simon Scarpetta is an evolutionary biologist, herpetologist, and paleontologist. He is a PhD candidate at the University of Texas at Austin in the Jackson School of Geosciences. He studies biogeography and systematics of Miocene lizards in North America, phylogenetics of extant gerrhonotine and iguanian lizards, and all things anole. His main research interests are 1) how and whether climate drives cladogenesis and biogeographic shifts 2) integration of molecular and fossil data in phylogenetics 3) assessing different methods for identifying fossils and 4) field biology. Simon uses fossils, molecular data, high-resolution computed tomography, and field biology in his research.

Simon received his B.S. in Biology with an emphasis in ecology and evolution from Stanford University in 2014. He also enjoyed a two-year position as a campus conservation biologist at Stanford.