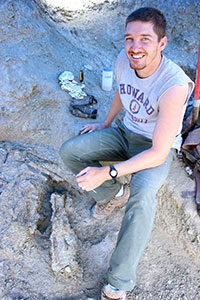 Nathan Smith is an Assistant Professor of Biology at Howard University in Washington, DC, and a Research Associate at the Field Museum of Natural History and the Smithsonian National Museum of Natural History. He also currently serves on the USAP Steering Committee for Deep Field Camps in the Transantarctic Mountains. Nate received his B.A. from Augustana College, a M.S. from the University of Iowa, and a Ph.D. from the University of Chicago. Nate’s research is funded by the National Science Foundation and National Geographic, and focuses on the evolution and biogeography of Triassic–Jurassic dinosaurs, Cenozoic waterbirds (e.g., penguins, pelicans, and allies), scleractinian corals, and the application of phylogenetic comparative methods to broad questions in systematic biology and paleontology. Nate has conducted fieldwork in Antarctica, Argentina, China, and the southwestern and western United States.

Dan Ksepka is a vertebrate paleontologist and evolutionary biologist at the National Evolutionary Synthesis Center. He received a BS in Geological Sciences from Rutgers University and a PhD in Earth and Environmental Sciences from Columbia University through the American Museum of Natural History joint fellowship program. His current research focuses on exploring patterns of congruence and disparity between fossil ages and molecular divergence dates. Dan is also interested in major evolutionary transitions in birds, especially the evolution of wing-propelled diving in penguins. He enjoys sharing science with all types of audiences and blogs at March of the Fossil Penguins (fossilpenguins.wordpress.com).