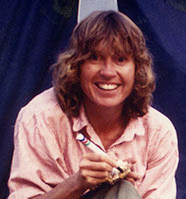 Anna Gillespie is a research assistant and senior preparator at the Vertebrate Palaeontology Laboratory at the University of New South Wales. She received her PhD from the University of New South Wales in 2007. Her doctorate focussed on the marsupial lions recovered from the Riversleigh World Heritage Area of Australia. She has been one of the chief preparators of the Riversleigh WHA fossil material since 1992. Her fields of interest include the evolution of Australian vertebrates and in particular, the evolution of marsupials, marsupial lion taxonomy and systematics, and functional morphology.

Mike Archer was born in Sydney but lived in the USA until 1967 when he moved back to Australia. By age 11 he was addicted to fossil and living animals. Degrees: Princeton University BA, University of Western Australia PhD. Key positions: Professor, University of New South Wales; Director of the Australian Museum, Sydney; Dean of Science, University of New South Wales. Research foci (~16 books & >300 refereed journal articles) include: evolution of mammals, in particular monotremes and marsupials; evolution of Australia's terrestrial environments; biocorrelation of Australia's Cenozoic vertebrates; impacts of palaeoclimate; paleoconservation; innovative biofuel company; conservation through sustainable use of native resources; native animals as pets; battling Creationism; dental function and ontogeny; megafaunal extinctions; biogeographic history of New Zealand; early Cenozoic biotas of Argentina; megatsunamis; lacustrine and karst geology; etcetera. We started the Thylacine & Lazarus Projects to see how far we could get in efforts to recover, revitalize and enable ancient DNA to reconstruct living organisms. For more info: http://www.bees.unsw.edu.au/michael-archer, http://www.create.unsw.edu.au/team/marcher/.

Suzanne Hand is a vertebrate palaeontologist and Professor at the University of New South Wales where she teaches zoology and geology. Her research interests are largely in the areas of evolutionary biology, functional morphology, phylogenetics, and biogeography, with a special interest in fossil and modern mammals, particularly bats. She co-leads research of the World Heritage-listed Riversleigh fossil deposits of northern Australia, and is also currently researching fossil mammal faunas in Europe, Asia, New Zealand and New Caledonia. She is the author of 150+ publications on Australian fossil mammals including several books.