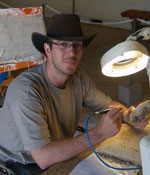 Peter Falkingham graduated from the University of Bristol, U.K. with a BSc in Biology and Geology (Joint honours) in 2003, and the following year with an MSc in Computer Science. Peter spent a year at the Yorkshire museum as a documentation assistant before undertaking a PhD at the University of Manchester, U.K. which he completed in 2010. His current research is focused on using computational techniques including finite element analysis to study dinosaur track formation.