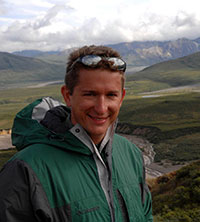 Daniel Hembree is an Associate Professor in the Department of Geological Sciences at Ohio University. His research interests primarily lie with animal-substrate interactions in ancient and modern continental environments. These interactions are preserved in the fossil record as trace fossils. Trace fossils provide an in situ record of ancient biodiversity, ecology, and environment. The study of trace fossils, therefore, provides vital information for accurate paleoenvironmental reconstructions. This involves not only the study of paleosols and continental trace fossils throughout geologic time, but also the experimental study of burrowing behaviors of extant terrestrial annelids, arthropods, amphibians, and reptiles. Current research projects involve the study of the influence of climate changes on ancient soils and soil ecosystems including those of the Pennsylvanian and Permian of southeast Ohio, Permian of eastern Kansas, and the Eocene to Miocene of Colorado and Wyoming.