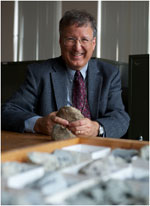 Mark Wilson earned his Ph.D. at the University of California (Berkeley) in 1982 and has been teaching at The College of Wooster in Ohio ever since. His primary interests are the paleoecology and evolution of hard substrate communities, including the systematics of encrusting and boring organisms (yes, he's heard that joke many times!) and the stratigraphic utility of carbonate hardgrounds. Lately he has been concentrating on the evolutionary paleoecology of calcitic tube-dwellers such as microconchids, cornulitids and hederelloids. He grew up in the Mojave Desert and so tries to be in hot and dry places as much as possible, despite living in Ohio for thirty years.