The aim of palaeontology is to reconstruct the biology, ecology and evolution of ancient life through study of the fossil record. This record is extremely biased in many ways but most significantly to the preservation of the hard parts, such as the shells, bones and teeth, of animals. A palaeontologist’s "goldmine" is an exceptionally preserved biota (fossil conservation-lagerstätten) where articulated skeletons and/or the soft parts of organisms have miraculously, by one means or another, survived to become part of the fossil record.

There are now several books on fossil lagerstätten, with informative text and some with beautiful fossil photography, which are useful to academics, and accessible to students and the interested amateur palaeontologist. These books describe the geology, palaeontology and significance of exceptionally preserved biotas and, if well-produced, give the general public an insight into the fascinating world of fossils as well as reminding the seasoned palaeontologist how lucky they are to do what they do! Stephen J. Gould's book Wonderful Life on the celebrated Cambrian Burgess Shale resides on many a book shelf, other recent additions to volumes dedicated to lagerstätten are: Solnhofen: A Study of Mesozoic Palaeontology (N.H.M. Swinburne, S. Conway Morris, K. Werner Barthel); Fossils of the Santana and Crato Formations, Brazil (D. M. Martill); and Das Holzmaden-buch (B. Hauff & R. B. Hauff- short on text but containing the most beautiful fossil photography I have seen).

The fossils of the Hunsruck Slate: Marine life in the Devonian is certainly a welcome addition to these books. The Hunsruck Slate is the best-known of Devonian lagerstätten; it outcrops in the Rhenish Massif, western Germany, and contains a diverse marine fauna. This book represents an enhanced and revised version of an earlier (1990) book on the deposit by Christoph Bartels and Günther Brassel which was produced in German. The soft tissues in this lagerstätten have become preserved through replacement by the mineral pyrite. This mineral replacement occurred before decay processes destroyed the soft tissues and all the valuable palaeontological information that they have subsequently provided.

After a short introduction the book is divided into three sections. Part 1 deals with the mining history of the slate, the geological setting and the palaeoecology and preservation. The mining history was certainly fascinating and parts of the palaeoecology and preservation section would be of great value to final year undergraduates. In particular, the pyritization of soft parts, which has only recently been investigated and understood, is lucidly explained and allows this complicated process to be comprehended. 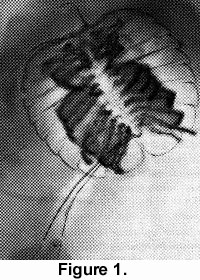 Part 2, the largest section, deals with the fossils themselves. Commencing with plants and ending with annelids and arthropods each higher taxon is introduced and each genus is graced with a brief description including their occurrence, and where possible, insights into their possible palaeobiology and palaeocology. There are many good photographs in this section and a few line diagrams illustrating what these taxa may have looked like (perhaps not quite enough of the latter). It is a feature of the pyritized nature of some of the fossils that they may be viewed by the use of x-radiography (Figure 1). The images of these fossils are not only beautiful, in a ghostly sort of way, but are extremely useful in subsequent fossil exhumation and preparation (just look at the 'before and after' photographs of the specimen of Schizotremite on pages 167 and 168). The radiographs are, however, terrible reminders to those of us who cannot use this technique as to how many superb fossils we must chuck away, still entombed within lumps of rock, during the lottery of fossil collecting.

Part 3 deals with the techniques of collecting and preparing the Hunsrück Slate fossils, the analytical techniques employed in both fossil and sediment analyses and the plan of future research. The excellent and detailed descriptions of fossil preparatory techniques may be particularly useful to curators and researchers. The incredible patience and skill required in fossil preparation is evident on page 259 where a series of photographs shows a buried asteroid, its x-radiograph and its subsequent exhumation by needles and scrapers by Günther Brassel-a medical surgeon would surely be impressed! Following this last part is a small section which I know will be extremely useful to many researchers-simply a list of taxa recorded from the Hunsrück Slate; a quick and easy to use inventory.

Finally the bibliography has a useful introduction and is extremely comprehensive. I thoroughly recommend this book as it brings together all the information, and more, that has been published on this world-class lagerstätte. The text is easily understood even where, as in the case of pyrite preservation, the subject is quite complex. While it would cost too much for the average undergraduate student to buy this book they should at least browse through it-every university library should have a copy. Undergraduates would find the sections on palaeoecology and preservation particularly useful. As a palaeontologist working on exceptionally preserved biotas I am grateful that so much dispersed literature has been compiled along with handsome photographs in one book.