Unlike most vertebrate animals that replace their teeth throughout their lifetime, mammals are restricted to two sets of teeth: the “baby” teeth (deciduous teeth) that erupt early in development, and the adult teeth that erupt later and replace some of the deciduous teeth. Because mammal teeth can be so complex, they are useful for figuring out what extinct mammals ate and how they are related to each other. Using CT scans we examined some specimens of juveniles that were in the process of replacing their deciduous teeth with their adult teeth. The shape of the deciduous teeth and the timing and order of dental replacement are important for figuring out how hyaenodonts are related to each other and where this mysterious group might fit in the Mammal Tree of Life. We also discovered hyainailouroids may have taken longer to erupt all of their adult meat-slicing teeth than the relatives of dogs, cats, and hyenas that replaced them around the world. This developmental difference may be an important clue in understanding why hyaenodonts went extinct and modern carnivorans took over. 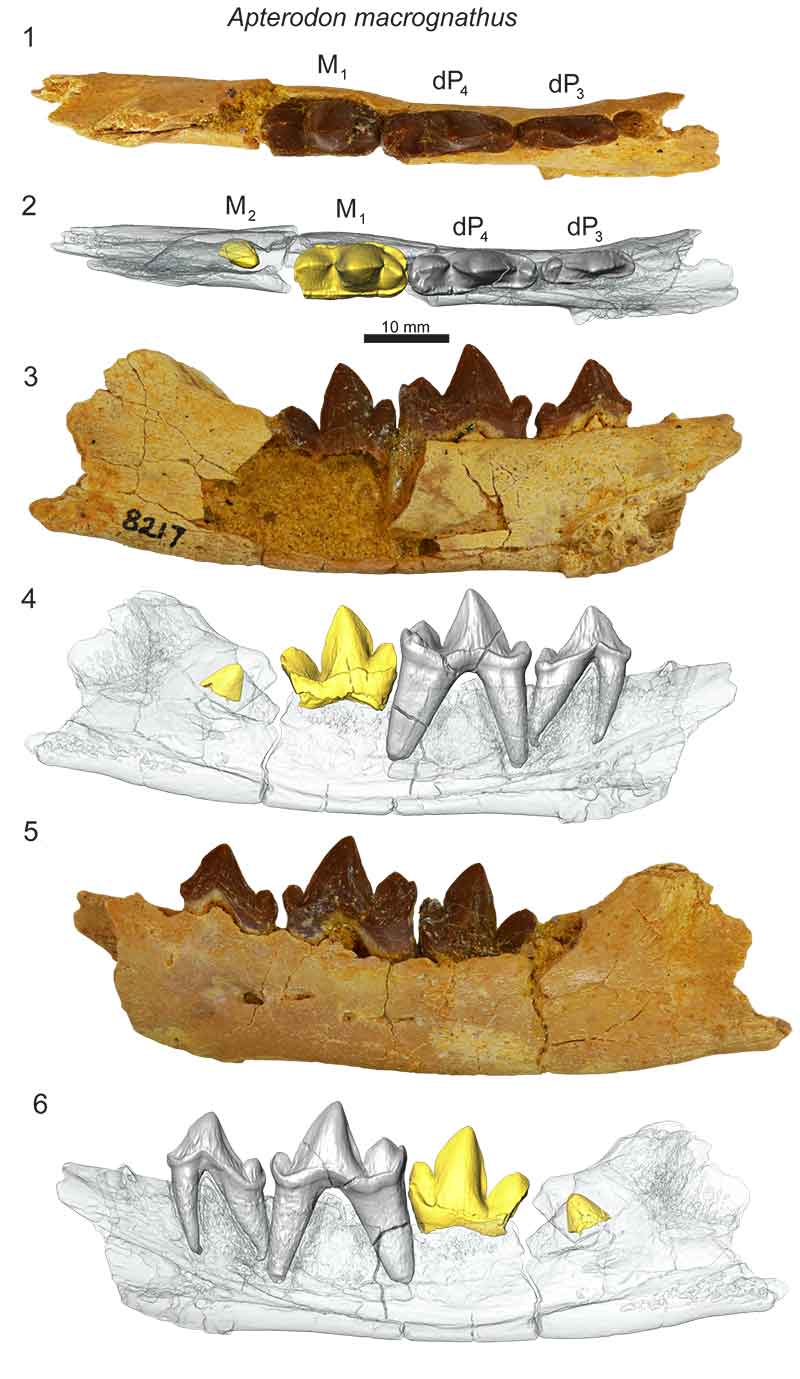 Many of the selective forces that influence the evolution of a lineage act on both juveniles and adults. We know a lot about the morphology of extinct adult mammals, but we still have a lot to learn about the important transition from the juvenile to adult phase of the life cycle for many extinct lineages. With a careful examination of museum collections for undescribed or unrecognized specimens of juveniles and with the use of CT scanners, it is possible to explore more of the developmental history of a lineage and gain a more complete understanding of the factors that influenced the evolution and extinction of the group.

Amy: What was your inspiration behind this project?

Authors: A single specimen kicked off this investigation. Nancy Stevens and her team found the cheek-bone of a carnivorous mammal during an expedition in the Rukwa Rift Basin in Tanzania. She invited co-author Matt Borths, who had recently completed his dissertation on hyaenodont evolution, to take a look at the specimen. It looked hyaenodont-ish but there was something a little odd about the shape of the single tooth it preserved, and in talking with colleagues, Borths and Stevens realized it looked more like a baby tooth than an adult tooth. Other specimens in the museum collection in Nairobi looked similar, and some of those specimens also preserved bits of the developing adult teeth in the space above the teeth that were already in the jaw. That confirmed that these teeth were baby teeth, and with that knowledge, suddenly there were deciduous teeth everywhere in the museum collections! Very few deciduous teeth of hyaenodonts had ever been described before. We described the Tanzanian specimen in the open-access journal PLOS ONE. We wanted to share what we had learned about the shape and eruption of teeth in the relatives of Pakakali, the hyainailouroids, so this study considers the entire group, rather than a single genus. 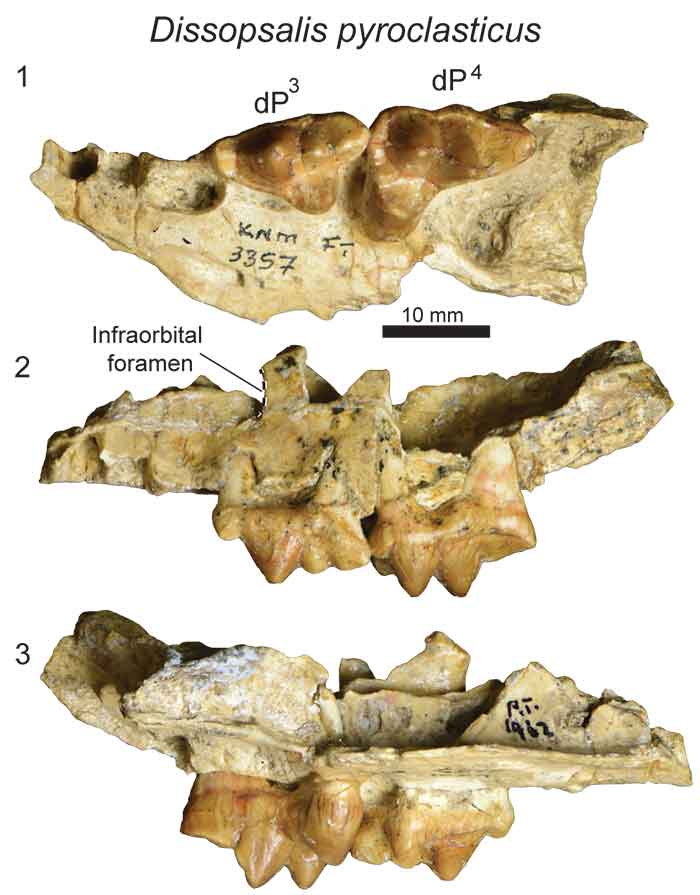 Amy: Did anything surprising or unexpected happen during your research?

Authors: We had no idea how many “puppies” existed in the hyaenodont fossil record. We had both been to the collections in Nairobi, London, and at Duke University many times, but we kept discovering more material with each visit. In March we had a draft of this manuscript ready to submit. Then we took a research trip to Kenya for a different project, and found the cast of the deciduous dentition of yet another taxon (Anasinopa) so we stepped back, described it, and rolled it into the discussion and phylogenetic analysis. Before submitting the final draft it was like we needed to dump out our pockets to make sure no baby hyaenodonts were still hiding from us. Sure enough a new one emerged and it became a manuscript we recently published in the journal Historical Biology!

So by far the most surprising thing we discovered was how abundant juvenile specimens are in the hyaenodont fossil record. One reason for this may be that unlike most mammals that reach adult size with their adult teeth, hyaenodonts seem to have decoupled skeletal maturity from dental maturity. That means what would have looked like an adult hyaenodont could still expect a few more visits from the tooth fairy, a result also found by Katharina Bastl working on a different group of these animals that lived in what is now Europe. All of the baby teeth in the fossil record simply reflect that more hyaenodonts in the fossil record were in the midst of dental development, dying off as skeletal adults but not dental adults. 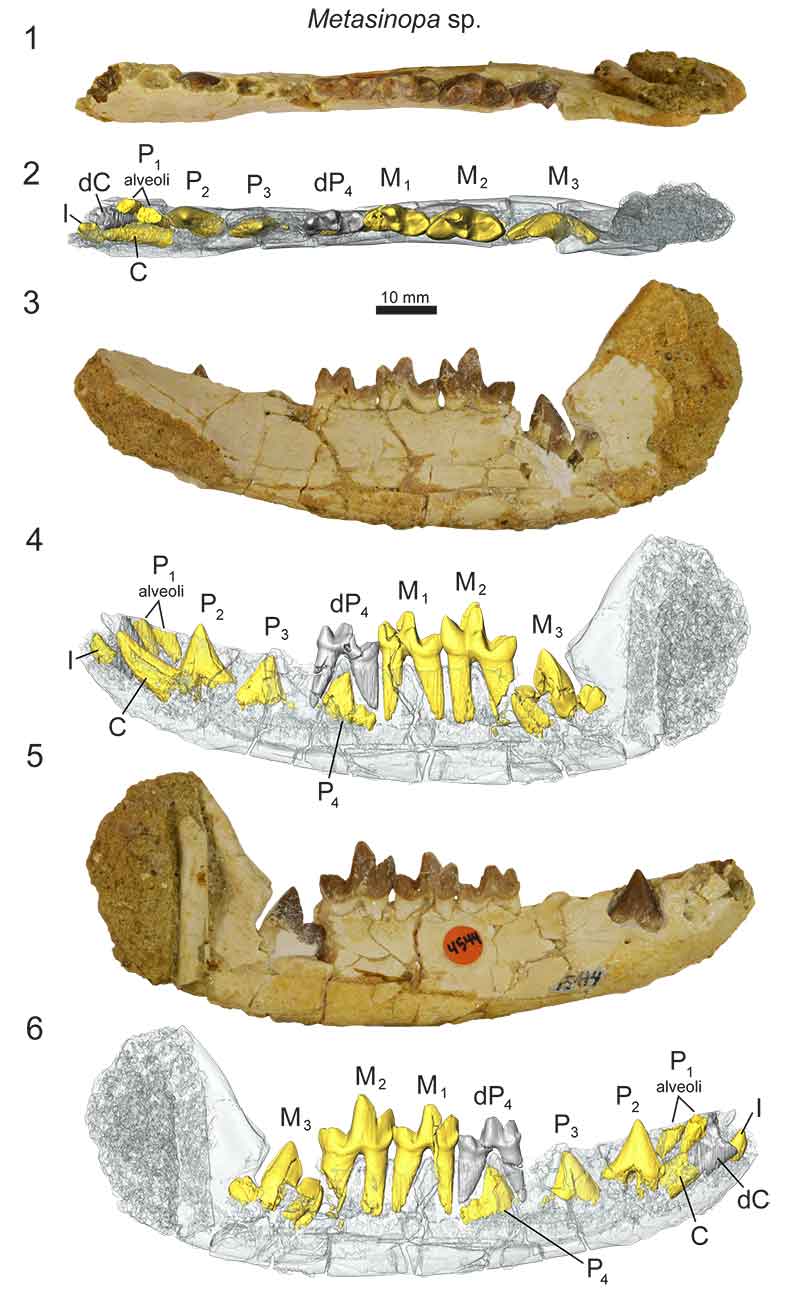 Amy: How do your results affect future research?

Authors: Modern carnivorans have only one set of specialized meat-slicing teeth on each side of their mouths. They need to keep this one pair sharp to last a lifetime. They also have one set of deciduous meat-slicers, but they replace these pretty quickly. Extinct hyaenodonts had three on each side and they kept their deciduous set for a longer time than modern carnivorans. This means they can wear down their meat-slicing teeth and still have back-ups. It seems like a great dental set-up for carnivorous mammals, but it wasn’t enough to allow hyaenodonts to survive. Sorting out the factors that drove hyaenodonts to extinction, researchers will need to address the differences in development and morphology between hyaenodonts and true carnivorans, the two most diverse groups of terrestrial meat-eating mammals.

Amy: What are the implications of your research beyond paleontology?

Authors: Carnivorous mammals are among the most threatened species in modern ecosystems as economic and conservation goals clash over how to use and preserve terrestrial habitats. This study contributes to a larger understanding of the evolution of carnivorous mammals and the vital ecological roles they fulfill in those ecosystems. Threatened carnivorans – wolves, big cats, bears, and hyenas – inherited their modern roles from hyaenodonts. By unraveling hyaenodont evolution, we hope to improve our understanding of the factors that shaped the evolution of modern carnivorans. 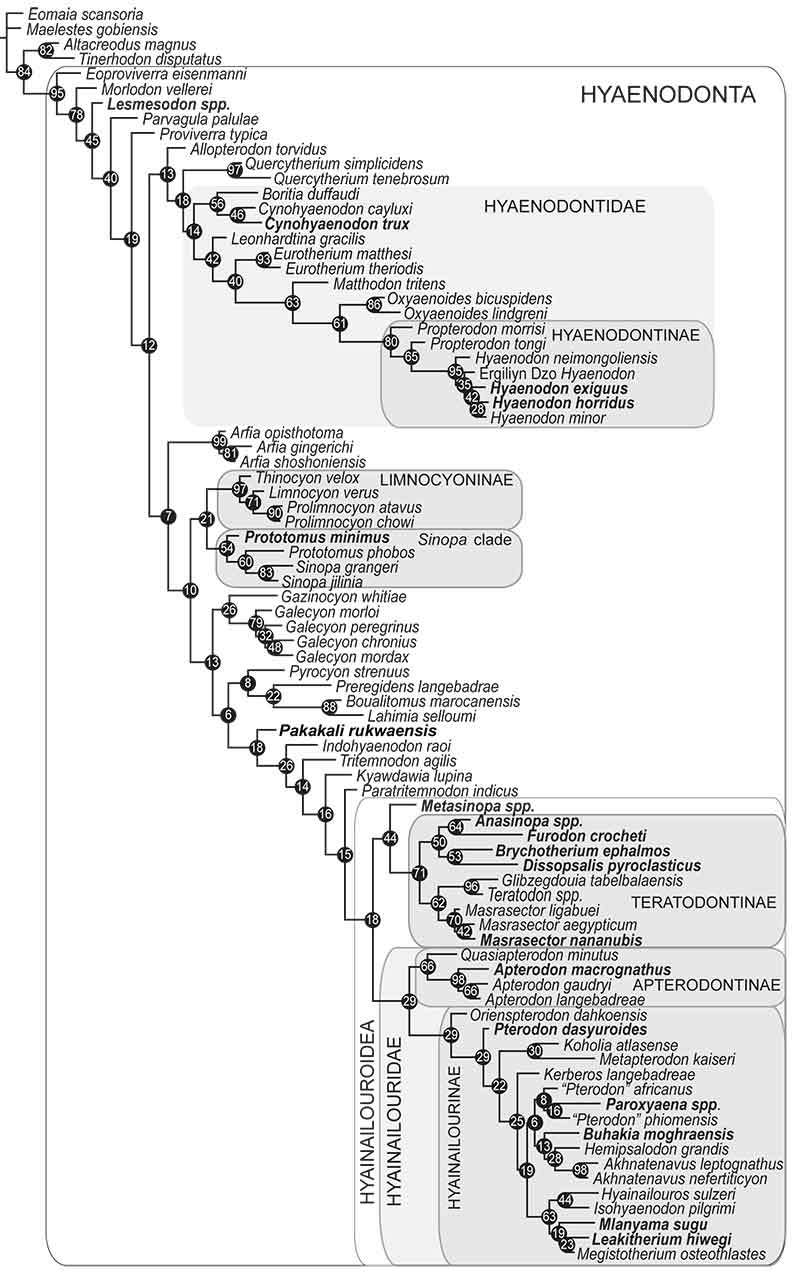 Figure 12: Results of the phylogenetic analysis of Hyaenodonta character-taxon matrix including deciduous dental characters. Results are visualized as an “allcompat” (majority rule plus compatible groups) consensus tree. Posterior probabilities (PP) are placed over each node. Bold taxa are scored for deciduous dental characters. Major, named clades recovered or discussed in this analysis and recovered in other analyses are illustrated.

Amy: Okay, last question, why did you choose to publish your results in PE?

Authors: We chose to publish in PE because we wanted to publish many high-quality images of the specimens we were describing. We also wanted to present the morphological descriptions of each specimen so they could be easily found and searched by other researchers in the main body of the text. In another journal, it may have been necessary to tuck some of that descriptive material into supplemental materials. Further, we want researchers around the world to have easy access to this manuscript so they can make comparisons in their own collections, further revealing the varied morphology of hyaenodonts throughout development.

We have each used electronic publishing for many previous projects. The greatest advantage of electronic publishing is the speed of publication from acceptance to publication. It is also instantly and widely available to other researchers who can view the images at a high resolution and search the complete text of the manuscript without running into a paywall. As researchers we see few drawbacks in making our work widely accessible to other researchers and the wider public that partially supported this study.

This research was funded by The Explorers Club, the Society for Integrative and Comparative Biology, the Leakey Foundation and the National Science Foundation (BCS- 1638796; DEB-1311354; DBI- 1612062).