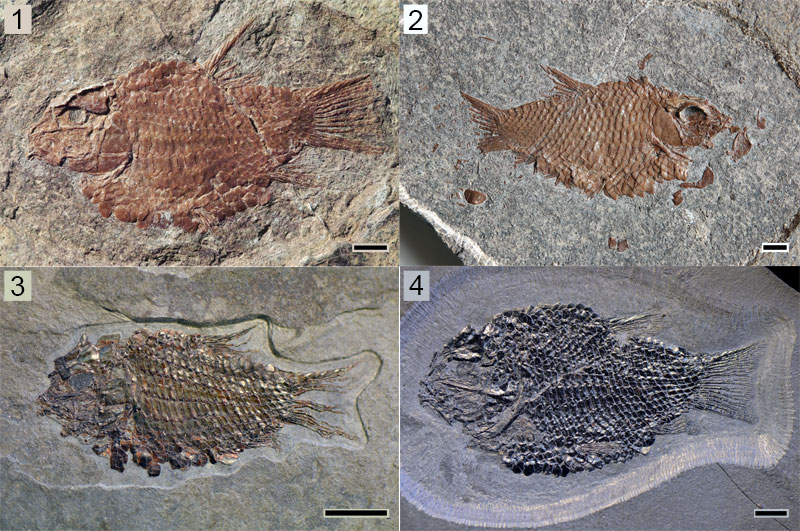 These fish are amongst the oldest relatives of the modern gar fish, whose ancient lineage is depicted below as the order Lepisosteiformes (shaded in green). Their sister group, of which Eosemionotus belongs (branches depicted in light blue), is known as the Semionotiformes (shaded in blue). These two groups diverged from a common ancestor in the Early Triassic. Semionotiformes were very diverse through most of the Mesozoic and became extinct just before the K-T boundary during the Late Cretaceous. Their sister group, Lepisosteiformes, was able to persist and there are seven known species of gar today. 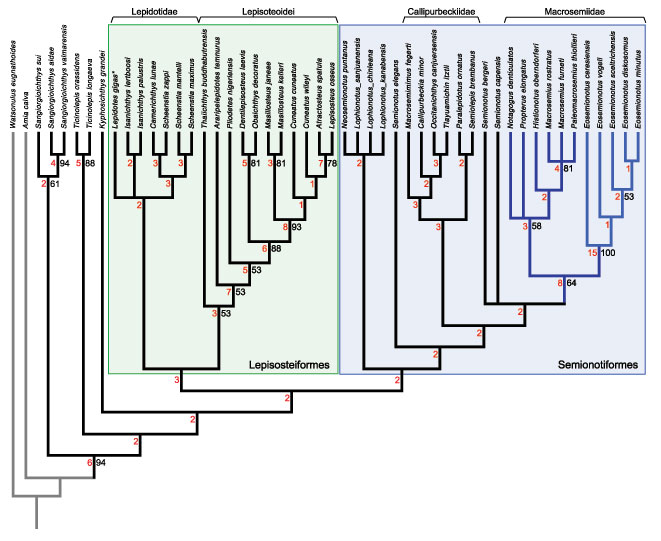 Strict consensus tree of 16 most parsimonious trees. Tree length = 968 steps, consistency index = 0.380 and retention index = 0.645. Bremer indexes and bootstrap values larger than 50 are indicated with red and black numbers at the corresponding nodes, respectively. Macrosemiid branches are indicated in blue, with the branches corresponding to the five species of Eosemionotus in light blue.

For palaeontologists, determining species can be tricky since rarely a fossilized specimen will be completely preserved. Morphological differences provide some of the best clues for fish taxonomy. Morphology can also sometimes infer habitat or diet preferences. “When species are very closely related, morphological differences are usually minor. Features like the relative position of the fins and the number of rays in one or more fins usually vary between species, but morphology might also vary within the same species,” explains López-Arbarello. Analyzing the distribution of morphological features is key, since different populations or individuals of the same species may have slight variations of physical traits. The cladistic analyses within this paper are based on morphological differences between species and helps solidify the inclusion of macrosemiids within the order Semionotiformes.

A Dive into Eosemionotus Ecology

Dr. López-Arbarello explains “the Monte San Giorgio at Lake Lugano of Switzerland is the most intensively studied and best-known record of marine life during the Middle Triassic Period. This represents one of the most important windows to study the process of life recovery after the largest episode of mass extinction at the Permian-Triassic boundary about 250 million years ago.”

In the Middle Triassic, these fish species likely would have inhabited shallow marine environments along the coast of the Tethys sea. Small islands would have dotted the shoreline surrounded by carbonate platforms with volcanoes looming just off in the distance. Eosemionotus would have flourished along the sandy coasts and warm lagoons “preying on worms, soft-shelled invertebrates, and possibly algae too,” explains Toni Bürgin. This picturesque landscape may have resembled modern day Bahamas or Maldives, except modern coral reefs would have been exchanged for other primary reef building organisms such as members of the calcareous algae genus Diplopora.

“The presence of these species indicates well established ecosystems and indicates organisms were capable of developing complex ecological networks. This evidence suggests that the biosphere recovered astonishingly fast after the most dramatic phase of extinctions in the history of our planet,” says López-Arbarello.

Through analyzing their phylogenetic relationships, they were able to determine that the oldest named species of Eosemionotus, E. vogeli, originated from the Tethys sea and migrated into the Germanic Basin. It is likely that the migration of E. vogeli led to further speciation of the Eosemionotus genus, but the complete evolutionary history of this group will remain a mystery until older occurrences of the species and other records of the genus are fully studied. 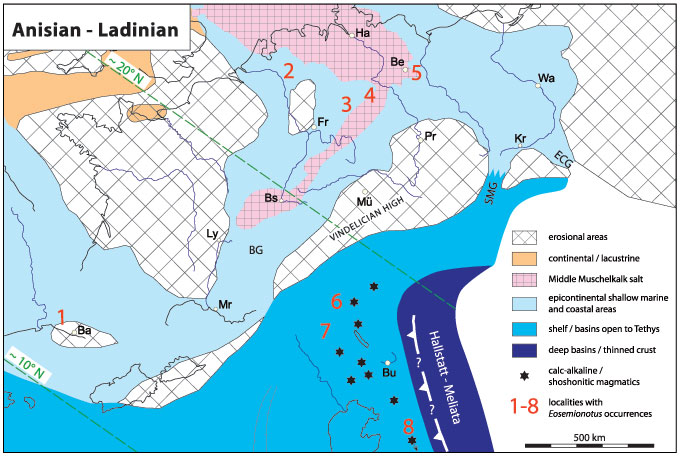 The discoveries summarized here were made possible through a collaborative team effort of combined expertise and, thus, different viewpoints of the research. Dr. Adriana López-Arbarello and Dr. Toni Bürgin are fish experts and work out the taxonomy, while Dr. Rudolf Stockar and Dr. Heinz Furrer are able to add geological and paleoenvironmental context for each species. Together these efforts provide the tools allowing them to shape a possible scenario in which this fish evolved.