Why the strange nose?

Why the strange nose? The peculiar case of Metarhinus and Sphenocoelus

Brontotheres (also known as titanotheres; Family BRONTOTHERIIDAE) are a family of extinct relatives of the horse and rhinoceros that lived approximately 35-55 million years ago in what is now North America and Asia. They lived during a period of time known as the Eocene Epoch (56 to 33.9 million years ago). Many had peculiar, forked-horns. Some grew to the size of small elephants. The low-crowned teeth of members of the family suggest that they were obligatory browsers (leaf-eaters). They inhabited forested regions, although the very large forms of later times (Chadronian, the latest age in the Eocene Epoch) would probably have inhabited more open meadow-like ground.

Two genera Metarhinus and Sphenocoelus (also known as Dolichorhinus) are particularly interesting. Members of the two genera were relatively small compared to most brontotheres and had little or no horn development. Species of Metarhinus were about the size of a tapir and while species of Sphenocoelus were a little larger. However, it is their usual nasal anatomy which radically changed the way they breathed that is completely unique and found in no other creatures known to science.

Rather than the airstream passing on either side of the nasal septum for these brontotheres the air was channeled through its center and exited into the throat through a new opening. For the unfamiliar, the nasal septum is the wall inside the nose which is well-known for becoming bent in humans, a condition referred to as a deviated septum. The lower part appears to have become modified to channel air passing through, or in some cases over, the vomer (See figure below).

A recent paper published in Palaeontologia Electronica by Dr Bryn J. Mader concludes that this unusual nasal anatomy was an adaptation to assist with the sense of smell. Currently, two hypotheses exist to explain this nasal anatomy. The first suggests that this unusual arrangement was an aquatic adaptation to aid in feeding on submerged plants. This hypothesis suggests that the adaptation separates the airstream from the mouth, which often might be filled with water. The second hypothesis, the olfaction hypothesis, posits that the odd nasal anatomy was an adaption to assist with the sense of smell. A hypothesis which the recent analysis by Dr. Mader supports.

Dr. Mader explains that there are two important problems with the aquatic adaptation hypothesis:

“Firstly, there was a membrane of soft tissue (the soft palate, which is part of the roof of the mouth) that already separated the mouth/throat from the airstream in the region where the airstream emerges from the skull.”

This would suggest that a specific nasal adaption is not needed for that purpose. Secondly Dr. Mader explains that the horse (a relative of brontotheres), cannot breathe through the mouth at all. Instead of what one would expect, it only breathes through the nose!

“If brontotheres were the same, then there would be no need to separate the mouth from the airstream because the two were already completely separated. The modern-day Black Rhinoceros (another brontothere relative) has a similar limitation and can only breathe through the mouth with great difficulty.”

Dr. Mader also explains that the environment in which Metarhinus and Sphenocoelus may have lived in probably contributed to the suggestion that the nasal anatomy is an aquatic adaptation given that both genera appear to occur near rapidly flowing streams.

This would suggest that the olfaction hypothesis is currently better supported. If as is usually the case, the air stream was to exit the nasal cavity at the usual location (the internal nares) the air would not typically reach the olfactory epithelium. Hence the sense of smell might be negatively impacted. However, Dr. Mader points out that the unusual modifications in the anatomy of Metarhinus and Sphenocoelus aim the airstream directly toward the part of the nasal cavity where smell is sensed (the olfactory epithelium) thereby allowing for an improved sense of smell.

The process of completing such research can be fascinating although somewhat tedious. Dr. Mader states: “For me, the most fascinating part of this project was piecing together the three-dimensional anatomy from specimens that had been sectioned with a rock saw.” However, the preservation of the fossils ultimately provided some difficulties for creating some figures, particularly Figure 5:

“In the original photograph the rock inside the skull was very similar in color to the bone and it was difficult to distinguish between them. The rock in my published photograph was artificially lightened by adding a white masking layer over it, which had to be created pixel-by-pixel! It took about a week to complete.”

Dr Mader’s paper provides significant insight into the question of Metarhinus and Sphenocoelus’ unusual nasal anatomy. Thank you to Dr. Bryn J. Mader for contributing to PE and the PE blog. To learn more about these fossils, check out the original article here. 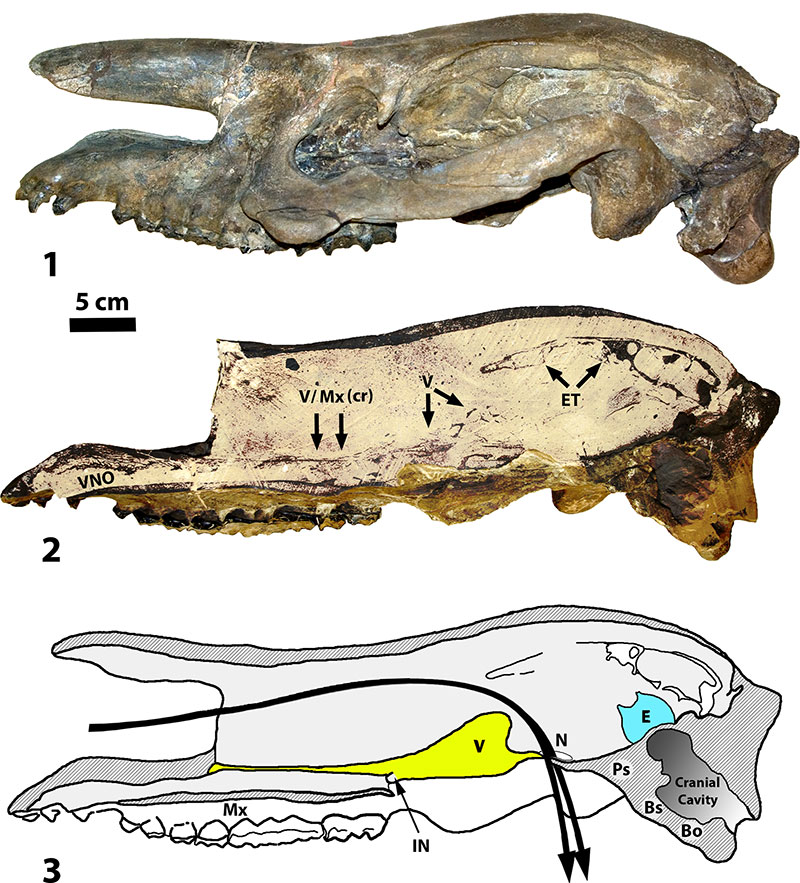