Brachiopod Faunas Through the Hangenberg Crisis

Mass Extinction events capture our attention. Whether it’s because of the astounding loss of life, incredible climactic events, or vast environmental differences compared to our modern world, they fascinate us. These events are extremely rare, having only occurred five times over the course of Earth’s 4,500,000,000 year history which are formally known as the ‘Big Five’. Although these get most of the attention, there have been many other ‘crisis’ events that still triggered significant losses of life.

The Hangenberg Crisis took place near the Devonian-Carboniferous boundary ~358 million years ago. Although it is not considered one of these ‘Big Five’, it still wreaked havoc wiping out 45% of life affecting most ocean dwelling creatures and spelled the end for the iconic Devonian reef building organisms called stromatoporoids and the armoured fish (placoderms). Global environmental changes were similar to those of the Kellwasser events, also known as the Late Devonian mass extinction, one of the ‘Big Five’. These included temperature and sea level fluctuations, marine anoxia/hypoxia (limited oxygen) indicated by the formation of black shales, and agitation of the global carbon cycle which is essential for all life.

The abundance and exceptional preservation of brachiopods, a now diminished phylum of marine invertebrates, throughout the Palaeozoic make them valuable to researchers studying mass extinctions or crises. These attributes allow the reconstruction of brachiopod presence through the rock record over time, their geographic ranges, and the chemistry of past environments, which all help recreate an order of events from disaster to recovery. 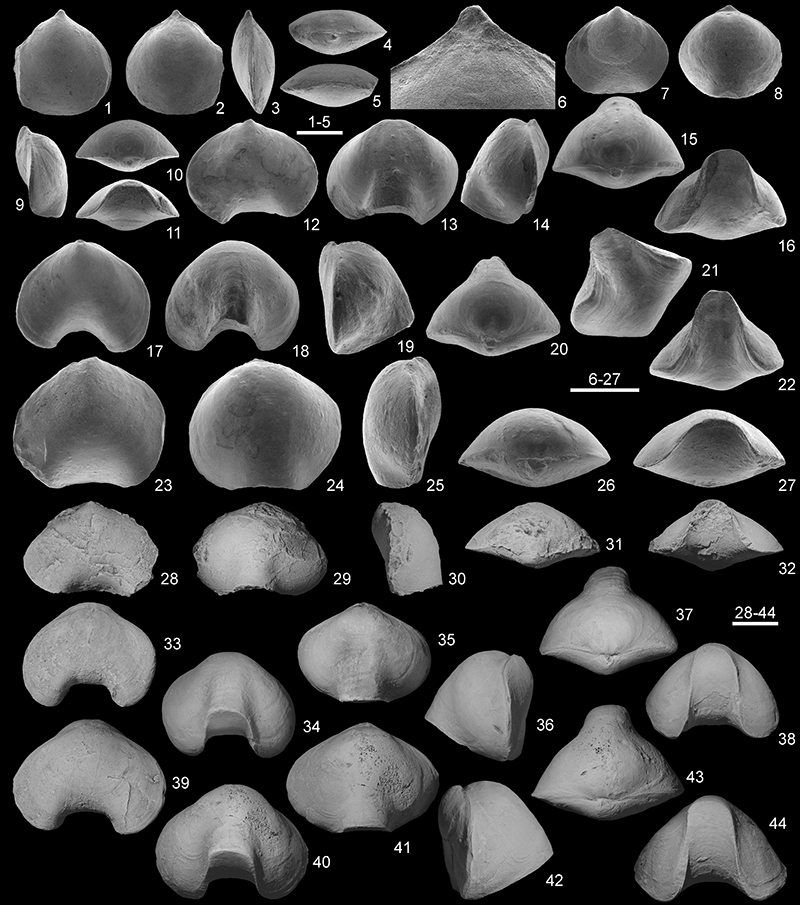 Brachiopods of the Late Devonian have been extensively studied for these reasons, however those from deep-water environments have rarely been regarded. Deep-water environments pose several challenges to organisms because they have limited access to necessities of life such as availability of oxygen and nutrients, which are more abundant closer to shore. These restrictions result in smaller sizes for critters living there, which poses its own challenges for studying them.

For this study, deep-water brachiopods from southeastern Thuringia (Germany) were used to gauge the effect of the Hangenberg Crisis on organisms in this environment. In order to do that, brachiopods from both before the crisis and after were compared to see the resulting effects.

Significant turnover of brachiopod types became apparent where rhynchonellides all but disappeared and were replaced by the fast colonization of small-sized productides and spiriferides. Rhynchonellides, productides, and spiriferides are all taxonomic orders of brachiopods, which vary greatly in shape. A clue to harsh environmental conditions were the small sizes of the brachiopods after the event since a reduction in size of organisms can reflect having to deal with stressful circumstances.

The Hangenberg Crisis clearly affected the brachiopod communities of both shallow and deep-water environments of the Late Devonian (Famennian) but it was less impactful than the Kellwasser Events at the end of the Frasnian where several brachiopods became extinct (Atrypida, Pentamerida). Being able to assess deep-water environments helps clarify the full extent of the crisis, which was significant enough to cause rippling effects into communities that are often buffered from environmental changes. Further study of brachiopods from these environments will help improve our understanding of how crisis events, such as the Hangenberg, affect life in even the hardest to reach environments.

Check out the original article here!