The Devonian Period, known as ‘The Age of Fishes’, happened between 419-358 million years ago. The earth during this time was a warm global greenhouse environment where the first land plants were diversifying across two large continents named Euramerica and Gondwana. Even the first tetrapods (vertebrates with four limbs), our ancient ancestors, crawled out of the sea onto land during this time. The oceans flourished with life. Brachiopods, trilobites, and armoured fish (placoderms) were plentiful, and reefs blanketed shallow seaways. The reefs of the Devonian were much different than those we know today. Although there were some corals, reefs were primarily made up of sponges called stromatoporoids.

Such an environment was ideal for a large predator to reign king and one such predator was the Dunkleosteus. Dr. Zerina Johanson, an expert on Devonian fishes describes the formidable fish:
“Like all placoderm fish, the head and front part of the body in Dunkleosteus were covered in bony plates. It was clearly predatory, with jaws being dominated by large shearing surfaces. The reconstructed tail suggests it moved like fast-swimming sharks do today, indicating it was a speedy predator.”

Its size alone was something to be feared being nine meters in length, which is about as long as two Volkswagen Beetle cars! But how exactly did Dunkleosteus get so big and swim so fast making it such an efficient predator!? That’s exactly what Dr. Johanson is trying to figure out! 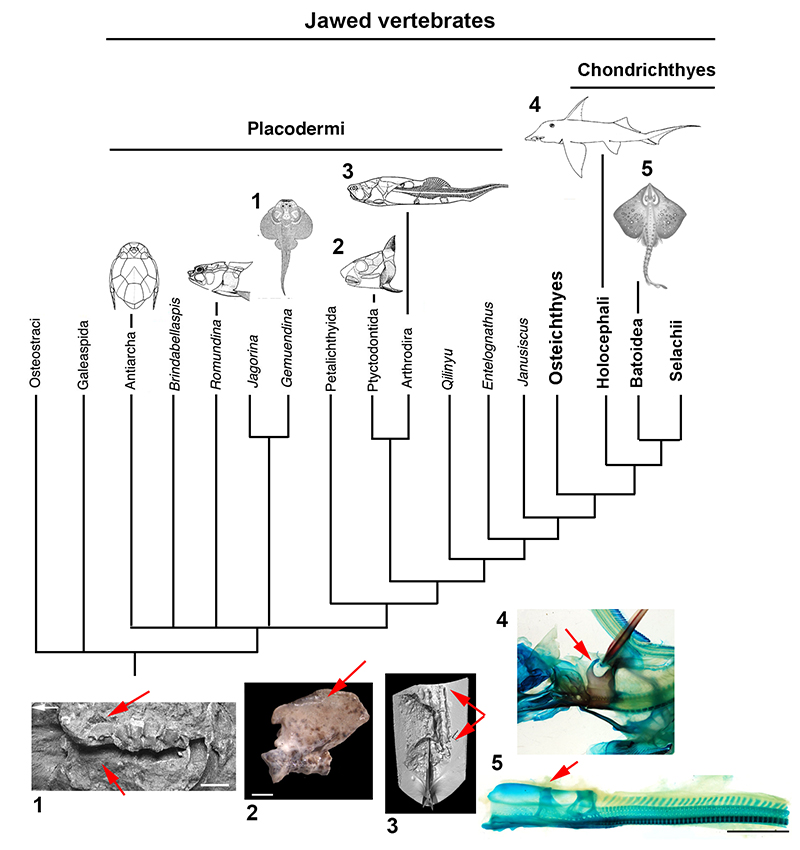 Phylogeny of the jawed vertebrates.

Dr. Johanson is interested in the variation and fusion of the backbone, a factor unique to jawed vertebrates (Phylum: Chordata, Subphylum: Vertebrata).

“If you think of your own backbone, it consists of a series of separate elements known as vertebrae. This is a feature not only in humans, but across a broader group of jawed vertebrates including mammals, reptiles, birds, amphibians, and fishes. The backbone extends from the head back to the tail and fusion of these vertebrae occur throughout the backbone providing specialized uses. For example, in humans our sacrum (backbone associated with the pelvis) is fused together and in birds a large portion of the backbone is fused to aid in flight.”

When vertebrae fuse together near the head of an organism it is called a synarcual. Dr. Johanson explains “for skates and rays (Class: Chondrichthyes) the synarcual functions to support their large pectoral fins. In cartilaginous fishes, such as ghost sharks, chimaeras, and rabbit fish (Class: Chondrichthyes, Subclass: Holocephali) the synarcual helps support the dorsal fin and associated spine. In placoderms with a synarcual, it would have acted to strengthen and support the body with respect to the head.”

Our own human backbone has distinct sections. Starting from the head Dr. Johanson lists the sections as “the cervical (neck vertebrae), thoracic (where ribs attach), lumbar (lower back), sacral and caudal (tail) regions. This variation allows each section of the backbone to have specific functions, for example the thoracic section supports the ribs to protect our organs and also aids in breathing”.

Dr. Johanson is also interested in how vertebrae mineralize. All vertebrates have a backbone made of cartilage during development which later hardens with the help of specialized cells called osteoclasts. The hardening and fusion of vertebrae strengthens the backbone occurs predominantly in jawed vertebrates, including placoderms like Dunkleosteus. “This is an important distinction to study since it could have been an advantage for jawed vertebrates, leading to their evolutionary success” says Johanson. 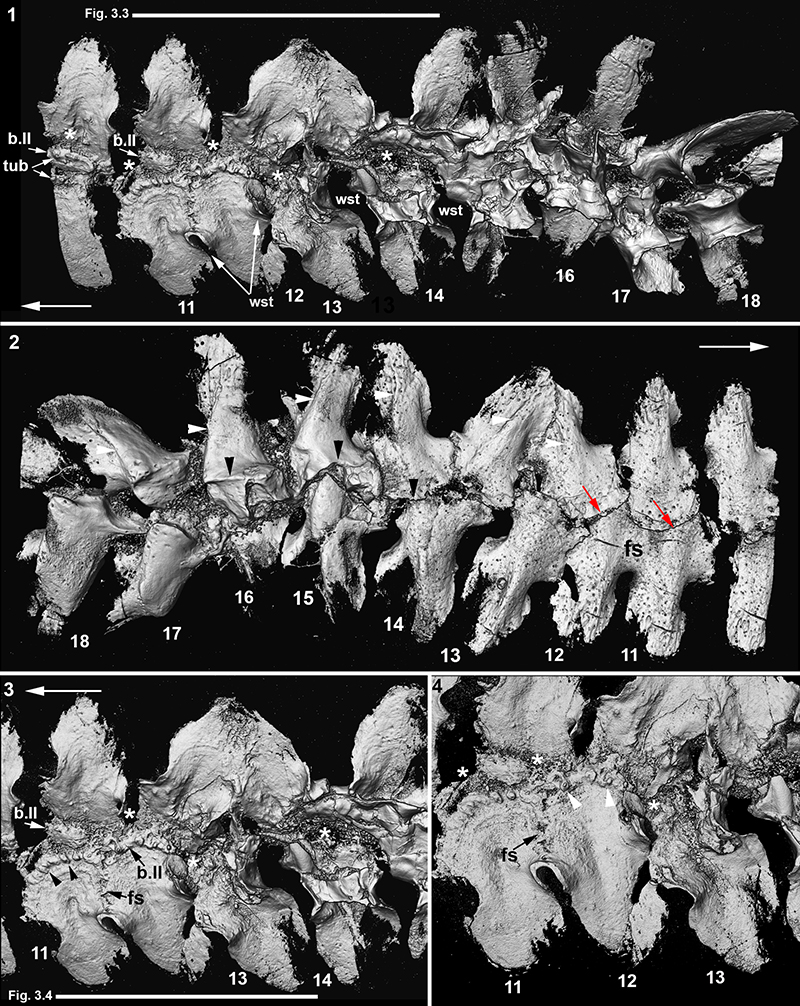 This particular specimen of Dunkleosteus, being exceptionally preserved, could help study this distinction. Dr. Johanson shared “we could see the internal part of the synarcual, which gave us particularly fine detail of how the vertebrae were changing and how bone was being deposited in these modified vertebrae to fuse vertebrae into the synarcual”.

Placoderms, like Dunkleosteus, represent the first jawed vertebrates to evolve. Since vertebral fusion is characteristic of jawed vertebrates, this makes placoderms ideal to study how this transition happened and hopefully compare to other unique vertebrate backbone variation.