There is a recurrent question asked of palaeontologists: “If someone already wrote a paper about it then why do you need to review it again?” However, the up to date information resulting from revision of previous taxonomic descriptions from previously published work is often crucial for further research. Taxonomy (the science of the classification of organisms) and taxonomic revision (where scientists reassess the scientific names of an organism) underpins the vast majority of palaeogeographic or palaeoenvironmental investigations.  A recent paper published in PE by Dr Yves Candela and William R.B. Crighton demonstrates this by reviewing a collection of described nearly 41 years ago (1978) from the North Esk Inlier in the Pentland Hills, Scotland.

Scotland in the Silurian (~ 443.8–419.2 million years ago) could be described as a marine environment home to brachiopods, trilobites, soft corals and more. One paper which highlights the incredible diversity of the Silurian invertebrate faunas in the North Esk Inlier of Scotland is that of Lamont (1978). However, several issues identified since have resulted in the need to review the descriptions and even location information in this paper. In Candela and Crighton’s recent PE paper the taxonomic names of these specimens are compared with more recently described species and properly illustrated where necessary. Dr Yves Candela and William R.B. Crighton have also made an attempt to give more precision on the localities original described in Lamont’s article based on the various labels accompanying the specimens in storage at the National Museums Scotland.

In order to understand the need for further research we must first understand the history of the collection itself. Put briefly, the Lamont Collection was extensive with numerous of specimens from the North Esk Inlier. In the last 30 years of his life Lamont lived in a small cottage in Carlops, near North Esk Inlier. Unfortunately, as Candela and Crighton point out, several specimens went missing after Lamont’s death.

Parts of his personal collection (from the east of Scotland and the Pentland Hills) was transferred to the National Museums’ collection or others were registered a second time from one of the historic collections listed above when the original information was lost or mislaid. Other specimens were divided between several other museums as directed by the executors of Lamont’s estate. Many of the specimens label’s provided additional information to that published by Lamont and in many recent years new interpretations of many of the specimens described by Lamont have been made.

The ever-changing nature of taxonomy

“Taxonomy is also not a static science. It evolves constantly and therefore using database, investigating palaeoenvironments or palaeogeographic for example, with up to date information is essential. This is the reason why the revision of taxa that were described decades ago is important if one wants to compare data that can be comparable. How can, in the same database, newly described faunas be compared to faunas described sometimes half a century ago (if not older), using an outdated taxonomy?”

Revising fauna is also crucial for our understanding of these fauna. Dr. Candela points out that the most striking example of this are the cases of Plumulites and Mirmor (see below). These taxa were initially identified as echinoderm plates and fish scales respectively but now identified as annelid and a type of soft coral (octocoral), respectively. This completely changes our understanding of these organisms.

“Another positive point in revising faunas,” Dr Candela says, “is that many of the species described by Archie Lamont in his original publication are now regarded as junior synonyms of established species. This enables to understand a species geographical and stratigraphical extensions, rather than validate an unnecessary multiplicity of taxa.” 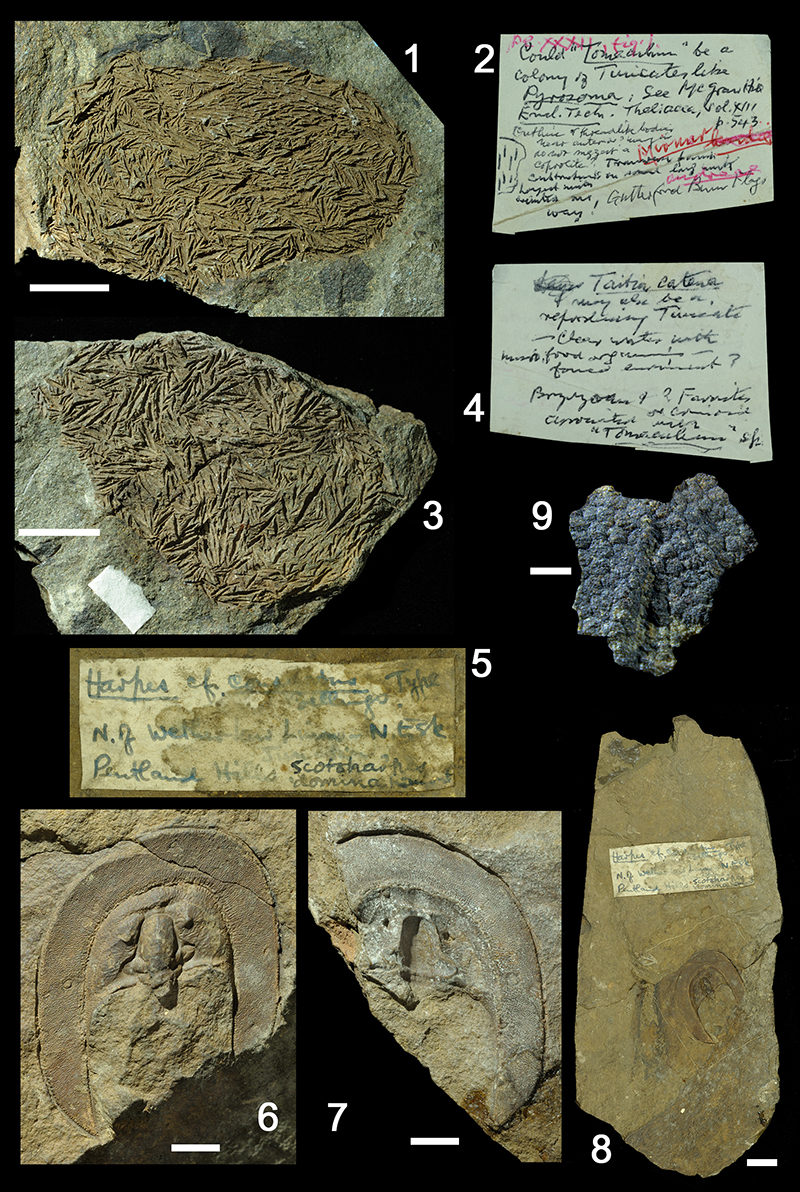 What’s on a label?

In their recently published paper Dr Yves Candela and William R.B. Crighton have been able to use additional information found on labels associated with specimens described by Lamont which was not included in the original paper. Speaking from a Curator’s perspective Dr Candela explains how essential publishing these label for the first time really is:

“Some of these labels identify specimens that were registered in the late 19th Century, 1876 to be more exact, and it can happen that, for all sorts of reasons – World War conflicts, collections moves for example – specimens are separated from their labels. Information on the label can be matched to the registration number written on the specimen itself and the two parts be reunited. In the present article, the labels pictured show most of the time reference to the illustration on the original publication. This is extra information that enables us to relate more confidently a specimen to a label and vice versa. Other labels have information crossed out and new information added, and often different types of ink are used. These are interesting in that you can witness the research process, one step at a time.”

In summary, this paper, like many taxonomic or synoptic revisions, contributed greatly to our understanding of these faunas. In the words of Dr Candela, “This contribution makes the information present in Archie Lamont’s 1978 paper useable by researchers interested in the palaeontology of Scotland and the Silurian period in general.” What better way to preserve the legacy of Lamont’s extensive collection than to ensure that the specimens described will contribute to our understanding of Scotland in the Silurian for years to come?