Sharks have been popularized in the media for decades, from the famous Jaws film of the 1970s, to more modern Megalodon movies, and even an annual dedicated Shark Week on the Discovery Channel. Humans have become wary of these creatures portrayed as man-eating machines and, honestly, giant jaws lined with rows upon rows of teeth do not sound like a particularly pleasant encounter.

Sharks are some of the oldest vertebrates on the planet, having existed more than 450 million years! Arguably some of the most intriguing examples of specialized shark evolution come from the late Paleozoic (358-251 million years ago).

Dr. Wayne Itano is a researcher on ancient chondrichthyans (a group of fishes whose modern representatives include sharks, skates, rays, and chimaeras) who recently published a PE article on the Carboniferous (359-299 million years ago) shark Edestus.

“What fascinates me about Paleozoic chondrichthyans, especially Carboniferous ones, is their diversity and their extreme differences from anything now living,” shares Dr. Itano.

Fossils of Edestus include mainly isolated teeth and a few tooth whorls (the ‘jaw structure’ with the teeth attached). Dr. Itano clarifies that “Tooth whorls are not jaw bones. Instead, they are tooth files, with the teeth joined at the elongated bases (roots). Since shark skeletons lack true bone, their jaws are made of cartilage, into which the tooth whorls are set.” The tooth whorl acts as a conveyor belt, where the outer-most tooth eventually is ejected, and new teeth are added at the inner end. 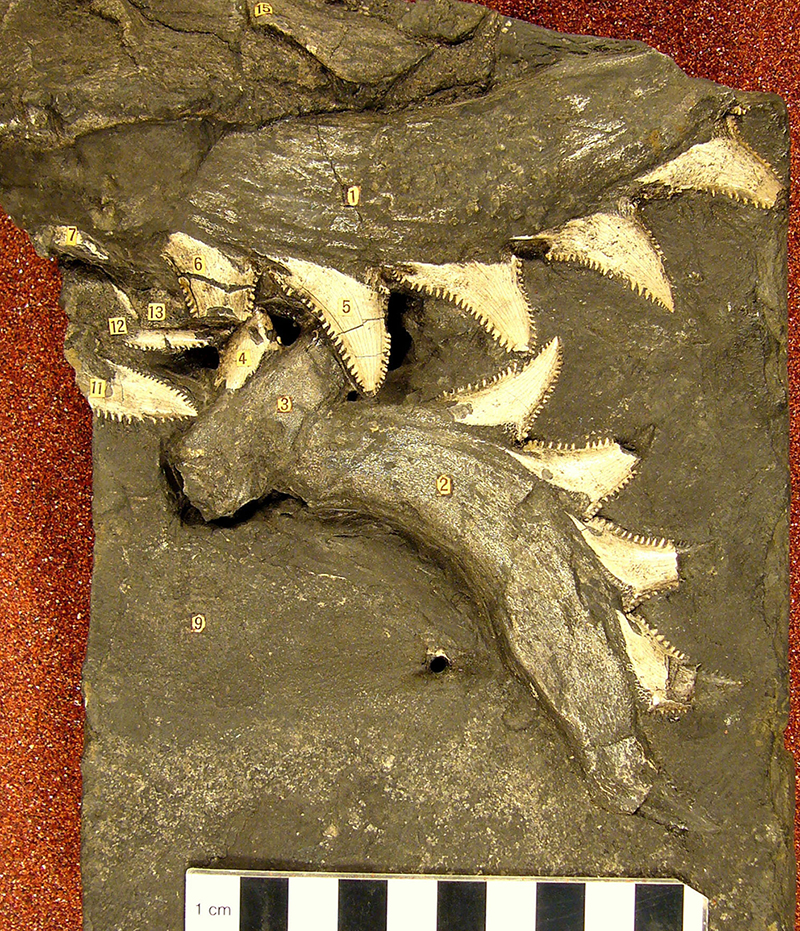 USNM V7255, holotype of Edestus mirus, (but which probably should be referred to Edestus minor), showing the tooth whorls belonging to the upper and lower jaws (scale in cm). Copyright © Smithsonian Institution, all rights reserved. Used with permission.

Very rough estimates of shark size can be made from teeth. For example, the teeth in the picture above probably belonged to a shark “1.8-2.7 meters long, a medium-sized shark by today’s standards. But other Edestus species might have been twice as long” states Dr. Itano.

This intriguing creature is the only vertebrate that had two opposing single rows of ‘scissor-like’ teeth. Lestrodus newtoni (originally called Edestus newtoni) is a species with a particularly strongly curved tooth whorl, and how it used the outermost teeth in feeding is not obvious, especially since it would not have been able to bring the outermost teeth of opposing tooth whorls together in order to cut prey between them. The question is, how would a mouthful of teeth in such a strange arrangement successfully feed on prey? 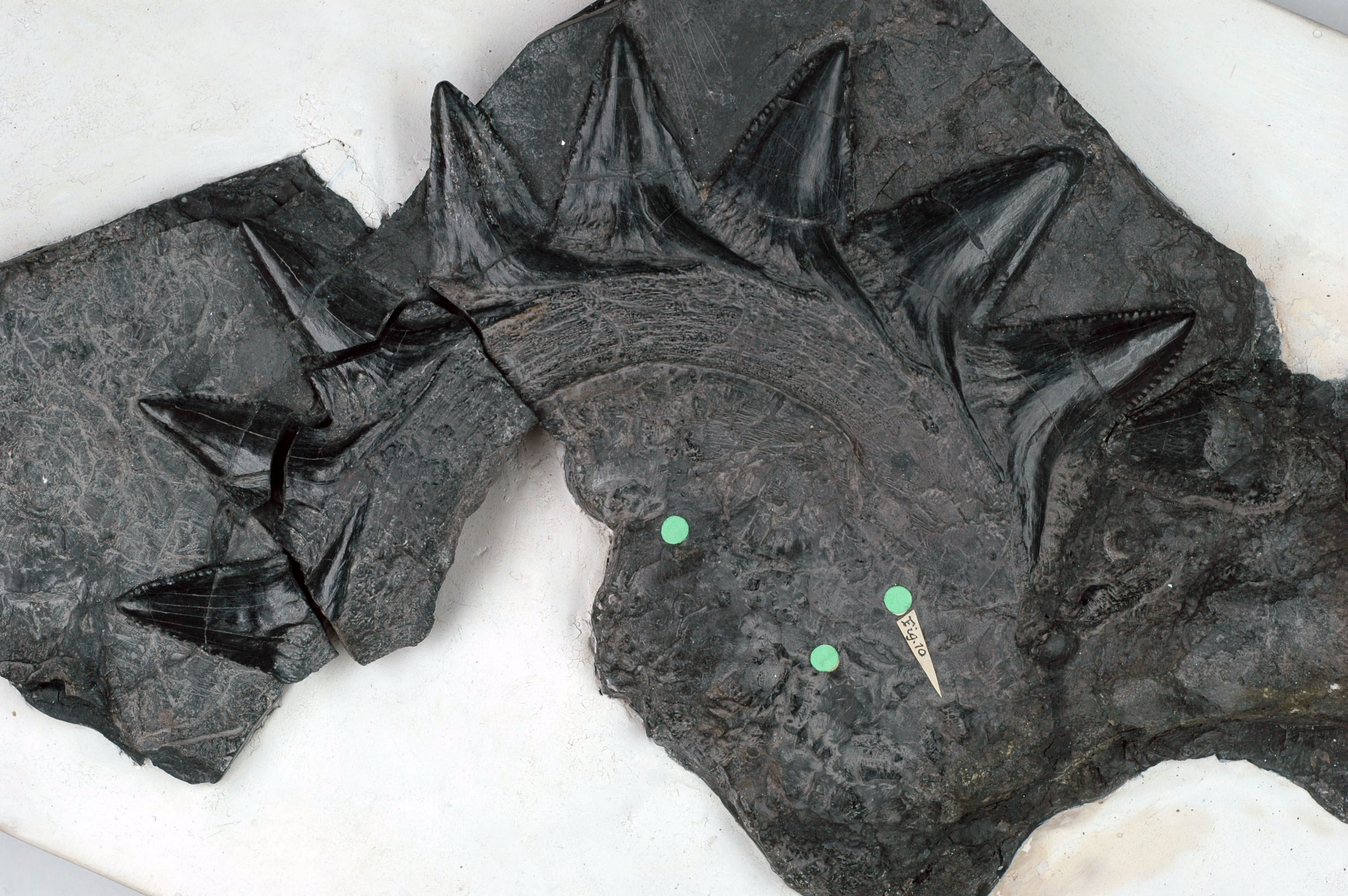 To test how Edestus might have used its tooth whorl structures, Dr. Itano conducted 2D microwear analysis, a method rarely used on shark teeth, to highlight the natural wear and tear on teeth shaped like those of the holotype of Edestus mirus (see figure 10 below).

“For this research, I was considering two possible functional modes for the teeth: “scissors-mode,” in which prey were cut between teeth of opposing jaws, and “vertical-slashing mode,” in which the teeth of each jaw cut prey independently of each other, with a vertical motion of the head. What I expected was that I would see either scratches oriented mainly from the tips to the bases of the teeth, if the tooth whorls operated in scissors-mode, or perpendicular to that direction, across the faces of the teeth, if they operated in the vertical-slashing mode” says Dr. Itano.

What he found was that there were scratches on the teeth oriented mainly across the faces of the teeth, which seemed to support the vertical-slashing hypothesis. Interestingly, some of the scratches were complex, including two or three closely spaced, parallel scratches. These complex scratches might give some clue as to the nature of the prey that had been cut with the teeth. 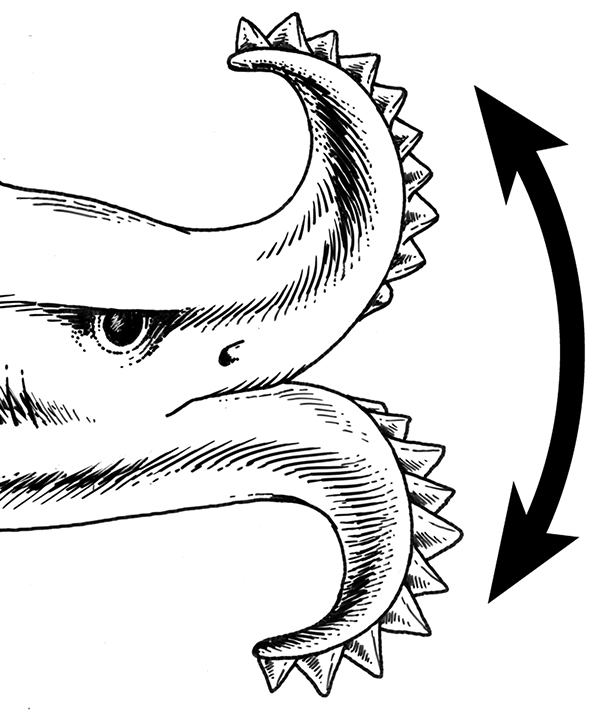 Reconstruction of the head of Edestus, illustrating the hypothesized, whole-head, vertical-slashing motion. The curvature of the tooth whorls is based on the holotype of Lestrodus newtoni. Modified with permission from copyrighted artwork by G. Raham, www.biostration.com.

However, these two modes do not exhaust all the possibilities.

“In 2004, Rainerl Zangerl of the Field Museum of Natural History suggested that Edestus moved its lower jaw forward and backward, so as to cut prey trapped between the jaws like a reciprocating saw” says Dr. Itano.

“Recently, Tapanila and coworkers have shown that Edestus heinrichi, the edestid species having the least-curved tooth whorls, had a jaw joint arrangement that would have allowed a reciprocating-saw motion. However, for a shark having tooth whorls as strongly curved as Lestrodus newtoni or Edestus mirus, it is hard to see how the outermost teeth could have been useful, other than in the vertical-slashing mode. It is possible that some species could have combined the scissors-mode and reciprocating-saw mode for the inner teeth with the vertical-slashing mode for the outer teeth” says Dr. Itano. 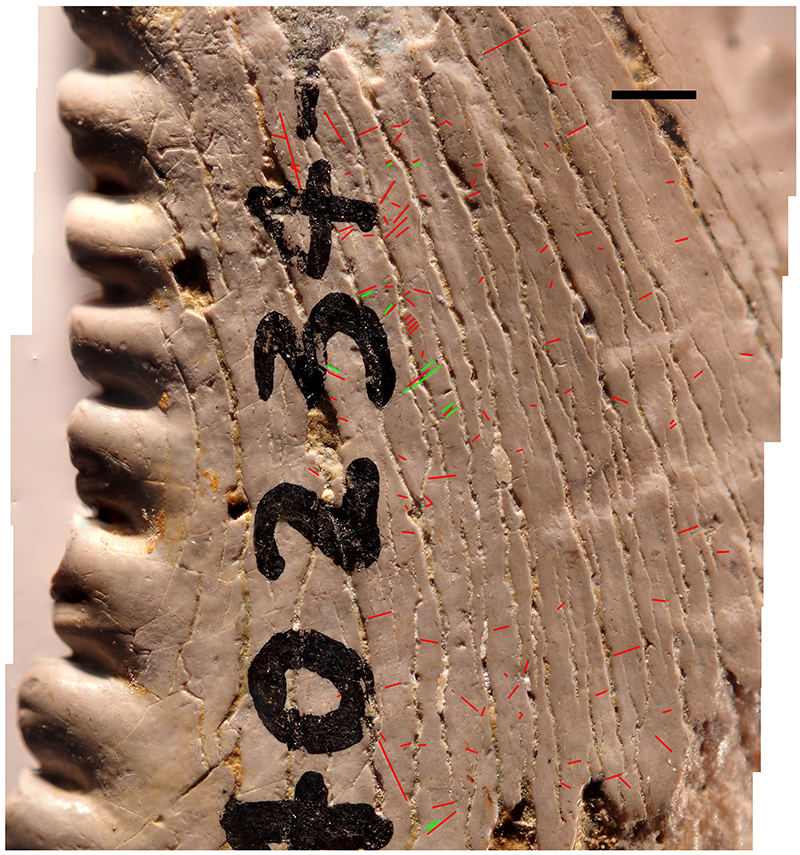 Figure 10 from the article, with scratches marked in red. Secondary or tertiary scratches that are parallel to and associated with another nearby scratch are marked in green. Scale bar equals 1 mm.

Fish, including other sharks, are the most likely prey of Edestus, but “shelled cephalopods, including nautiloids and ammonoids, would have been present and might also have been their prey” says Dr. Itano.
Regardless, these sharks existed for several million years before going extinct approximately 307 million years ago. “Although this time does not correspond to a mass extinction, it does correspond with a marine regression. If Edestus required shallow water for breeding, the loss of such environments might have led to its extinction” states Dr. Itano.

“Another possibility is that it was outcompeted by Campyloprion, a shark with a single large Edestus-like tooth whorl on the lower jaw, which first appears around the time Edestus disappeared” mentions Dr. Itano.
Although we may never know for certain how these ancient creatures captured their prey, new methods can provide valuable information about these fascinating creatures.

To read more about the research on Edestus you can access the original PE article here.