Marine Animals Tough it Out During Ice Age

Imagine you’re a snail living on the ocean floor…during an Ice Age. The sea temperature is drastically rising and falling as the Earth enters phases of glaciation and warming. The sea level is changing too, making your habitat deeper or shallower and often changing its structure entirely. How do species fare in this ever-changing world? And is their fate linked to their environment?

Dr. Barbara Seuss and colleagues sought to answer these questions in their recently published study in Palaeontologia Electronica. The researchers analyzed the biodiversity of bottom-dwelling marine invertebrates (bivalves, gastropods, and brachiopods) during the Late Paleozoic Ice Age (LPIA), a 100-million-year-long period in Earth’s history. “The LPIA was an extremely long phase with glacial alternating with warming conditions,” Dr. Seuss explains. “Unlike today, the continents assembled to a supercontinent, and that led to a different circulation system, which influences the atmosphere and weather system.” This resulted in drastic changes in temperature, sea level, and sediment input, putting species under immense pressure to adapt, or else face extinction. 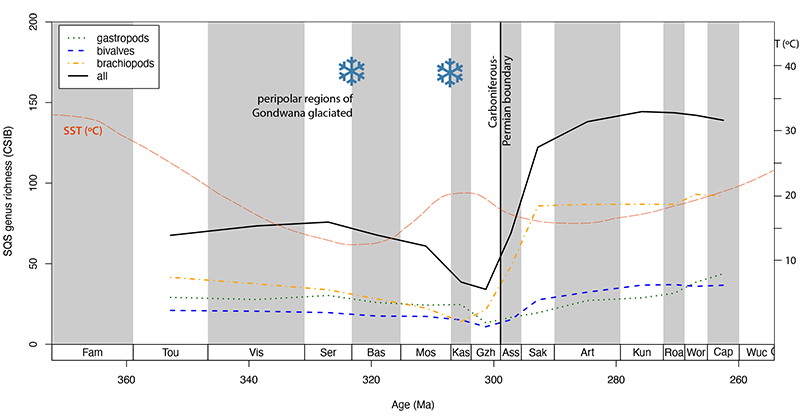 The researchers found that while the initial change in climate did lead to extinctions, environmental conditions had surprisingly little impact on biodiversity during the main glacial phase of the LPIA. Both extinction rate and the rate of new species emerging remained relatively low and stable despite fluctuations in temperature and other conditions throughout this long period. The trend was consistent across all different types of marine environments.

“A likely reason is that there were many generalists; these adapt easier to changing environmental conditions as their biological demands are less restricted/limiting,” the scientists explain. Generalists are species that can tolerate a wide range of conditions, habitats, and diets. A classic example of a modern generalist is the raccoon in North America, which can live in urban or rural environments and eat anything from nuts to insects to people’s trash. It turns out marine creatures of the LPIA were like raccoons of the past, toughing it out even in difficult conditions!

Studying diversity patterns over such a long time period is only possible through the efforts of countless paleontologists contributing to the fossil record and sharing their data. Dr. Seuss and colleagues’ data came from the Paleobiology Database, or PBDB. This open access data portal has over 1.4 million records, all accessible at the touch of a button to anyone with an internet connection!

“Of course, there are flaws and errors, but the PBDB contains the data entered by a wide range of paleontologists and thus captures a good overview of the fossil record,” says Seuss. “The more people are active and enter publications, the better the PBDB becomes and the closer we get to achieving a complete picture of the past.”

As digital tools make information sharing even quicker and easier, that picture of the past will continue to improve and allow for more exciting research projects. To read more about this study you can find the original article here.