Cuban caves have long been attributed to the Pleistocene epoch (2.5 million to 11,700 years ago). The basis for this designation is shaky. As Johanset Orihuela, one of the researchers on the study, explains, European and North American researchers in the 19th and 20th Centuries labelled the caves as Pleistocene based on their work on other caves in their respective countries of origin, which they assumed to be similar in age. The dating of these caves is important because they provide a maximum age for the deposits found therein. The age of the deposits and the fossils themselves, in turn, paint a picture of the timing of extinctions of Cuba’s native fauna. Of particular importance for extinct and extirpated animals in the Caribbean are last appearance dates (LADs) – the last known record of a particular species – since LADs are unknown for many species. Finding LADs will allow future researchers to better date other fossil sites and better compare fossil sites around the island.

While the area surrounding Cueva de los Nesofontes is not completely dissimilar from what it was in the recent past (although the well-developed old-growth forest is less prominent today), one major difference is the present-day absence of several endemic small vertebrate species, namely the extinct shrew Nesophontes major, Artibeus anthonyi, and Phyllops vetus. Additionally, several species (Psitticara eups, Colaptes cf. fernandinae, Solenodon cubanus, and Antrozous koopmani) still live in Cuba but are now locally extinct in the area around Cueva de los Nesofontes. The researchers uncovered other fossil material – a skeleton of a newborn dog (Canis lupus familiaris) – but this material was likely not deposited at the same time as the dizzying array of small vertebrates that make up the lion’s share of the deposit.

The fact that the majority of the vertebrate fossils in the deposit represent small vertebrates is not a coincidence. Joha Orihuela describes the deposit as being deposited by raptors, that is, the fossil accumulation is the result of generations of raptor pellets being regurgitated by predatory birds roosting near the mouth of the cave. In addition to contributing to the huge numbers of small vertebrate fossils found in Cueva de los Nesofontes, raptor-derived deposits are also important because raptors, especially multiple species of raptors on a relatively small landmass like Cuba where different habitats are so close together, provide a relatively complete sample of local small mammals and birds in a given area. Think of it as a rodent and songbird sampler platter. Having a complete sampling of local animals means that researchers can be more confident about conclusions they draw about the local animal community.

To better understand the world in which Nesophontes and the other fossil animals of Cueva de los Nesofontes lived and died, the researchers used radiocarbon dating to date the fossil deposit. To their surprise, they found that the cave deposit dated not to the Pleistocene, but to the late Holocene – between 600 to 2,000 years ago. Such a young date indicates that the animals found fossilized in the raptor-based deposit survived in the area surrounding the cave much later than previously thought. In fact, Nesophontes major and Artibeus anthonyi seem to have survived widespread in Cuba right up until European colonization of the island.

The researchers also used a method called stable isotope analysis. Stable isotope analysis is a research method that plays with the old idiom “you are what you eat (Fry 2006).” When organisms eat or drink, they incorporate the atoms of their food and water into their bodies. Food and water atoms come in varieties called isotopes that have slightly different weights. Because these isotopes have different weights, they segregate themselves during natural processes like photosynthesis. Due to this segregation, grasses and leafy greens tend to contain different isotopes of carbon. If other organisms eat these plants, they, in turn, incorporate these carbon atoms into their bodies. Knowing how isotopes segregate in natural processes allows researchers to infer what an extinct animal ate.

In the case of the current study, the researchers use stable isotope analysis to compare the diets of two bat species, Artibeus jamaicensis and Artibeus anthonyi. The bats appear to have been contemporaries on the island based on their positions in the stratigraphic layers in the deposit. Interestingly, when the researchers compared the results of the stable isotope analyses for the two species, the levels of isotopes of carbon, nitrogen, and oxygen were very similar, suggesting that the two species shared similar diets and levels in the food chain. The presence of two species of bats that seem to share diets makes it likely that the species would have competed for resources. Indeed, the paper notes that Artibeus anthonyi was found less frequently in the deposit than Artibeus jamaicensis. This could, as the researchers suggest, be the result of preservation biases (prey preference on the part of raptors, etc.) or it could very well be the result of competition between the two species. Artibeus jamaicensis may have been outcompeting Artibeus anthonyi. 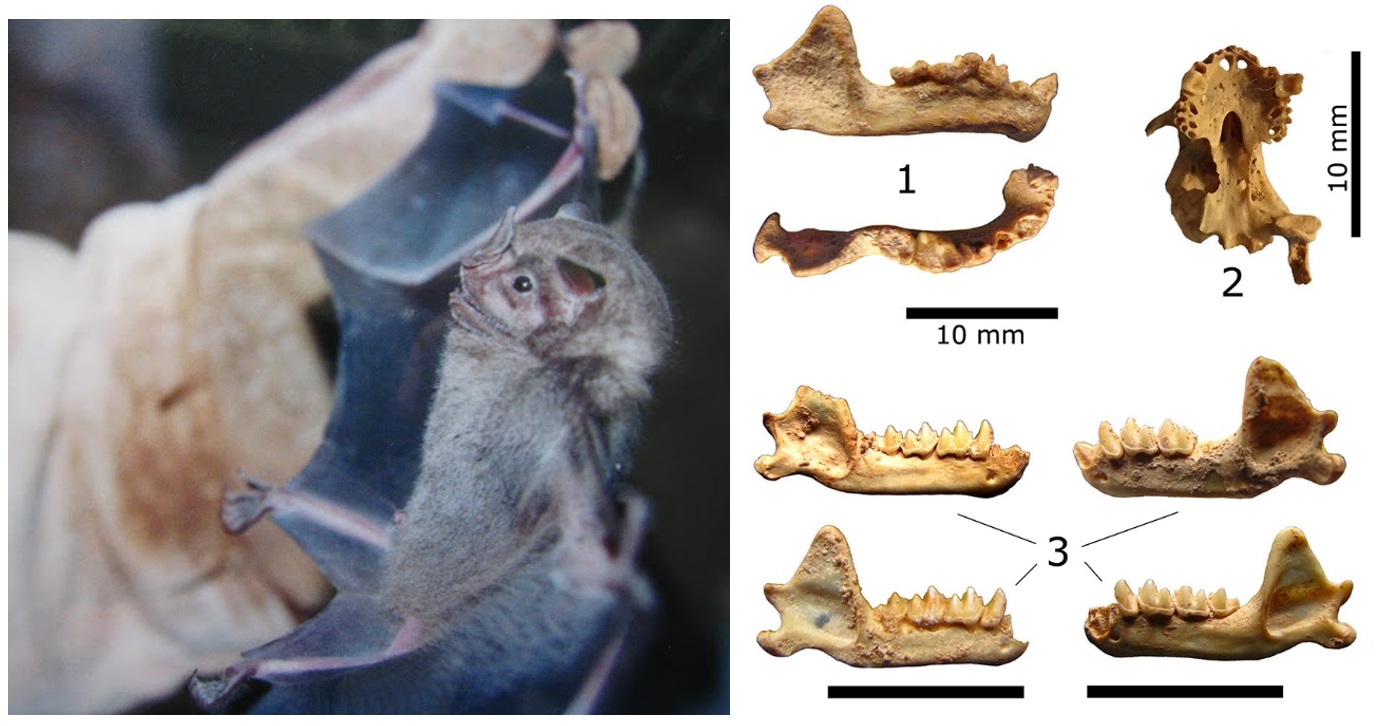 Stable isotope analysis can not only be used on animal remains. Sedimentary structures in the cave grow and incorporate carbon, nitrogen, and oxygen isotopes into their “bodies” too. Looking at the isotopic composition of the cave can provide insight into details about the local environment that animals cannot provide because while animals’ lives are short on a geologic scale, caves can “live” for thousands of years. Using stable isotope analysis on the cave itself, researchers discovered that the environment surrounding the cave experienced a “brief” but dramatic change. The oxygen isotopes in the cave suggest that that particular portion of the cave was deposited when environmental conditions around the cave were colder and drier, around 660 AD and 770 AD. Apart from this ~110 year period, other environmental signals such as the presence of mormoopid and vampire bat remains suggest that the local area was quite warm and wet, since these bats’ modern counterparts are strongly restricted by temperature.

Paleontology conducted in caves versus above ground posed its own unique challenges and, as evidenced by the rich deposit in Cueva de los Nesofontes, rewards. Johanset Orihuela describes the unique factors at play in cave paleontology, “Caves are dangerous places, and protection must be a priority of any expedition. Caves must be explored, mapped, photographed, measured, contextualized before any digging can begin, and that could take months. Permits are required, the equipment must be transported to places of difficult access. One must plan for all these obstacles. These expeditions are never without challenges. Between carrying bags of equipment, lighting, personal hygiene, and food, one must be adept at dealing with all kinds of critters that get in your tent, sleeping bags, and shoes. Others are attracted by your sweat or food. Some can be dangerous, as the local feral fauna of some areas, which include wild boars and dogs. Some places have poachers and hunters one must be on the lookout for. But the work is extremely rewarding. Not only do we get to enjoy time in the beautiful Caribbean outdoors, visiting never seen-caves, enjoying the local flora and fauna, but also that sense of discovery of finding pristine, unaltered, fossil-rich deposits. Each little fossil is a small window, a slight glimpse to a past long gone.”

If each fossil is a window, then rich deposit at Cueva de los Nesofontes sheds a great deal of light and brings a breathe of fresh air to the myriad of small creatures that called Cuba their home so long ago.