Anthropogenic biases can be introduced at any point in a specimen’s life. The current study breaks down anthropogenic biases into five categories: field biases, preparation biases, curation and acquisition biases, publication biases, and digitization biases. Human decisions in the field can determine which specimens are collected for study and which are not. Preparation techniques can remove the matrix encasing a fossil, but they can also leave behind traces of their own. Differing levels of expertise by curators of certain fossils groups can lead to those groups being better labelled and organized than others, while differing research interests can lead to an uneven number of publications on different fossil groups. Finally, on the great digital research frontier – i.e. digitization platforms like the Paleobiology Database and iDigBio – information on fossils is only as good as the source (museum records in the case of iDigBio and user-input for the Palaeobiology Database). Additionally, digital platforms can fall victim to typos and need to be regularly updated to keep in line with the latest taxonomy. Specimens and collections can be used in ways other than how they were originally intended. Consequentially, it is important to recognize biases in these collections. 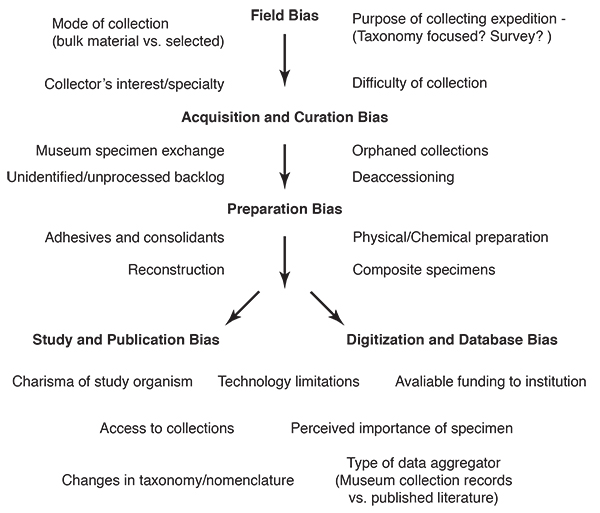 To examine the role of anthropogenic biases in natural history collections, the team at the University of Kansas used the Spence Shale Collection, housed at the University, as a case study. The Spence Shale is a Cambrian age site from Idaho which features a wide assortment of early hard and soft-bodied animal remains. Creatures such as trilobites and brachiopods are common. To understand how significant a role human-introduced biases have played in the collection, curation, and use of the collection, the researchers interviewed past collectors, curators, and others associated with the collection as well as looking for patterns in past publication.

First, the KU team reviewed the history of collection at the Spence Shale site. Through interviewing current and past collectors, the team of researchers found that rather than being a generalized sample of all fossil groups at the site, collecting proceeded according to what was easiest to collect (surface fossils) or most easily accessible. More complete fossils were also preferred over less complete ones, and common species were not collected once a good handful had already been retrieved.

Preparation bias also affected the Spence Shale collection. In this case, it was found that an older technique for splitting rock to reveal flat- (or mostly flat) bodied animals inside broke off thin and fragile spines used to identify some trilobite species. Fortunately, the museum kept the original rocks in which these trilobites were found, so these spines can theoretically be re-attached.

The KU team found that the history of publication of the Spence Shale gave the reader a distorted view of the animals present in the formation. Some animals, like soft-bodied arthropods, were published on far more frequently than others, like humble brachiopods. More study of a particular organismal group also tends to mean more species in that group are identified as individual species rather than nameless specimens in a broader group. Here the mismatch between the well-studied arthropods and the poorly studied brachiopods is particularly egregious. Despite representing only 2.06% of all specimens collected from the Spence Shale, soft-bodied arthropods account for 21% of named genera from the formation.

Finally, digitization efforts for the Spence Shale are plagued with outdated species lists and lists that include taxonomic “synonyms,” two different names that refer the same organism. Typographical errors also posed problems, such as one instance of the modern insect genus Trilobia being included in the list of Spence Shale taxa. 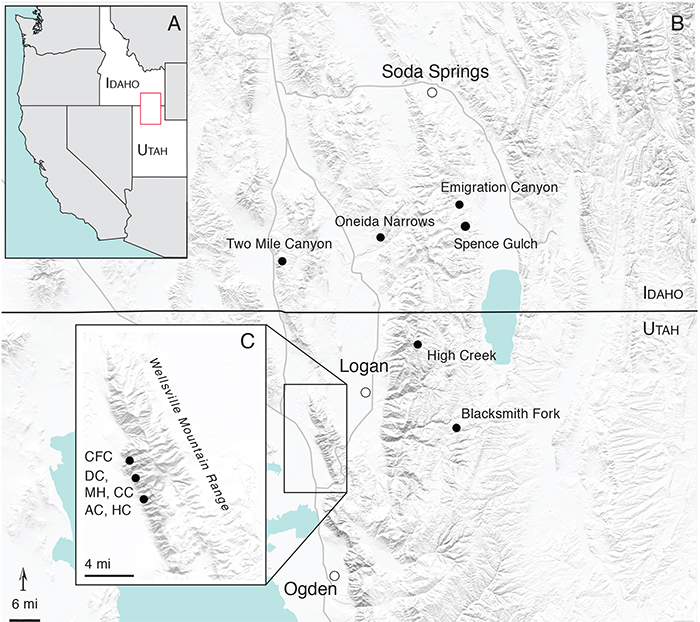 Figure 2. Location of the Spence Shale in southern-most Idaho.

While earlier studies focused on identifying taxa, new efforts to understand the ecology of the Spence Shale, be it the species diversity of the formation or food webs, rely on having an accurate picture of what the community living in the Spence Shale “actually looked like.” The current study by the KU team suggests that there is a great deal of distance in terms of diversity and abundance of species between the Spence Shale Collection and the Spence Shale community as it would have appeared in its time.

This discrepancy complicates efforts to understand the Spence Shale from an ecological perspective. In their publication, the KU team notes a recent study on the Burgess Shale, a similar age formation in Canada, that examines the diversity of that community. That study justified doing so based on the meticulous collection method employed at the Burgess Shale. The more targetted method of collecting at the different localities at the Spence Shale site, according to the KU team, would not hold up to similar scrutiny.

So what is a palaeoecologist to do? Fortunately, researchers are not without solutions, or at least strategies to mitigate human-introduced biases. The KU team writes that by “bulk sampling” i.e. collecting all or most available fossil material and associated matrix rather than selectively recovering complete or “interesting” (to relevant researchers at least) specimens, future researchers can minimize the impact of human-derived biases in their studies. Additionally, researchers and other people involved with the collection and research process can help minimize the significance of anthropogenic biases in our understanding of past life by using up-to-date preparation techniques and saving material with which the fossil was recovered.

On the digitization front, database managers can eliminate errors by reviewing their lists of taxa to ensure that they are using updated species and genus names and names that are not synonymous (two different names referring to the same organismal group). Researchers using databases can likewise “clean” their data to avoid errors, such as the apparent presence of a modern insect Trilobia in the Spence Shale instead of the more appropriate Trilobita. 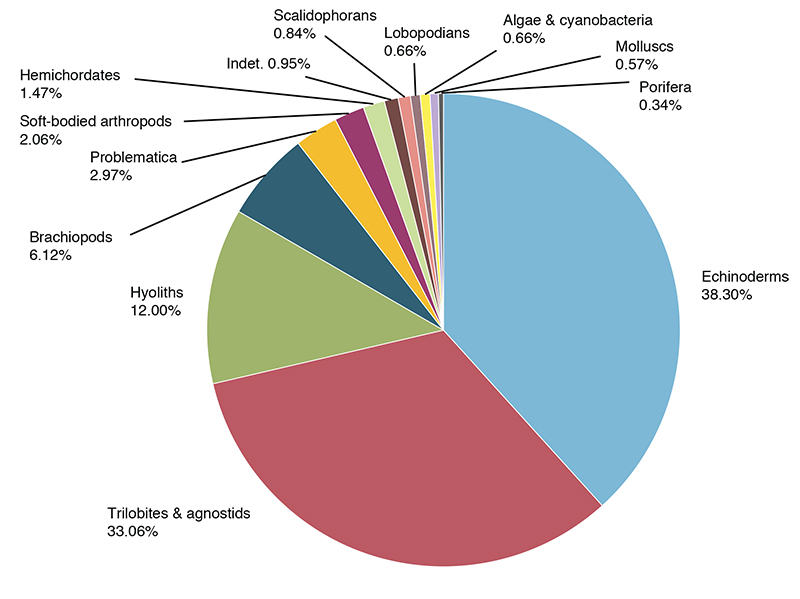 While taking these extra steps to avoid introducing bias into the research process is vitally important to being able to use a given collection with confidence for ecological or other studies, Anna Whitaker, one of the researchers on the study, suggests that it is also important for stakeholders in the collection-curation-research process to think more broadly and thoroughly about the implications of human biases. It is important to think about a specimen’s history of interaction with humans as not incidental to that specimen’s history, but integral to understanding that specimen in its own right. Whitaker explains, “During my Master’s program, my museums studies cohort had a wide range of backgrounds, mostly outside of natural history. When talking with them, I realized their fields focused on researching the people and surrounding history of objects, as much as the researching the object itself. Bringing that perspective to natural history collections means recognizing that these specimens have a dual role: as scientific data of the natural world, and as objects that exist in their present form as the result of numerous human choices.”

So next time you are walking through a museum gallery or a collections room if you get the chance, consider that there are two stories in front of you. One story tells of a long-gone prehistoric world. The other tells of a human history, how the object in front of you rested for potentially millions of years before emerging from its slumber and passing through the hands of collector, curator, and researcher - all with their own names, lives, and stories - and ended up here in front of you, the latest chapter in a saga that stretches through the ages.