And so we arrive at our original conundrum. How does one measure megalodon with only teeth? The answer has gone through a series of iterations over the years as different shark paleontologists have taken a bite out of the problem. Researchers have attempted to estimate the length of megalodon by comparing the length of modern sharks with the size of their teeth. Using teeth to estimate body size has shown promising results, but these estimates vary depending on where in the mouth the tooth originated. A recent paper published in Palaeontologia Electronica explores a new method for estimating the size of Otodus megalodon and other extinct sharks. More accurate size estimates of these ancient sharks will help future researchers better understand how they lived, hunted, and ultimately went extinct.

A Most Toothsome Fish 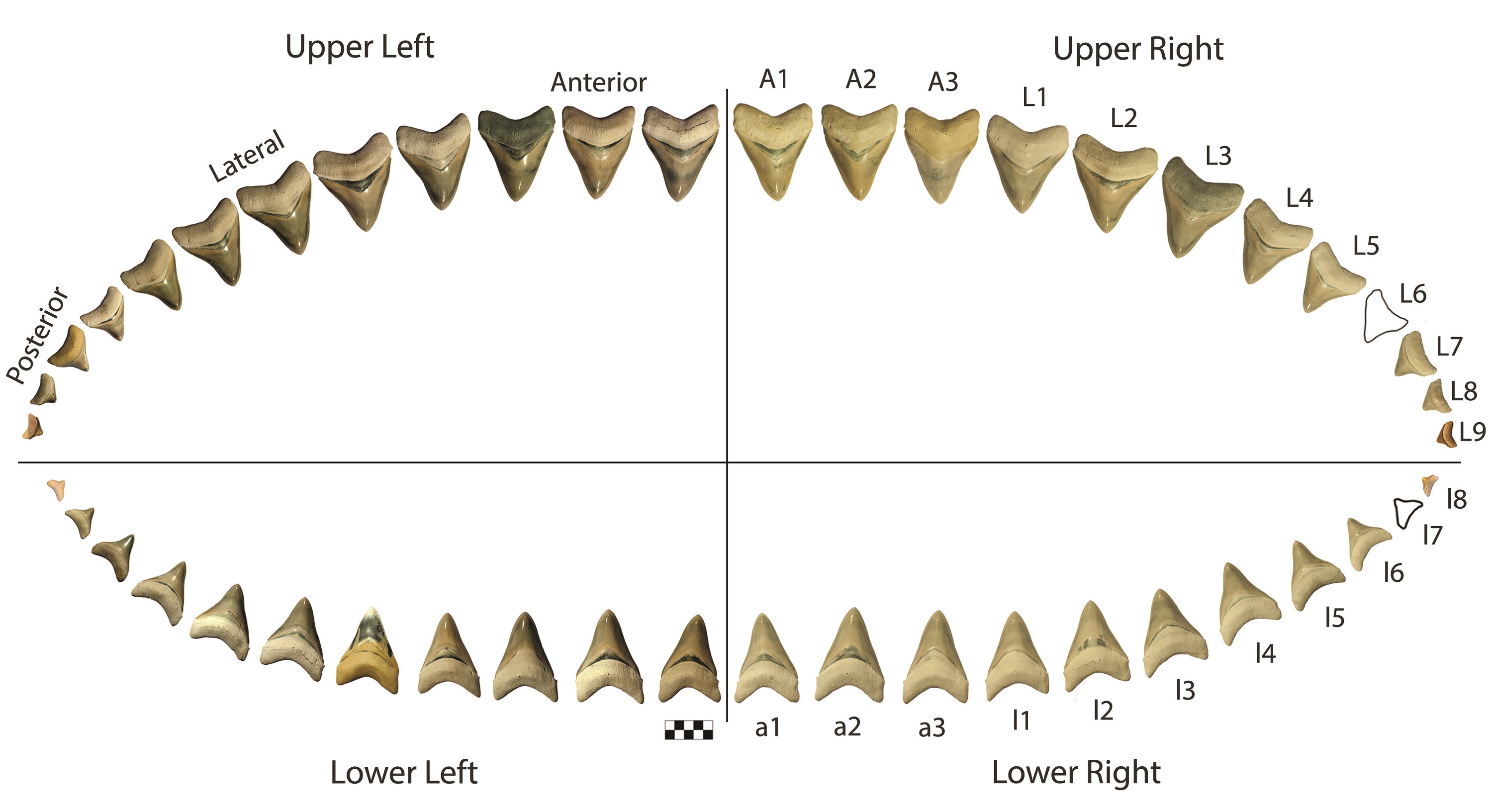 Figure 1. The most complete known associated dentition of Megalodon, with common terminology used to describe the dentition. These teeth all originated from one shark! Scale bar = 5 cm. Figure modified from Perez et al. (2021).

Using the crown width of the full shark dentition (or as much of the full set of teeth as possible), the current researchers estimated that megalodon measured a whopping 65 feet (20 meters) from nose to tail. That’s about 2.5 times as long as the animatronic shark used in the film Jaws and nearly half the length of an Olympic-sized swimming pool. Whichever comparison one uses, this is an animal that was truly massive.

So we’ve got a giant shark on our hands. Now what? Beyond the sense of awe one can derive from thinking about such an animal swimming through the ancient oceans or the joy we can get from watching them on the silver screen, why is it worth knowing exactly how big megalodon could grow? Animal body size, particularly in an animal as large as megalodon, can help answer a whole host of other questions about not only the organism in question, but also its environment. Dr. Victor Perez, one of the researchers on the study, explains, “Body size is a commonly used metric for analyzing trends in modern ecosystems and within the fossil record. Body size may relate to an organism's diet, locomotion, thermoregulation, development, environment, and more. In the case of Otodus megalodon, body size estimates have been used as evidence to infer nursery habitats in the fossil record, which has implications for a specific reproductive strategy. Further, megalodon's large size likely contributed to its success while preying upon marine mammals but may have also led to its extinction due to the large metabolic demand. Megalodon has also become a public paleontological icon, akin to Tyrannosaurus rex, so, it's important that scientific institutions provide an accurate depiction of this extinct organism.” 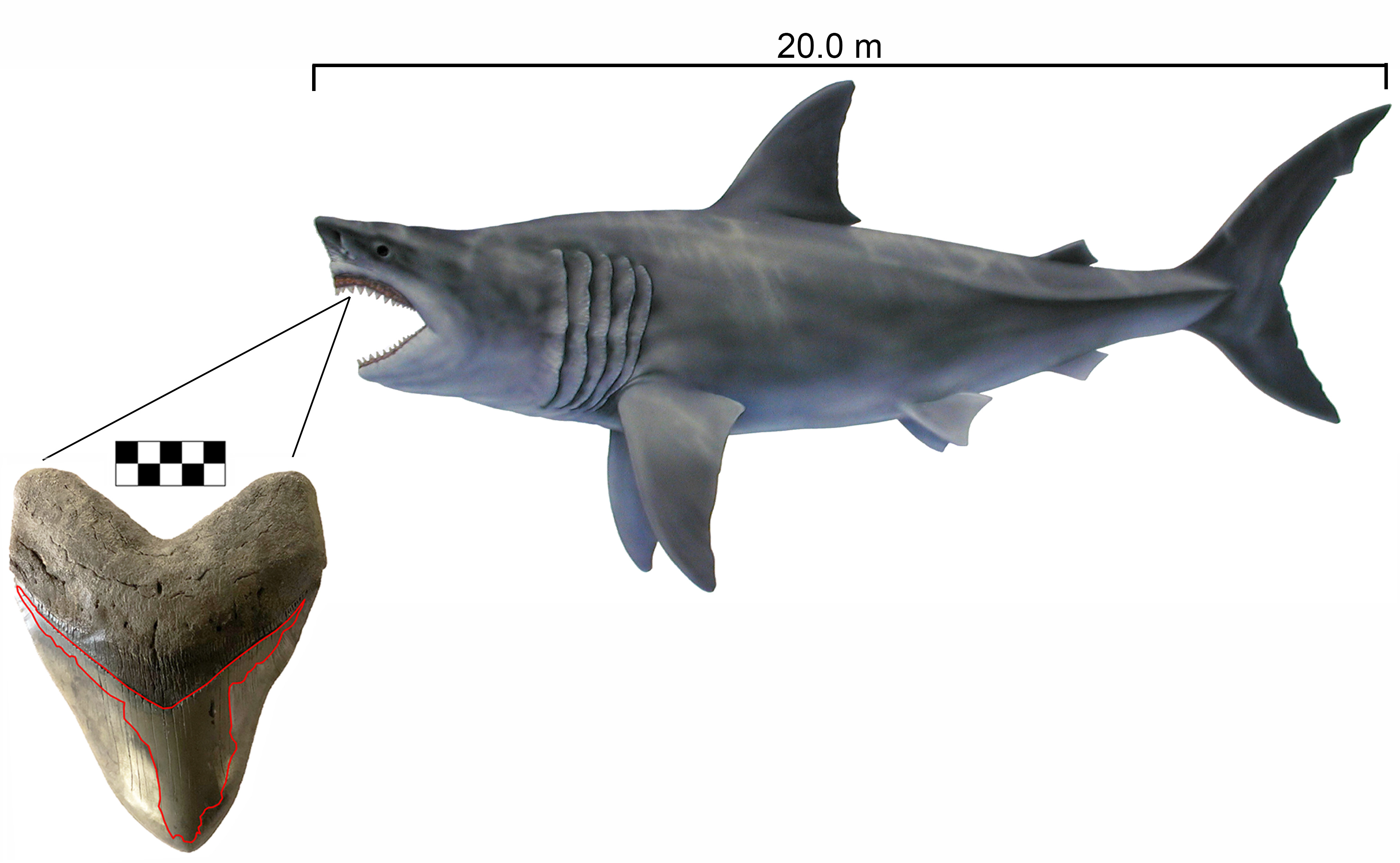 Figure 3. Maximum body length of Otodus megalodon, based on the largest known tooth. Note: the tooth enamel was repaired inside the red polygon. The slant height of the tooth is 7.25 inches (~184 mm). Scale bar = 5 cm. Otodus megalodon artwork by Tim Scheirer, with permission for use by the Calvert Marine Museum. Figure modified from Perez et al. (2021).

Dr. Perez and the other researchers on the study not only estimated the size of megalodon but also estimated sizes for other shark species, both living and extinct, using the same method. These sharks include Otodus megalodon, Otodus chubutensis, Carcharodon carcharias, Carcharodon hubbelli, and Carcharodon hastalis. According to Dr. Perez, these sharks’ sizes can be estimated using the same methodology due to the fact that they all represent the same or similar ecological niche, or role, in their respective time periods, i.e. large apex predators. Other shark sizes can be estimated, but the reliability of such predictions decrease with increasingly different dentition. That said, this new method for estimating shark size based on teeth opens new opportunities to investigate poorly explored areas of shark paleontology. “I would like to apply this method to older ancestors of Otodus megalodon to evaluate long-term body size trends,” says Dr. Perez.  “There is a general assumption that there was a long-term trend of increasing body size in the megatooth lineage; however, no study has quantitatively documented that trend. It would be very interesting to analyze both spatial and temporal trends in body size to better understand both the evolution and extinction of this lineage. I would also love to see others apply the same concept to other extinct lineages of sharks.”

Science is constantly changing, not in arbitrary jolts from left to right, but in a sustained and clarifying fashion. Each new discovery delivers us an additional imperfect piece of the whole that is our understanding of the natural world. In the case of megalodon, this new method of using whole dentitions rather than isolated teeth grants us a clearer and more reliable estimate of how big Otodus megalodon really was. Contained within that estimate are all of the downstream implications of what it might mean both for the structure of ancient ecosystems and for how our modern oceans came to be. Dr. Perez further elaborates, “Body size of megalodon has been debated for more than 100 years. The first methods were developed using isolated fossil teeth. Since then, we have found a number of associated fossil dentitions (aka a set of teeth from one individual), which were the basis of this new study. One day we may find an articulated skeleton that changes our understanding again.” Should researchers someday uncover such a skeleton, it will be an instance of the validity of a fish tale being answered by an actual fish tail.