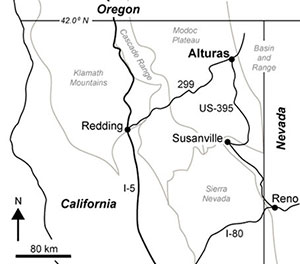 Charles Repenning was one of the foremost world experts on Arvicoline evolution and biostratigraphy. Based on early radiometric dates and magnetic polarity stratigraphy, Rep interpreted the first stratigraphic occurrence of Mimomys in the section at Alturas, California as the oldest occurrence in North America and therefore considered it very important for constraining the age of the Hemphillian - Blancan land mammal age boundary.

The first author (SRM) had the great pleasure of visiting the Alturas locality with Rep in the 1980s and was able to return many years later with other colleagues and new capabilities to improve on the age constraints for the Alturas section. Based on these new data, the first stratigraphic occurrence of Mimomys at Alturas is now interpreted to be younger than previously thought. The first occurrence of Mimomys in the U.S. is now interpreted to occur at Panaca, Nevada.