Gastralia are dermal ossifications localized in the ventral or ventroposterior abdominal wall of several extinct tetrapodan groups (see Claessens, 2004), as well as some extant reptiles, such as Sphenodon punctatum (e.g., Daiber, 1920-21; Byerly, 1925) and crocodiles (e.g., Gadow, 1882; Maurer, 1896; Romer, 1956). In dinosaurs, remains of a gastralial apparatus are reported from numerous theropod dinosaurs and an increasing number of non-sauropodan sauropodomorph dinosaurs. The gastralial apparatus of theropod dinosaurs is known from many findings with more or less complete and articulated material (e.g., Eudes-Deslongchamps, 1838; Osborn, 1906; Lambe, 1917; Gilmore, 1920; Barsbold, 1983; Chure and Madson, 1996; Norell and Makovicky, 1997; Claessens, 2004; O'Connor, 2007). The theropodan gastralial apparatus consists of a variable number of metameric gastralial rows; each of these comprises four gastralia: two medial and two lateral gastralia. Exceptions are the fused and chevron-shaped medial gastralium of the first and the last gastralial row reported from some theropod dinosaurs (Claessens, 2004). The gastralial apparatus of non-sauropodan sauropodomorph dinosaurs is mainly known from isolated and fragmentary material (e.g., Huene, 1907-08; Cooper, 1981; Knoll, 2010; Sertich and Loewen, 2010; Yates et al., 2010). However, an almost complete and articulated gastralial apparatus of Plateosaurus gracilis was described by Huene (1915), which received, unfortunately, little attention. The gastralial apparatus was lost on the lineage to sauropod dinosaurs (see Claessens, 2004), although remains of sauropodan gastralia have been repeatedly reported (Redman and Filla, 1994; He et al., 1998; Sereno et al., 1999). The most recent report on sauropodan gastralia was provided by Tschopp and Mateus (2013). When describing the remains of the chest region of Diplodocidae from the Late Jurassic Howe Quarry (Wyoming, USA), Tschopp and Mateus (2013) identified some of the material as gastralia. The assignment of this material to gastralia, however, is uncertain and solely based on a proposed articulation of the remains. Since these remains show morphological characters which clearly allow for an assignment to sauropodan sternalia (in the absence of morphological characters allowing for definitive assignment to gastralia) the remains are considered here as sauropodan sternalia. Findings on the gross anatomy and function of the sauropodomorph gastralial apparatus are mainly inferred from comparison with theropod dinosaurs (Claessens, 2004).

Assumptions on the functional morphology of the gastralial apparatus in saurischian dinosaurs as in other extinct and extant tetrapods are mainly based on its location on the ventral aspect of the trunk and on its association with m. rectus abdominis and the activity of this muscle in extant tetrapods. Basically two different functions are discussed for the gastralial apparatus of saurischian dinosaurs: 1) protection and support of the viscera (Romer, 1956; Hildebrand, 1995; Holtz and Brett-Surman, 1997) and 2) respiration (e.g., Perry, 1983; Carrier and Famer, 2000; Claessens, 2004, 2009). In addition to the discussion on the function of the gastralial apparatus in saurischian dinosaurs, Robinson (1975, 1977) presented an interesting idea on the function of the gastralial apparatus in plesiosaurs. According to Robinson (1975, 1977), the ventral trunk of plesiosaurs including the gastralial apparatus and its associated soft-tissues were adapted to stresses that are exerted on the plesiosaurian trunk during aquatic locomotion. A fresh look at the activity pattern of the abdominal hypaxial muscles including m. rectus abdominis in extant amphibians and reptiles has revealed that this muscle group is not only part of the respiratory system, but is also part of the locomotory system (e.g., Carrier, 1990; O'Reilly et al., 2000; Bennett et al., 2001). 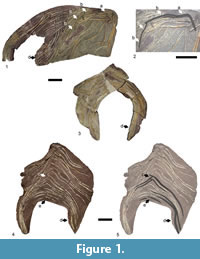 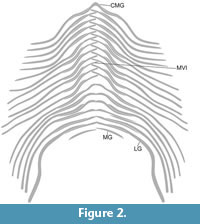 General Notes on the Gastralial Apparatus of Non-sauropodan Sauropodomorph Dinosaurs 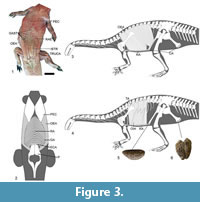 The hypaxial abdominal muscles including m. rectus abdominis are of dual function: respiration and locomotion. In amphibians and reptiles, the abdominal hypaxial muscles allow for lateral bending of the trunk and stabilization of the trunk against long-axis torsion during walking (e.g., Carrier, 1990, 1993; Bennett et al., 2001). During walking, the trunk is supported by two diagonally opposing limbs. The ground reaction forces directed through the supporting limbs result in the rotation of the girdles and therewith in a twist of the long-axis of the trunk (Gray, 1968; Carrier, 1990; Bennett et al., 2001). In order to allow for trunk stabilization, muscle forces are required to counteract those torsional moments. It has been found that the abdominal hypaxial muscles are well suited to accomplish this task (Carrier, 1990, 1993; Bennett et al., 2001). The activity of m. obliquus internus abdominis and m. transversus abdominis on the extending side of the trunk is associated with forelimb support, and m. obliquus externus abdominis is active on the flexing side of the trunk and associated with hind limb support (Carrier, 1990; Bennett et al., 2001). M. rectus abdominis is associated with lateral bending of trunk (Carrier, 1990). The work of Carrier (1990, 1993) and Bennett et al. (2001) refer to amphibians and lizards and therewith tetrapods with a sprawling limb posture and a quadrupedal body posture. For tetrapods with an erect limb posture (e.g., Gray, 1968; Fife et al., 2001; Deban and Carrier, 2002) and bipedal body posture (e.g., Waters and Morris, 1972; Borghuis et al., 2008) comparative findings have been obtained. This suggests that the abdominal hypaxial muscles are of dual function in Plateosaurus and other extinct archosaurs.

It is commonly accepted that a bone is shaped by the mechanical loads imposed on it and optimized in terms that minimum bone mass with maximum bone strength (e.g., Rubin and Lanyon, 1987; Christen et al., 2012). At both the developmental and evolutionary scale, changes in the mechanical loads are correlated with changes in its shape (e.g., Moss and Salentijn, 1969; Barak et al., 2011). A bone or bone complex, however, can be adapted to more than one function (Bock and Wahlert, 1969) and in such cases its resulting shape has to be regarded as a compromise. Each function of a bone or a bone complex is subject to selective forces (Bock and Wahlert, 1969; Currey, 2012). If one wants to analyze the cause and/or the change in shape, it is necessary to identify all the functions associated with the bone or bone complex; then the function or functions responsible for the change in shape can be detected. The relationship between function and shape, however, is very complex and fundamental aspects of the function – shape relationship of most anatomical structures – is not yet fully understood. The gastralial apparatus of extant tetrapods has rarely been subjected to functional morphological studies (e.g., Claessens, 2009). In extant tetrapods a gastralial apparatus is only present in Sphenodon and crocodiles. Further functional morphological studies have the potential to provide new insights into the function of the gastralial apparatus, supporting or confuting existing hypotheses. Such studies might show whether those findings can be applied to extinct tetrapods, such as sauropod dinosaurs, which differ from Sphenodon and crocodiles regarding body and limb posture, trunk stabilization, and ventilatory mechanism.

The authors thank R. Schoch for access to material in his care, H. Preuschoft, N. Sverdlova, and S. Perry for discussions on the functional morphology of gastralia and archosaur physiology, E. Tschopp for discussions on potential gastralial remains in sauropod dinosaurs, C. Distler and S. Klenner for assistance in dissecting extant archosaur, L. Claessens, D. Pol, the editor of Palaeontologia Electronica J. Louys, and two anonymous reviewers for helpful comments on an earlier draft of this manuscript. The Deutsche Forschungsgemeinschaft (DFG) grant FE 1115/1-1 supported this research.

Baumel, J.J., Wilson, J.A., and Bergren, D.R. 1990. The ventilatory movements of the avian pelvis and tail: function of the muscles of the tail region of the pigeon (Columba livia). Journal of Experimental Biology, 151:263–277.

Carrier, D.R. 1990. Activity of the hypaxial muscles during walking in the lizard Iguana iguana.Journal of Experimental Biology, 152:453–470.

Carrier, D.R. 1993. Action of the hypaxial muscles during walking and swimming in the salamander Dicamptodon ensatus. Journal of Experimental Biology, 180:75–83.

Chure, D.J. and Madsen, J.H. 1996. On the presence of furculae in some non-maniraptorian theropods. Journal of Vertebrate Paleontology, 16:573–577.

Claessens, L.P.A.M. 2009. A cineradiographic study of lung ventilation in Alligator mississippiensis.Journal of Experimental Zoology Part B: Molecular and Developmental Evolution, 311A:563–585.

Cooper, M. 1981. The prosauropod dinosaur Massospondylus carinatus Owen from Zimbabwe: its biology, mode of life and phylogenetic significance. Occasional Papers of the National Museums and Monuments of Rhodesia, Series B, Natural Sciences, 6:690–840.

Romer, A.S.1923. Crocodilian pelvic muscles and their avian and reptilian homologues. Bulletin of the American Museum of Natural History, 48:533–552.

Rubin, C.T. and Lanyon, L.E. 1987. Osteoregulatory nature of mechanical stimuli: function as a determinant for adaptive remodeling in bone. Journal of Orthopaedic Research, 5:300–310.

Schoch, R.R. 2011. Tracing SEEMANN's dinosaur excavation in the Upper Triassic of Trossingen: his field notes and the present status of the material. Palaeodiversity, 4:245–282.

Yates, A.M., Bonnan, M.F., Neveling, J., Chinsamy, A., and Blackbeard, M.G. 2010. A new transitional sauropodomorph dinosaur from the Early Jurassic of South Africa and the evolution of sauropod feeding and quadrupedalism. Proceedings of the Royal Society of London Series B-Biological Sciences, 277:787–794.