Cephalopods are a class of mollusks that include highly intelligent octopuses, scary squid, camouflaging cuttlefish, and the chambered nautilus (Family: Mollusca, Class: Cephalopoda). The nautilus, Nautilus pompilius, is among the last living cephalopods with an external shell which is full of chambers. Throughout the Paleozoic Era (544-245 million years ago), all cephalopods had an external shell that came in a variety of shapes and sizes.

A challenge for cephalopods with an external shell is achieving neutral buoyancy. This is the goal SCUBA divers also aim to achieve, to become weightless underwater and able to float in place without sinking or rising. For a cephalopod, this allows them to swim more efficiently and travel farther out into the ocean from shore.

But how do cephalopods achieve neutral buoyancy you ask? SCUBA divers do so by adding or releasing are from their Buoyancy Control Device (BCD), aka the bulky vest they wear. Turns out cephalopods have evolved to do this on their own via osmosis, where molecules move from areas of high to low concentrations. David Peterman, author of a recent PE article, is particularly interested in how early cephalopods diversified after evolving this ability.

Peterman says “Cephalopods with an external shell actively transport ions from the water in each chamber to a vein-like organ called the siphuncle that connects all chambers. This creates an osmotic gradient that passively pulls water across the siphuncle membrane into the blood.”

This process of osmosis changes the amounts of water or gas inside the shell chambers. More gas makes it rise and more water makes it sink, therefore fluctuating buoyancy.

The evolution of this process is particularly interesting to Peterman because “the earliest cephalopods were not able to produce buoyancy, so they were unable to swim over anoxic parts of the ocean or overcome other constraints on their dispersal”. 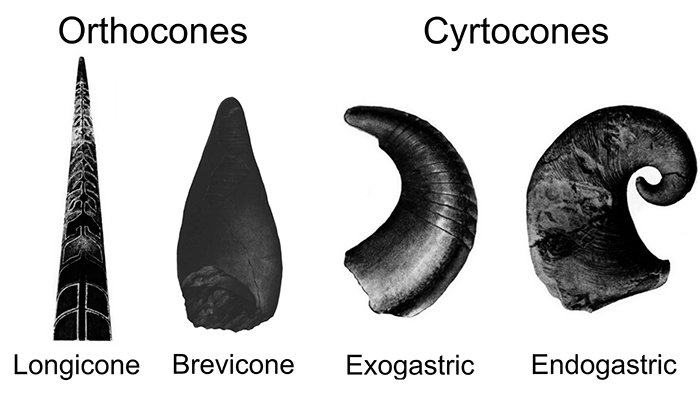 Depiction of general terms used within this study. Orthocones refer to straight shelled cephalopods, whereas cyrtocones are slightly curved.

Fossil cephalopods reflect this change as well. Earlier in the Cambrian cephalopods had uncoiled external shells and larger soft body proportions, which made it more difficult to swim and modify buoyancy. Gradually over time, the conditions for buoyancy improved, and shells became more coiled, improving mobility. These modifications stimulated their diversification and dispersal across the ocean. An early cephalopod with a long straight cone-shaped shell known as endocerids became the largest swimming organism in the Ordovician, reaching lengths of six meters (20 ft)!

Peterman and the other researchers on the project are particularly interested in how these ancient critters diversified in terms of their shell morphology and the physical hydrostatic properties acting on them during life.

To look at this more closely they have been using 3D models to examine these physical properties for ancient shell shapes. Although models are always improving, one major obstacle is relying on fossils which may be poorly preserved. 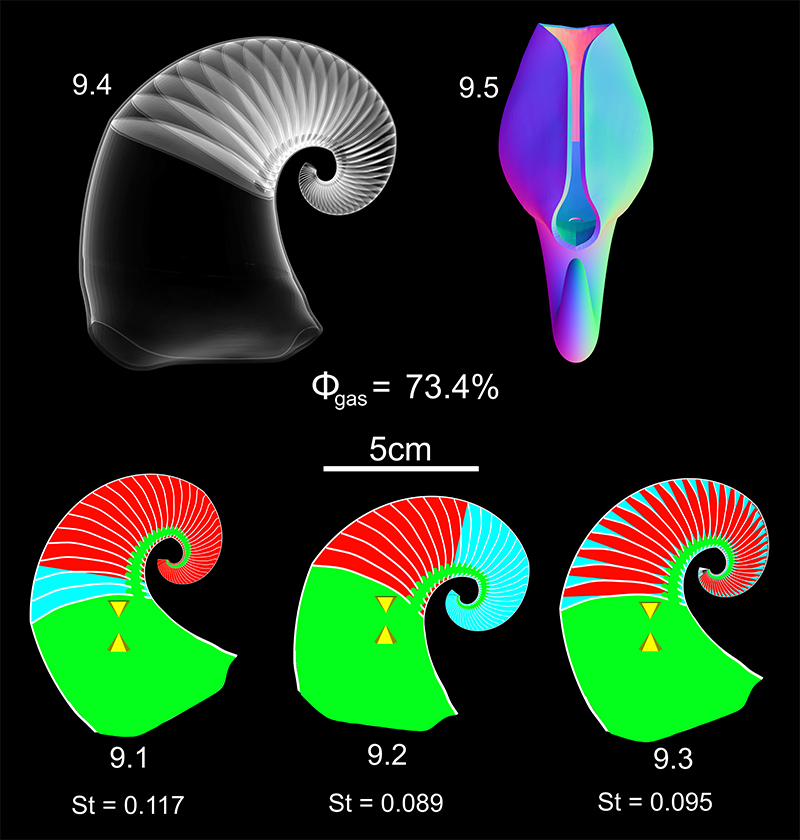 “These models assume that shell thickness, and certain proportions do not change as organisms develop over time” says Peterman. “But I am currently developing a new modeling technique that does not require these assumptions.”

Technology is rapidly improving, which means models such as these will only get more precise for future research.

“These methods can be used for plenty of other studies. Photogrammetry, the science of making precise measurements from photographs, has been increasingly used by paleontologists to create 3D models. Both of these methods, photogrammetry and our hydrostatic model, can be merged together to improve the accuracy of 3D models and hydrostatic calculations.” Peterman says.

To get a closer look at these modelling techniques, check out the original article here!