Ptyctodonts are an extinct group of armoured fishes (placoderms) which are common in Middle to Late Devonian aged rocks . Unlike other armoured placoderms, ptyctodonts had reduced body armour, large eyes and a long whip like tail. Unfortunately, the group is known mostly from fossil tooth plates. Body fossil are rare and articulated specimens showing three-dimensional preservation are even rarer. Recently a new genus and species of ptyctodont was described in Palaeontologia Electronica by Kate Trinajstic, John A. Long, Alexander O. Ivanov, and Elga Mark-Kurik. Although occurring as isolated plates, this fossil showed 3D preservation allowing the fish to be accurately reconstructed.

Reconstructing a fish with 3D preservation

Meeksiella pskovensis, the new ptyctodont, is describes from Baltic region deposits from Russia and Estonia which are dated to approximately 370 million years old (Late Devonian in age). Several specimens were originally attributed to the genus Chelyophorus. The fossil’s incredible 3D preservation allowed Professor Trinajstic and her team to reconstruct the dermal armour of Meeksiella. But 3D preservation wasn’t the only thing that benefited the reconstruction of Meeksiella pskovensis. Professor Trinajstic explains:

“Meeksiella pskovensis not only had 3D preservation, but the plates were able to be removed from the rock matrix. This allows the fish to be rebuilt, just like a model. The plates were not crushed or distorted so we were able to rebuild the dermal armour.”

This also allowed the team to see all of the surfaces of the dermal plates and provided internal and external views of the plates. “Having the articulate bones of the skull roof allowed us to do a CT scan which gave us some data on the internal structure of the bones,” says Professor Trinajstic. Many other ptyctodont fossil exhibit 2D preservation which is far from ideal. “With 2D preservation, usually only one face of the dermal plate can be seen which means that we loose a lot of morphological data,” Professor Trinajstic explains. 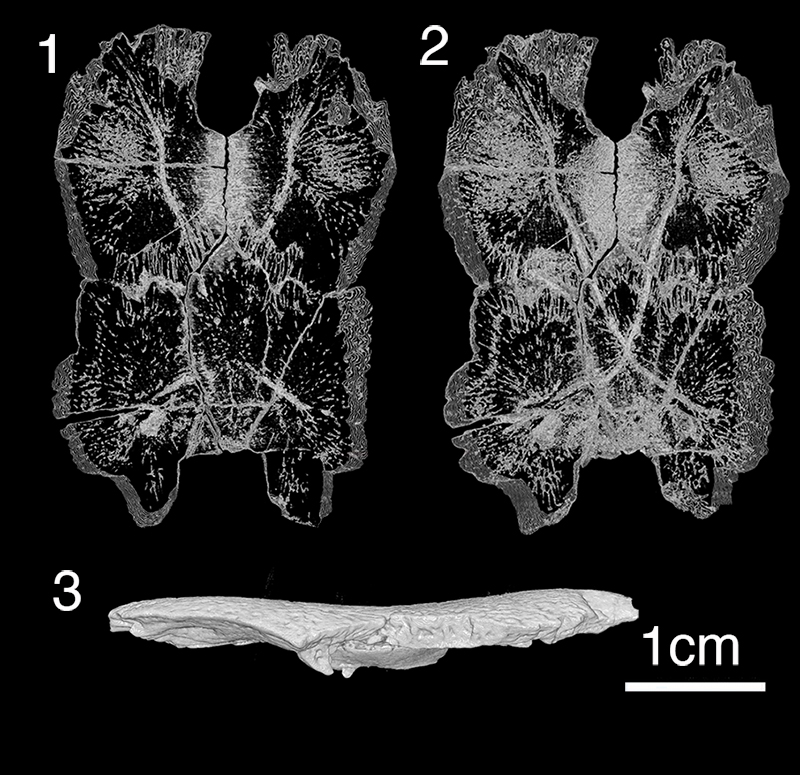 Ptyctodont tooth plates are found world-wide meaning that they had a global distribution. Interestingly, Professor Trinajstic’s research demonstrates that Meeksiella pskovensis, found in the Baltic region, shared a close phylogenetic relationship not only with species from Europe but also species from the early Frasnian Gogo Formation in Western Australia (Austroptyctodus and Campbellodus). Professor Trinajstic points out that this makes sense:

“Our cladogram shows a close relationship between Meeksiella and the Western Australian specimens. There were warm water currents that circulated around the shallow water shelf of the coast of the Baltic and north Gondwana and so there was some faunal connections across these areas.” 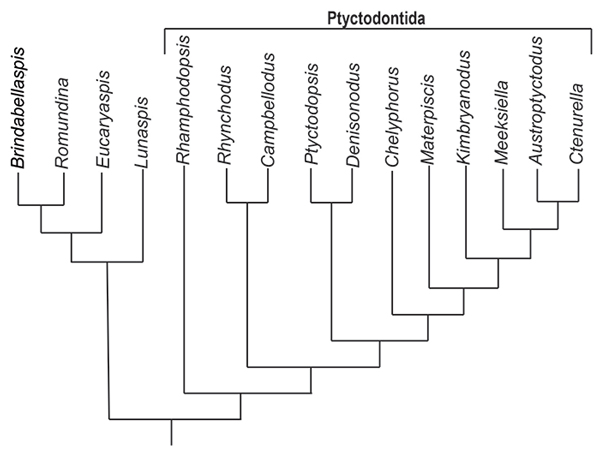 Cladogram showing the hypothesis of relationship amongst the ptyctodonts (Figure 9 of Trinajstic et al. 2019).

The few well preserved body fossils may lead some to believe that ptyctodonts were uncommon. This is not the case. “The large number of isolate teeth found from ptyctodonts indicates that they were much more numerous and diverse than the low number of body fossils that have been recovered indicates,” says Professor Trinajstic.

Based on the similarity of Meeksiella pskovensis to other ptyctodonts we can draw some conclusions about the ecology of this armoured fish. “Meeksiella pskovensis looks similar in body form to most ptyctodonts,” says Professor Trinajstic, “they were small fishes, the large eyes and shape of the tooth plates suggest that this fish was a predator, eating small shelled animals.” As Professor Trinajstic explains there may also be a reason for the reduced body armour iconic to Ptyctodonts:

“Ptyctodonts have a reduced body armour, a deep body and a whip like tail. The reduction in body armour occurs across a number of linages of placoderms and is thought to be related to freeing up the body to increase swimming ability.” 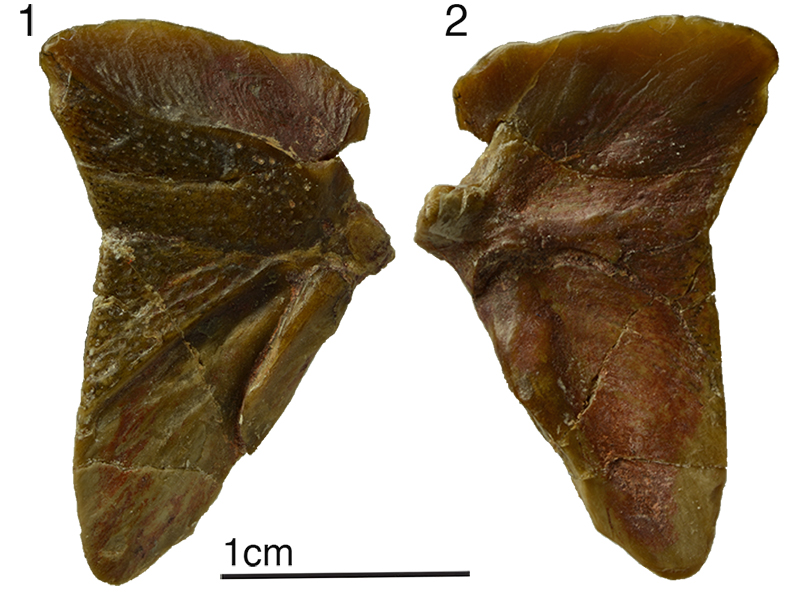 As Professor Trinajstic says “There are very few ptyctodonts known from complete specimens and this discovery provides important information of the diversity and radiation of these early jawed fish.” Thanks to the research from Professor Trinajstic and her team, and incredible preservation of Meeksiella pskovensis, we now know a little bit more about the an extinct species and the evolution of early  jawed fishes.