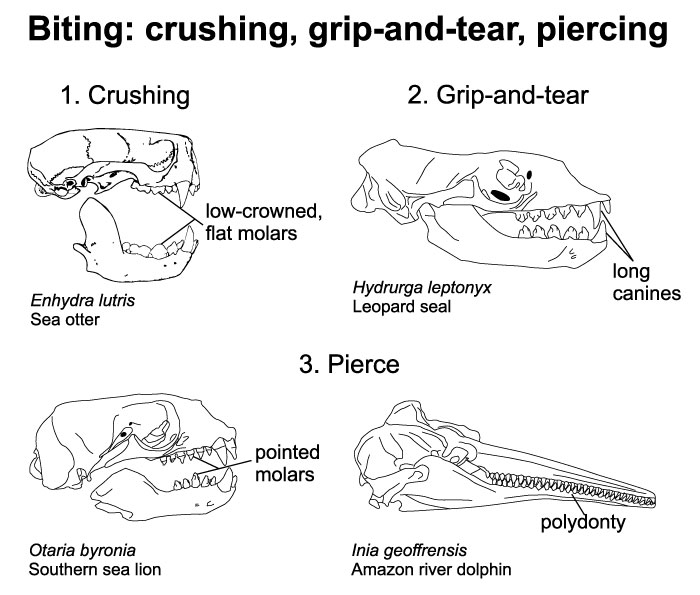 Marine mammals such as whales, seals, and dolphins weren’t snacking on the same exact prey for the entirety of their existence. In fact, many of these animals went through major shifts in their feeding strategy. One of the best examples is baleen whales, or mysticetes. These whales develop teeth initially, but the teeth are replaced with baleen before birth. Baleen consists of two rows of numerous hair-like plates that hang from the roof of their mouth, and acts as an efficient filter for consuming tiny prey like krill and small fish. However, fossil evidence shows that over 33 million years ago mysticetes spent their entire lives with teeth instead, and they later evolved baleen as an adaptation to their modern bulk filter feeding strategy.

Berta and Lanzetti used a method called ancestral state reconstruction to trace how and when these various transitions happened, specifically for whales and pinnipeds (seals, sea lions, and walruses). The resulting diagrams order taxa based on their evolutionary lineage, and assign colors to show the evolution of specific traits, allowing us to see where certain transitions occurred along the tree. For example, the tree of mysticetes shows a step-by-step transition from possessing teeth only (a predominate biting/crushing feeding strategy) to an intermediate stage that involved teeth and baleen (filter/ suction feeding) to toothless baleen whales we know today (bulk filter feeding strategy). Prey specialization on both fish and zooplankton seen in modern mysticetes evolved early in their evolutionary history. 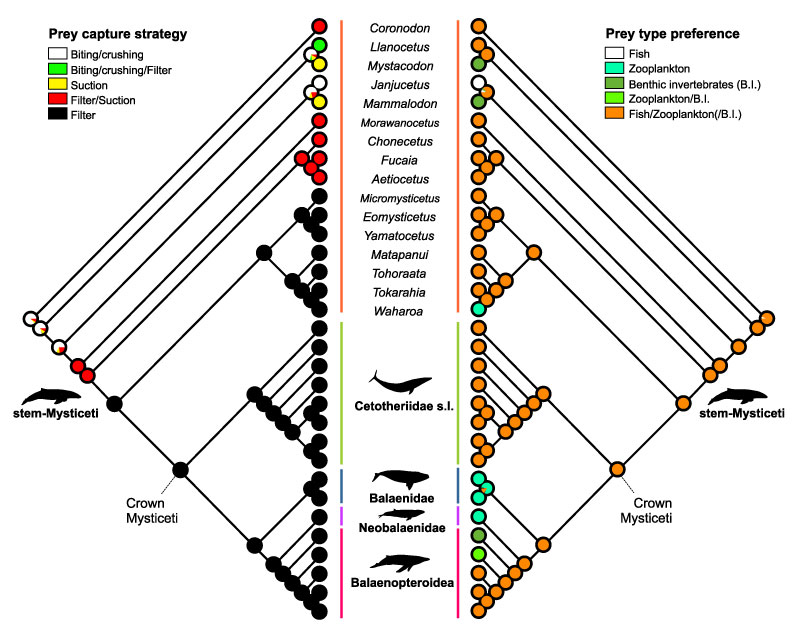 An Ancestral State Reconstruction for mysticete (baleen whale) feeding strategy (left) and diet (right). The top of the diagram represents the oldest taxa while the bottom represents whales living today. Nodes on the far left and right are expected common ancestors of these known taxa. The study also created reconstructions for toothed whales and pinnipeds.

“Evolutionary changes often occur in response to changing resources, such as food or territory,” Dr. Berta explained. Drivers may be biotic (biological), such as competition between groups of animals, or environmental, such as through climate or sea level changes. For baleen whales, it was likely a combination of both. “Compared to hunting single prey items like [toothed whales], bulk filter feeding allowed baleen whales to take advantage of short but regular bursts of an abundant food supply with a greater biomass and energy that is important given their large body sizes,” Dr. Berta said. This clever strategy prevents competition with other predators while following the availability of prey. According to Dr. Berta the switch to baleen was likely driven by changes in oceanic circulation patterns as well as food production and availability.

By studying how these changes happened in the past, we can better predict how current environmental impacts will shape the future of marine mammals. Today marine mammals are increasingly threatened by human impacts such as overfishing, habitat degradation, and anthropogenic climate change.

“This historical framework provides a valuable context for predicting factors that will determine the future vulnerability of marine mammals to extinction,” Dr. Berta said. “Understanding how drivers of past diversity, both biotic and environmental, continue to operate today helps shape our efforts to conserve and manage these remarkable mammals of the sea.”