Picture a face-off between a giant shark and small whale in the Miocene oceans 15 million years ago and you may think you know the ending. But fossil remains found in the Calvert Cliffs, Maryland, USA, reveal a different story – one of tenacity and survival.

The extinct shark megalodon was a looming macro-predator in the diverse marine mammal landscape of the time. A chance encounter between the shark and a small whale approximately 4m long is revealed in the discovery of two traumatically-damaged vertebrae by Mike Ellwood; one of these shows a major shear-compression fracture assumed to result from an ambush-impact and mighty bite of megalodon. The agonising attack would have forcefully bent the whale’s backbone into a tight curve, resulting in the crushing of one of the vertebrae. 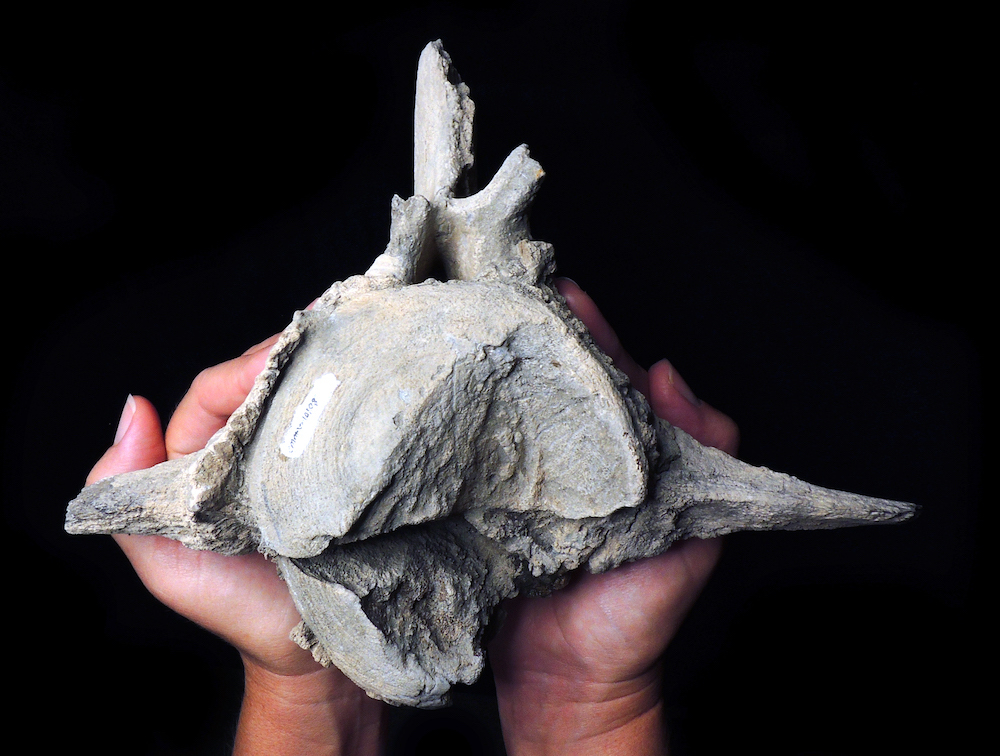 One of two whale vertebrae found in the Calvert Cliffs, with the bottom displaying extensive trauma that occurred during life, not fossilisation. Hands for scale.

The unfortunate whale did however survive this painful injury, with new bone growth observed in CT-scans showing an attempt at healing, though sadly not for long. Researchers at Calvert Marine Museum, Maryland, and the New York Institute of Technology's College of Osteopathic Medicine believe its suffering to have lasted 6-8 weeks before the whale’s tragic fate was resigned to rock and history.

Megalodon is assumed to be the culprit of this ultimately deadly act due to the discovery of an Otodus megalodon tooth touching one of the vertebrae (though not embedded within it) and the tip being snapped off in a manor known to occur when teeth strike bone. 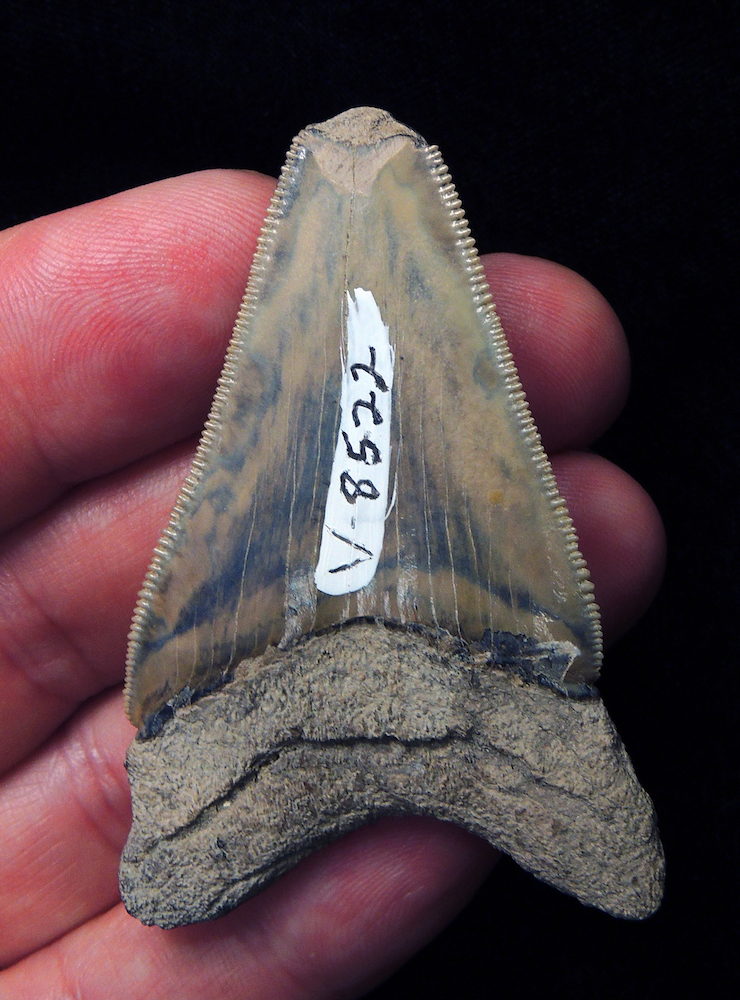 The Otodus megalodon tooth found touching one of the whale vertebrae, displaying serrations and a broken tip - a spall fracture caused by a tooth striking bone with force. Hand for scale.

Though their association could be due to coincidence or scavenging, the fact that the two fossils are touching suggests it may have been embedded within the whale’s skin after the aggressive bite. The tooth’s size implies a megalodon 6-7 m long, potentially indicating a juvenile. It is worthwhile noting the presence of smaller macro-predators Paratodus benedenii and Carcharodon carcharias as possible villains in this story too.

Interestingly, this predator-prey relationship is not the only possible explanation for these sheared vertebrae. Researchers Dr Stephen Godfrey and Dr Brian Beatty note that specific toxic algal blooms, caused by Pseudo-nitzchia, can lead to domoic acid poisoning in living whales, resulting in seizures. Krill, a vital food source for whales, concentrate this acid in the food chain. Seizures have been known to cause vertebral fractures in humans so it is plausible that a similar scenario exists in other mammalian lineages, though trauma of this magnitude has not been observed previously.

However, Godfrey suggests that this being the cause of such trauma is unlikely: “Although toxic algal blooms continue to kill marine mammals, we don’t yet have evidence that these poisonings result in shear-compression fractures or other osteological (bone) traumas like those seen in these fossils. That is the reason why we can’t say for certain that it was toxic shock resulting in spasms/convulsions that killed the Miocene whale. In addition to which, if it was poisoning from toxic algae causing spasms that resulted in the traumatic bone damage to the vertebrae, the whale first had to survive that poisoning to then begin to heal the badly damaged vertebrae. If the damaged vertebrae came about as a result of an encounter with a megalodon, clearly in spite of its macropredatory reputation, it was not always successful at killing its prey.” 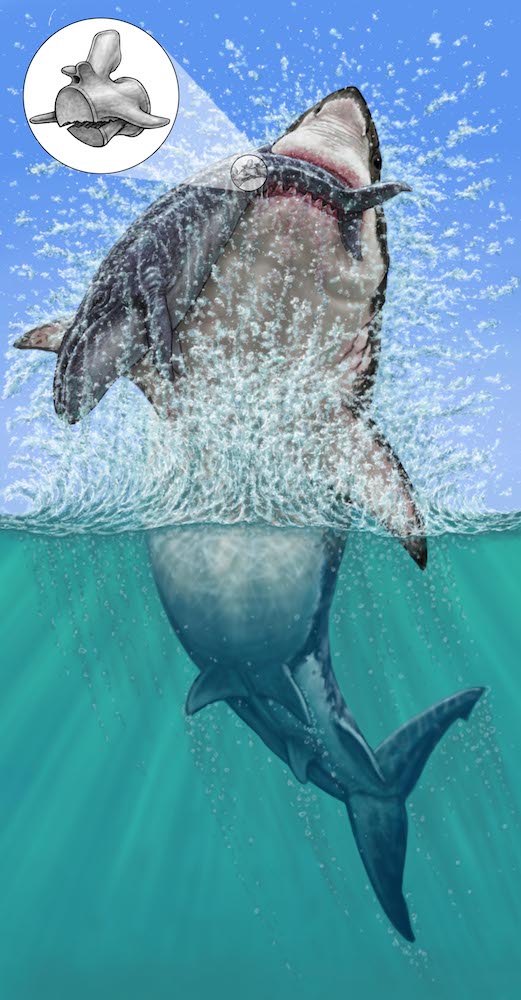 Visual representation of Otodus megalodon’s predatory attack on a small whale, with possible origin of the crushed vertebra. Art by Clarence (Shoe) Schumaker, image courtesy of the Calvert Marine Museum.

Alarmingly, the trauma seen in these fossil vertebrae is not resigned to geological history. Blunt force injuries from boats have been recorded in whale brains and vertebrae, with Godfrey offering a dire warning for their survival if current practices go unchecked: “Although extant whales won the evolutionary arms race with megalodon (they are alive and megalodon are not) it is difficult to imagine a scenario in which they could survive encounters with targeted hunting technology and disrespectful shipping practices. Fortunately, there exist checks and balances on some of these, but cetacean survival is not guaranteed given current practices.”

Nevertheless, a story of survival millions of years ago ultimately shows the resilience of life on earth. “Modern organisms (both plants and animals) of all kinds sometimes survive traumatic events, it’s one of the wonderful aspects of the resilience of life. Most organisms try to make the best of bad situations and this should be inspirational for us. Those that survive wear the scars of those encounters for the rest of their lives,” Godfrey acknowledges.

“Every fossil tells a story and some tell more than one. I am exceedingly blessed to be able to tell those stories by very carefully studying fossils and extracting as much information from the fossil as is possible given our present state of knowledge and technology. I expect that our ability to tell the stories hidden away in fossils will improve immeasurably into the future.”

To discover more about this research, read the full publication here.