Dinosaurs: how their family history tells the story of evolution 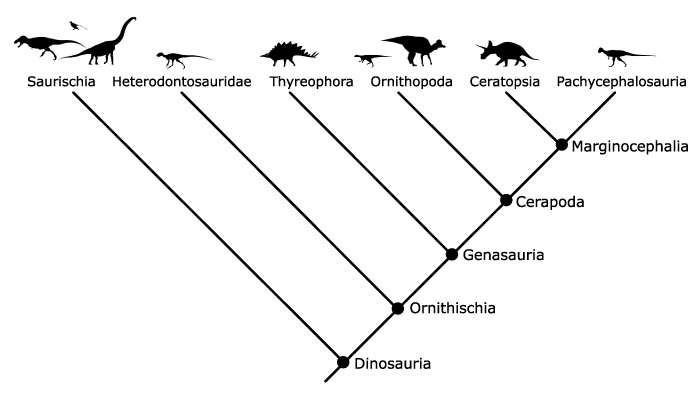 Dinosaurs are one of the most widely studied extinct organisms, with their incredible diversity capturing the imaginations of generations of enthusiasts and scientists. One of these diversity traits is the evolution from bipedality (two limbs for walking) to quadrupedality (four limbs), with new research identifying when this important change happened. This shift occurred at least four times within dinosaurs, but probably the least understood of these is within iguanodontians.

Iguanodontia are a type of herbivorous dinosaur that lived from the Late Jurassic through to Late Cretaceous (163.5 – 66 million years ago) and were geographically widespread across the planet.

Just like any other animal, dinosaurs have distinct taxonomy that can be placed into lineages so that we may see the ‘family history’, what palaeontologists term phylogeny. “This is important as the first step in understanding the evolution of a group of organisms is sorting out how they are related to each other,” Dr Karen Poole, of New York Institute of Technology College of Osteopathic Medicine at Arkansas State University, notes. “Once we have a family tree, we can start to ask questions about which features changed over time and when, or how a particular lineage got to a specific geographical area.” 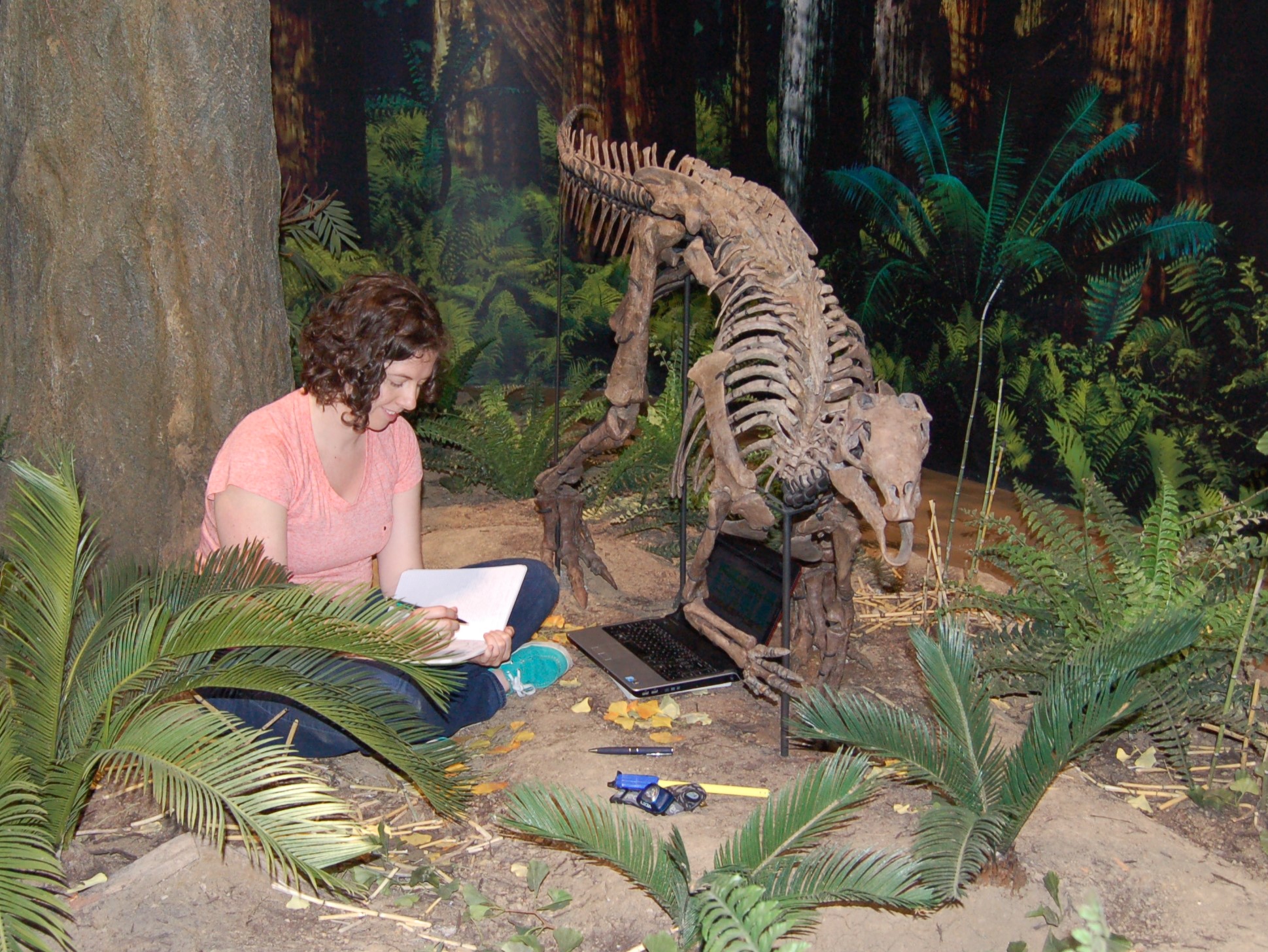 Dr Poole studying a mounted skeleton of Uteodon at the Carnegie Museum of Natural History, Pittsburgh.

In the case of dinosaurs specifically, Poole states why it is so important that we consider the taxonomy of these ancient organisms. “It’s incredibly important work because it defines how we view these creatures, and it affects almost every other question we can ask in palaeontology, such as: ‘How many species were in this environment and how did that change over time?’ That depends on how the specimens are sorted and assigned into species. ‘Was there sexual dimorphism (sexes of the same species with different physical characteristics) in this group?’ That depends on whether two similar but somewhat distinct morphs are different species, or males and females of one species. ‘Is this small specimen a distinct species, or a juvenile of a similar but larger type?’ All these questions can be difficult to answer, but we have to grapple with them in order to understand the biology of organisms in the past.”

Creating a phylogenetic (family) tree is a complex process involving selecting physical characteristics (323 of them to be precise in this study) found in dinosaurs, compiled from literature and visiting specimens in museums. This master list of characters - which includes elements such as skull length, tooth shape, vertebrae proportions and the number of joints in digits of the limbs - is then used to compare species against, with each being given a 1 or 0 depending on if the character is present, or a ? if unknown. This data is then fed into two specific types of analyses (parsimony and Bayesian analyses) to produce the phylogenetic trees.

“Finally, you end up with a giant table of zeros, ones, and lots of question marks,” Poole explains. “You then feed that into a program that tries to fit all that information into a phylogenetic tree, by telling it how many trees it should search, how many to keep in memory, which methods to use and when to stop the search. Parsimony is the simplest to understand - it searches for the tree with the fewest changes in character states (that is, a point in the tree where a character changes from 0 to 1 or 1 to 0). So, our only assumption for this is that evolution makes the minimum number of changes possible. Bayesian analyses make a lot more assumptions about evolutionary processes and rates up front, but also allow you to take the age of fossils into account during the analysis. People who study phylogenetics argue frequently about the benefits and drawbacks of each of these methods (plus another called maximum likelihood). My view is that if you find some of the same groupings using different analyses, that means the group is well supported by the data, regardless of the model being used. So where these two analyses match up, I’m fairly confident about the results. Where they differ is an area that needs to be looked at more closely.” 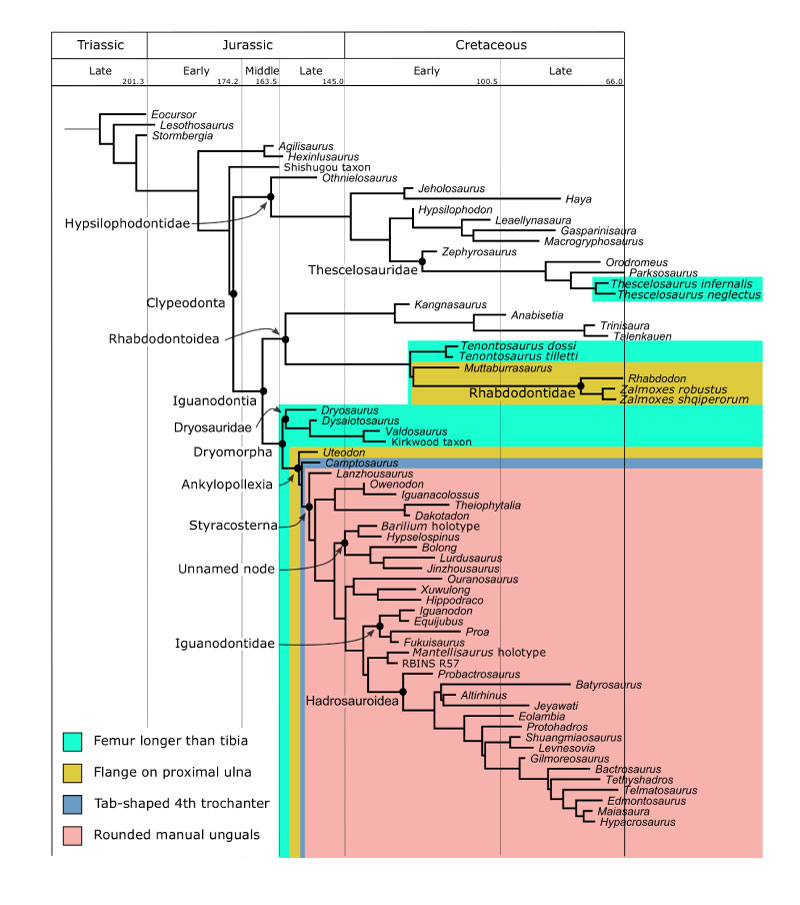 Poole’s new research specifically looks at the phylogeny of non-hadrosauroid iguanodontian dinosaurs to identify when the key change in locomotive style developed within the lineage history. The resulting phylogenetic tree places this transition from bipedality to quadrupedality as a step-wise occurrence over multiple lineages at the base of Ankylopollexia.

This is evidenced in particular by a change in carpal elements (wrist bones) of iguanodontians, which become “massive and fused together” as body size increased with the change to quadrupedality. The four key characteristics used to identify quadrupedality are: a projection on the ulna (the longer of two forearm bones) known as a flange which wraps around the radius (smaller forearm bone), the shape of the claws on digits two and three, femur (thigh) bones being longer than tibia (lower leg bone), and the shape of a muscle attachment site on the femur known as a trochanter.

But even with this important discovery, there are always more fossils needing to be unearthed to help constrain the phylogeny further.

“There’s always more work on something like this,” Poole says. “I’d say the area that’s weakest is toward the root of this tree - everything outside of Dryomorpha. These are the small, bipedal ‘ornithopods’. Historically, this group has been a potpourri of any small bipedal herbivore, but as we look closer, they’re really not all alike. In terms of overall evolutionary patterns, we have a lot clearer view of what’s happening within Dryomorpha, but there are still a lot of thorny taxonomic questions there to be sorted out. So, in the future, I’d expect to see some shifts in which specimens are assigned to which species, and which species are considered valid, but I don’t think that will result in huge changes to the phylogeny.”