How Fast Did T. Rex Run? Unsolved Questions from the Frontiers of Dinosaur Science
and
The Future of Dinosaurs: What We Don’t Know, What We Can, and What We’ll Never Know 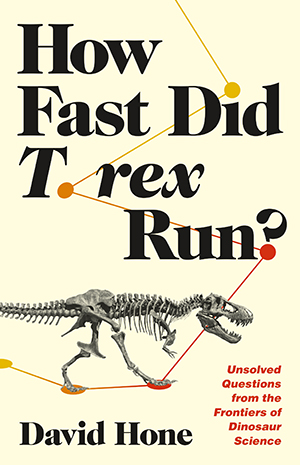 If you’re interested in dinosaurs, a waltz through your local museum will tell you everything you need to know. If a museum is too far, why not hop on the internet and browse through Wikipedia? In both places, you’ll find a wealth of information carefully curated (though perhaps more so in the museum) and exquisitely detailed. It would seem that everything anyone would want to know is there.

When one is not actively and directly involved in the process of scientific exploration, the details of how much scientists “know” something can be obscured. One can easily make the mistake of thinking of science as a collection of well-established facts and that if one wants to learn more, one only needs to dig a little deeper into the literature or check out an obscure book through interlibrary loan. Eventually, however, one will stumble right to the edge of human knowledge on their topic of choice. In How Fast Did T. Rex Run?: Unsolved Questions from the Frontiers of Dinosaur Science (published by Princeton University Press), Dr. David Hone invites us to explore the edge of human knowledge of dinosaur science. Dr. Hone takes readers on a tour of what we know about dinosaurs and, perhaps more importantly, what we don’t know.

The book represents a comprehensive overview (as much as any book can be on a subject so broad) of the current state of dinosaur science, while remaining accessible to a general, science-literate audience. Dr. Hone includes frequent asides throughout the text, inserting extra commentary or adding a wrinkle of detail for readers to explore further.

The book reviews various aspects of dinosaur biology and focuses on detailing the scope of our knowledge on each sub-topic. Each chapter is about 10 pages a-piece, dividing the book into easily digestible chunks. In addition, while each chapter topic flows into the next (Dr. Hone discusses diversity before evolution and behavior before ecology), the chapters are also self-contained, making it easy to read a chapter in a single sitting and then come back for the next chapter later. 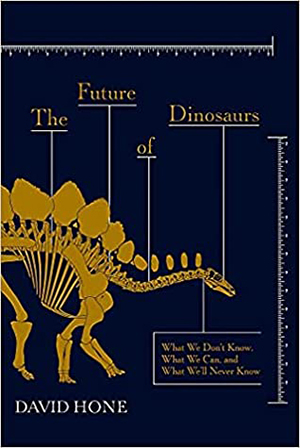 How Fast Did T. Rex Run? is not a new publication. Indeed, the text has been published in the United Kingdom under the title The Future of Dinosaurs: What We Don’t Know, What We Can, and What We’ll Never Know since March 2022. While the title How Fast Did T. Rex Run? captures the spirit of the public’s curiosity about dinosaurs, I find that The Future of Dinosaurs is equally apt as the alternative title as it features as the central theme of the book. This recurring theme is the contrast and contradiction between the great wealth of detailed knowledge we possess about the non-avian dinosaurs and the glaring gaps in our knowledge, particularly in areas where the uninitiated would assume scientists had resolved years ago.

Beyond providing an encyclopedia of factoids about various dinosaurs, How Fast Did T. Rex Run? is uniquely informative because it puts the fun-facts of other books in context. For example, whereas other books may provide readers with an estimate of how fast T. rex could run, How Fast Did T. Rex Run? provides insight into how scientists actually grapple with that question. Additionally, Dr. Hone explores surprising avenues of new research not well-known to the general public, such as exciting new discoveries that may finally shed light (pun-intended) on dinosaur coloration.

Throughout the book, the author also reflects on the interplay between human social factors (primarily, though not exclusively, technology) and the development of humanity’s knowledge about dinosaurs. Quoting Yogi Berra, Dr. Hone notes that “It's tough to make predictions, especially about the future,” but does point out that with computer and communications technology progressing at an ever more rapid pace and more advances in dinosaur science being made in the past 20 years than the past 200, we are surely in a golden age of dinosaur research.

So how fast did T. rex run? I do not want to spoil the book, but the answer is (like much of dinosaur paleontology) perhaps less conclusive than the lay dinosaur enthusiast would hope. Despite this lack of conclusiveness, herein lies a strength of Dr. Hone’s book. While both scientists and the general public are titillated over the question of how fast T. rex ran, scientists ask extra questions that go beyond the scope of what lay enthusiasts may have considered. “How fast did T. rex run?”, but also “how fast did its prey run?” and “how did T. rex change as it grew older?” While, as Dr. Hone explains, we may not yet have a conclusive answer to all of these questions, the information that we do have, as well as the new questions that each new tidbit of knowledge raises, paints a fuller picture of dinosaur biology than we could have imagined if we only had answers to each individual question we asked.

In How Fast Did T. Rex Run? / The Future of Dinosaurs, Dr. Hone explores what is known and what is currently beyond our grasp and, in doing so, paints a broad outline of the state of dinosaur science in the year 2022. The book does a good job at presenting dinosaur research as an evolving, human enterprise. Personally, I plan to (finally) read 1986’s The Dinosaur Heresies by Robert Bakker to compare the present work to what was once the cutting-edge walkthrough of dinosaur biology to better understand the advances we have made in studying dinosaurs in the past several decades.

To that end, How Fast Did T. Rex Run? is perfect for those interested in updating their understanding of dinosaurs. Since Dr. Hone provides a thorough review of the state of dinosaurology, the book can serve as an excellent companion to other dinosaur books, everything from older works like The Dinosaur Heresies to more encyclopedia-style books and even palaeoart. How Fast Did T. Rex Run? provides readers with the tools to critically examine dinosaurs in their lives and ask, “how do we know that?”