Fossil calibrations provide the crucial anchor points that allow molecular sequences to be used to date divergences in the Tree of Life. Time-calibrated phylogenies are essential to addressing questions in the biological and geological sciences: When did life and major taxonomic groups originate? What is the rate of genetic mutation? At what pace do genes and genomes evolve? How have rates of speciation and extinction changed through time? How has biodiversity been affected by physiographic and climatic changes in Earth history? Rigorous answers to these questions frequently rely on a combination of molecular phylogenetics and fossil calibrations to place Earth's biodiversity, past and present, into its temporal context. Sound paleontological data provide the lynchpin for sound calibrations.

Phylogeneticists and molecular biologists that are unfamiliar with paleontological science have viewed fossil calibrations as static data points culled from textbooks or other synthetic references. For example, in a seminal paper on the rate of mitochondrial DNA evolution, Brown et al. (1979) based their calibrations on the first appearance of grade-based Linnean taxonomic groups from Romer’s (1966) textbook Vertebrate Paleontology . Since then, improvements to the sequence analysis side of divergence dating include powerful algorithms for estimating the phylogenetic topology from sequence data, nuanced assessments of the error of the estimated dates arising from uncertainty in mutation rates and phylogeny, and methods that incorporate uncertainty in the age of fossils in a Bayesian framework. However, until recently, the criteria used to select fossil calibrations were not established, leading to an ongoing lack of rigor on that side of the synthesis.

As paleontologists are well aware, estimating a fossil’s age and phylogenetic position are matters of scientific inquiry, subject to their own errors relating to geological dating and phylogenetic analysis and thus inherently changeable with advances in knowledge. New fossils are discovered that push divergences back in time, old fossils are re-dated to change their age in either direction, and old phylogenetic hypotheses are toppled moving fossils to new clades. While this represents ordinary progress to a paleontologist, navigating such changes in the scientific literature to identify the best data for calibrating a particular phylogenetic node can be as challenging to non-paleontologists as choosing substitution models and interpreting SNPs are to researchers outside molecular biology.

In order to advance the field of divergence dating, a team of paleontologists, molecular biologists, and informaticians with shared interests in phylogenetics and the tempo of evolution, came together to establish best practices for fossil calibrations (Parham et al. , 2012) and developed a strategy for disseminating data founded on these principles (Ksepka et al., 2011). The National Evolutionary Synthesis Center (NESCent), the Encyclopedia of Life project, and BioSynC provided funding for this endeavor. The result is a new series of papers and an associated database hosted through Palaeontologia Electronica.

Our new Fossil Calibration Series (FCS) provides a one-stop venue for publishing peer-reviewed calibrations. Papers in the series provide the geological data that underpin the age of each fossil and the phylogenetic reasoning that associates it with a particular node in the Tree of Life following the five best practices (Parham et al., 2012):

The documentation in FCS papers provides users with the information needed to evaluate critically the evidence on which calibrations are based and competing claims from different authors. The use of taxonomic names may vary between different authors, leading to confusion over whether fossils belong to stem groups or crown groups. FCS papers will include phylogenetic trees that show precisely the position of fossils relative to the node to provide maximum clarity.

The series thus provides concise, referenced explication of the evidence written in a style that is accessible to non-paleontological audiences. We also envision the FCS as a forum for the community to comment on and discuss fossil calibrations, identify potential novel avenues of research, develop fruitful collaborations, contribute to educational outreach and promote evolutionary science in general. 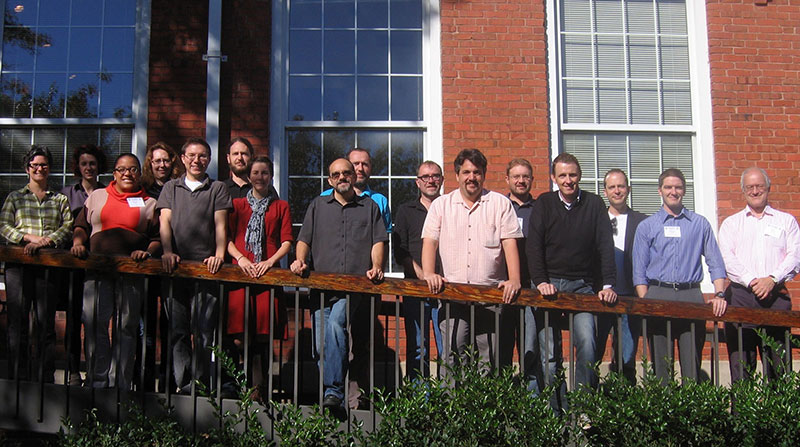 FIGURE 1. Attendees at one of the four meetings of the Fossil Calibration Database Working Group (2011-2014, October 2012 pictured). From left to right: Karen Cranston, Rachel Warnock, Jessica Ware, Elizabeth Hermsen, Daniel Ksepka, Adam Smith, Kristin Lamm, James Allman, Marcel Van Tuinen, David Polly, James Parham, Randall Irmis, Philip Donoghue, Jason Head, Nathan Smith, Micahel Benton.   Calibrations are summarized in the Fossil Calibrations Database (FCD), which was developed by the Fossil Calibrations Working Group (Table 1; Figure 1) and is now hosted by PE. The FCD is a centralized and updatable resource for accessing not only calibration dates, but also the phylogenetic and geochronological data associated with fossil calibrations. The database will evolve as new calibrations are added and existing calibrations are updated and overturned by new ones. While papers in the FCS are a permanent part of the scientific literature, they become outdated over time. When calibrations are overturned or become obsolete, updates will direct database users to the most current information. The FCD allows for the flagging or deletion of calibrations as new fossil discoveries, phylogenetic analyses, and stratigraphic revisions occur. A tree-based online database is thus superior to alternative data delivery options, such as an edited compendium, because of its storage and retrieval capacity and because it is readily updateable.

An important aim of the FCS and FCD is to provide incentives and rewards to scientists who have the expertise necessary to provide quality calibrations. This community is key to providing active, up-to-date information and for facilitating collaboration across relevant scientific disciplines. Users of the database are therefore asked to cite both the relevant FCS article and the paleontological literature in which the fossil specimens were originally described.

In this issue of PE the series and database open with more than 140 calibrations contributed by members of the Working Group. Key nodes in the Tree of Life that are of broad interest to the phylogenetic community, as well as nodes for selected clades that are the subject of current interest, were targeted to make the resource as useful as possible from its inception. Many clades of vertebrates and flowering plants are covered in this initial data set.

To ensure the database remains up-to-date and to extend its coverage to more of the Tree of Life, the Fossil Calibrations Series is now open to all contributors. If you work on the fossil record of a group that can constrain divergence timings of a crown clade, please consider contributing a calibration to the series. There is a strong, pervasive interest in well-justified calibration dates in molecular systematics, especially for the many diverse clades that have limited or understudied fossil record. Calibrations from specialists in such taxa are extremely valuable and will be highly cited.

The streamlined process of publishing new calibrations in the Fossil Calibration Series provides authors with a free, open-access, expedited, peer-reviewed venue for reaching the ever-growing audience of researchers interested in locating fossils that are useful for divergence dating. Furthermore, by amending previously published data to meet the criteria for publication as a fossil calibration (Parham et al., 2012) the Fossil Calibration Series also provides new opportunities to increase the visibility of meticulously collected data in an interactive and easily accessible format.

To oversee the FCS and FCD, two organizers of the Fossil Calibration Working Group, James F. Parham and Daniel T. Ksepka, have joined the PE board as Fossil Calibration Editors. They will send manuscripts for review, maintain calibration data in the FCD, and coordinate future developments of the database. For Author's Guide, see this PDF file.

Papers in the FCS, like all papers in Palaeontologia Electronica (PE), are fully open-access to readers and incur no page charges to authors. The costs of PE are minimized by volunteer efforts of its editorial board, the use of the Joomla, an open-source content management system, and manuscript handling through PEMSATS, which was written in-house by PE’s Technical Editor Mark Sutton. PE’s operating costs are underwritten by the Palaeontological Association, the Paleontological Society, the Society of Vertebrate Paleontology, and the Western Interior Paleontological Society, all of whom are dedicated to supporting research and broad dissemination of paleontological knowledge. Papers in the series are published immediately after acceptance, often only days later.