As remembered by R. Timothy Patterson 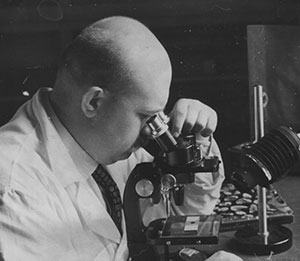 Medioli working at his microscope in the late 1970s.

Professor Franco Medioli passed away peacefully on January 31, 2014, in Halifax, Nova Scotia, at the age of 78. The Cushman Foundation had only three months earlier honored him with the Joseph A. Cushman Award for Excellence in Foraminiferal Research at the annual meeting of the Geological Society of America in Denver, Colorado. Due to poor health, he was unable to accept the award in person. This lifetime achievement award recognized his research on the paleoecological significance of marginal-marine foraminifera as a critical tool in reconstructing Holocene sea-level, as well as his contributions to resolving taxonomic issues within the freshwater thecamoebians (testate amoebae).

I first met Professor Franco Medioli in September,1980, when as an undergraduate I decided, on a lark, to take his introductory course in geology at Dalhousie University in Halifax, Nova Scotia. Through the academic year Dr. Medioli, a larger than life and jovial individual, imparted the basics of geology to the class and also regaled us with a steady stream of anecdotes of geological adventures derived from his experiences as a field geologist. Thus, in addition to learning about the practical matters of taking strike and dip and recognizing the characteristic sedimentary sequence found in a typical delta, we also learned what it was like to bob around in the North Atlantic on a research vessel, to hang off a climbing rope in a crevasse on a mountain glacier in the Alps, to sit under a Joshua tree in the middle of Death Valley, to scuba dive on reefs in the Caribbean, and much more. The exciting life that awaited those who chose a career as a geologist so impressed Franco’s wide-eyed audience that by the end of the year he had convinced a significant number of us, including me, to change our majors. Taking that incredibly engaging introductory course from Franco Medioli was one of those watershed events in life that completely changed my future career path. Looking back over the near 35 years since that chance course decision I am forever grateful to Franco for not only that initial nudge to geology, but for the mentoring that he provided through the years that followed as I developed from a student to a professor in my own right.

In appreciation of the start that he gave me in geology, and in recognition of his research on thecamoebians I have named a new genus, Mediolus, in his honor. The paper was in review at Palaeontologia Electronica when I learned of his passing and is now published.

Franco was born in Parma, Italy, the son of the late Nino and Beatrice (Ruffini) Medioli. Hardships experienced as a child in fascist wartime Italy and during the postwar reconstruction greatly influenced him throughout his life. He would forever carry the memories of those years and as a result was quick to advocate for those in need, lend a hand, or offer a clear perspective on life’s inequities. As a youth, Franco was very athletic, skiing the Alps and playing on his university rugby team. He also had an appreciation of the arts, being an avid painter, amateur actor during his university years, and life long fan of opera and classic Italian film. He obtained his Bachelor’s degree in 1953 from Collegio Maria Luigia, Parma, Italy. For his Ph.D. in Geology, awarded in 1959 from the l’Università degli studi di Parma, he researched ‘‘Neogene deposits north of the torrent Sporzana with study of the fossil ostracod microfauna’’ under the supervision of Professor Sergio Venzo. Franco subsequently spent a year in London to improve his English, and as a post-doctoral fellow at the Institut Français du Pétrole in Paris he continued his research on fossil Ostracoda. He then worked as a field geologist with the Servizio Geologico d’Italia (Italian Geological Survey) from 1961-1965 where he updated the 1:100,000 geological map of the Emilia-Romagna region in the Apennines of northern Italy and surveyed the glacial deposits around Lago di Garda (northern Italy). 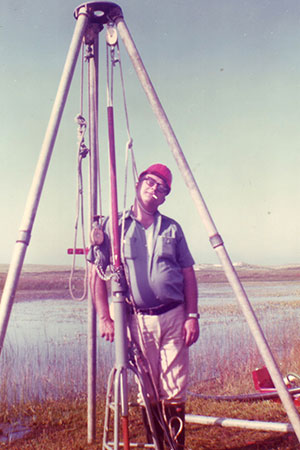 Franco goofing off while coring a marsh in Chezzetcook Marsh in Nova Scotia. It was in these marshes that he and long time collaborator Dave Scott did work that resulted in a Nature paper (1978, 272:528-531) where they first demonstrated that marsh foraminifera could be used as high resolution paleo-sea level indicators.

Nineteen sixty-five was a watershed year in Franco’s life. He obtained a NATO post-doctoral fellowship in marine geology that took him as a newlywed to Halifax, Nova Scotia. Franco and his wife Caterina fell in love with Nova Scotia and Canada and so were pleased to be able to stay on in Halifax when Franco was offered an assistant professor position at Dalhousie University. Franco continued to teach and carry out research until his retirement as a full professor in 1996.

Franco had diverse research interests. Although his Ph.D. was on Ostracoda, later research through the 1960s ranged from analysis of Upper Cretaceous nanoplankton from southern Saskatchewan, published with Francesco Barbieri, to determining the distribution of foraminifera on the Scotian Shelf of Nova Scotia, to work on the Bermuda Platform. During this time he also found time to take up a temporary lectureship at UC-Santa Barbara during a sabbatical year.

Franco was also active as an associate editor for the journal Maritime Sediments and was a main organizer of the very successful international conference ‘‘Benthonics ’75,’’ which was held in Halifax. He served as the Associate Director, Centre for Marine Geology at Dalhousie from 1985-1989. Not limiting his service to the field of geology, Franco also found time to serve as the Honorary Italian Consul for Nova Scotia from 1975-1981.

Through the 1970s and 1980s Franco’s research focused on analysis of nearshore and offshore foraminifera of the North Atlantic. In association with long-time collaborators David Scott (Dalhousie University) and Charles Schafer (Geological Survey of Canada) he carried out extensive work on the foraminiferal assemblages found in the coastal salt marshes and estuaries of the Maritimes. This research led directly to the discovery of a new method for accurately determining former sea-level environments in sediments exposed by post-glacial uplift. As an extension of this research he worked with Franco Petrucci in Italy to determine the utility of foraminifera as sea-level indicators in the Venice lagoon. 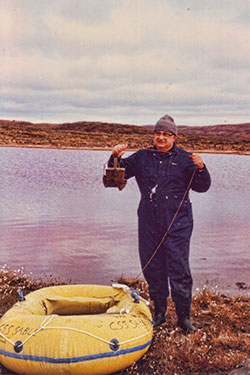 On the way to the Arctic in the early 1980s where Medioli did work on thecamoebians found in small lakes there.

By the early 1980s, Franco began to study yet another microfossil group, freshwater thecamoebians, from Lago di Garda in Italy and Lake Erie in North America. As he began to delve into the literature, he realized that the group was in dire need of taxonomic revision. His research program through the rest of his career emphasized this then little-known group of microfossils. In collaboration with David Scott, he demonstrated that this group of asexually reproducing organisms could produce a great variety of very different morphotypes, often previously described as distinct species, either randomly, as a response to ecologic drivers, or as a result of some taxa having both pelagic and benthic life stages. With David Scott and Charles Schafer he authored a comprehensive guide to using foraminifera and thecamoebians for monitoring coastal environments in 2001. The first edition of this book sold out and was re-released in 2007. Franco also amassed a huge collection of thecamoebian literature, which he eventually summarized in an easily accessible, electronic bibliography, which was published in Palaeontologica Electronica in 1999 (v. 2 no. 1) and updated in 2003 (v. 6. no. 2). This groundbreaking work is the solid foundation upon which much of my own current research is built. In addition to the many personal reasons, it is the professional reason for the naming of the genus Mediolus (see Mediolus, a new genus of Arcellacea (Testate Lobose Amoebae) by R. Timothy Patterson). In addition to his work on Holocene and modern thecamoebians he also published on the fossil occurrence of the group in Early Cretaceous deposits from Alberta.

In 1989 Franco was offered a position as Chair in Paleoecology at the Università di Parma. This was an irresistible offer and he temporarily took a leave of absence from Dalhousie University to return to his beloved hometown, where he stayed for three years before returning to Halifax. In 1996 he retired from Dalhousie and was subsequently appointed Professor Emeritus. Franco continued his research activities well into retirement. Through his career Franco authored nearly 90 peer-reviewed papers and book chapters. A true Geologist at heart, his fondest memories were of his many seasons spent in the field, particularly work in the Canadian Arctic, on Sable Island, throughout the marshes and estuaries of the Maritimes and at sea in the North Atlantic. He supervised a large number of graduate students, many of whom have gone on to distinguished research scientists and professors themselves, including Dr. Claudia Schroder-Adams (Carleton University) and Dr. Alessandra Asioli (University di Pavia).

We have lost a talented scientist, mentor, teacher, colleague, friend, loving husband and father, who will be remembered for his scientific research, publications, and the legacy of his students and children. He is survived by Caterina, his beloved wife of 48 years, daughters Maria and Barbara and four grandchildren Daisy, Franco, Claire and Margaret.