Mediolus, a new arcellacean genus of the Difflugidae (informally known as thecamoebia, testate rhizopods, or testate lobose amoebae) differs from other genera of the family in having distinctive tooth-like inward oriented apertural crenulations and tests generally characterized by a variable number of hollow basal spines.

Arcellacea (also informally known as thecamoebians, testate amoebae, testate rhizopods, or testate lobose amoebae; Patterson et al., 2012) are a diverse group of unicellular testate rhizopods that occur in a wide array of aquatic and terrestrial environments (Patterson and Kumar, 2002) from the tropics to poles (Dalby et al., 2000). Although most common in Quaternary sediments fossil arcellaceans have been found preserved in sediments deposited under freshwater and brackish conditions spanning the Phanerozoic and into the Neoproterozoic (Porter and Knoll, 2000; Van Hengstum, 2007).

Within the Arcellacea the genus Difflugia Leclerc, 1815 is the most species rich, being comprised of more than 300 species and 200 subspecies (Meisterfeld and Mitchell, 2008). At the species level, especially for fossil material, the most important characteristics for systematic placement, has generally been the shape and size of the simple unilocular test (e.g., Bonnet, 1975; Medioli et al., 1987, 1990; Beyens and Meisterfeld, 2001), although some researchers have placed more emphasis on test composition (e.g., Anderson, 1988). The proliferation of species descriptions within the Difflugia, often based on subtle test differences, has resulted in considerable taxonomic confusion (Patterson and Kumar, 2002). Researchers have often described new species based on regional interest, often with little consideration of the previous literature or the systematic value of distinguishing characters (see discussions in Medioli and Scott, 1983; Medioli et al., 1987; Ogden and Hedley, 1980; Tolonen, 1986; Bobrov et al., 1999; Charman et al., 2000). On the other hand recent research suggests that many morphologically indistinguishable species may actually be cryptospecies (Mitchel and Meisterfeld, 2005; Alizon et al., 2008; Heger et al., 2013; Oliverio et al., 2014). Species ascribed to Difflugia are characterized by a wide variety of morphologies, some bearing little resemblance to the type species Difflugia protaeiformis Lamarck, 1816 (lectotype designated by Loeblich and Tappan, 1964, p. C35, as the specimen illustrated in Lamarck, 1816, pl. 17, figure. 5), which is characterized by an amphora-shaped test with narrow aperture and tapering at the base to a point (Figure 1.1-3).

There have been various attempts to subdivide this large genus into more manageable subgroups. For example, Gauthier-Lièvre and Thomas (1958) divided the genus into 10 artificial groups based on morphologic test variability (e.g., elongate, globose, ovoid, urceolate, pyriform, and compressed tests; lobate, collared, and toothed apertures; presence or absence of spiked processes). Mazei and Warren (2012) carried out a similar survey of Difflugia species, informally subdividing the genus into groupings based on morphology. The newest available systematic tool to potentially study the systematics of Difflugia is the application of molecular systematics. Unfortunately, due to the difficulty of sequencing protists with agglutinated tests, only a handful of studies have been carried out on thecamoebian taxa (e.g., Nikolaev et al., 2005; Lara et al., 2008; Kudryavtsev et al., 2009), and only a single study has been carried out on Difflugia (Gomaa et al., 2012). In an analysis of five taxa (

Difflugia bacillariarum Perty, 1849, D. hiraethogii Ogden, 1983, D. acuminata Ehrenberg, 1838; D. lanceolata Penard, 1890; D. achlora Penard, 1902) Gomaa et al. (2012) determined that Difflugia is not monophyletic, and as suggested in previous morphologic studies, shell shape, and not test composition, most closely correlates with genetic clades. Genetic analysis of Arcellacea is in its infancy, and it will be many years before such analysis is routine. It is obvious though, that due to the morphological plasticity within lineages across evolutionary time scales, it will be a combination of morphometric and molecular analysis that will eventually provide a more complete understanding of arcellacean biodiversity (Oliverio et al., 2014). New advances in morphometric analysis techniques may also provide guidance as to the validity of at least morphologically distinct taxa. 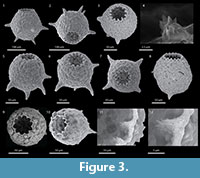 One of the most distinctive and easily recognizable arcellacean taxa is D. corona, Wallich, 1864, which is characterized by an agglutinated subspheroidal test, a fundus covered with a variable number of processes and a round aperture bordered by numerous crenulations or teeth (Figure 2.1-2; Figure 3.1-12). Aside from both being unilocular and characterized by an agglutinated test this species bears no resemblance to the Difflugia type species, D. protaeiformis (Figure 1.1-3). In an attempt to make a start at formally breaking Difflugia into more systematically realistic groups it is proposed that D. corona be recognized as the type species of the new genus Mediolus n. gen.

Diagnosis. A genus of Difflugidae characterized by a symmetrical globular test, a test most typically comprised of agglutinated particles from the environment, round aperture with multiple inward-oriented angular tooth-line crenulations, and a test typically characterized by a variable number of spines extending outward on the test.

Remarks. The genus is readily distinguished from Protocurbitella Gauthier-Liévre and Thomas, 1960, as Mediolus lacks the distinctive diaphragm around the peristome. The peristomal diaphragm of Protocurbitella is similar to a similar structure characterizing Cuburbitella Penard, 1902. In addition, the pronounced lobed apertural collar of Cucurbitella is also very distinct from the apertural crenulations characterizing Mediolus. Cucurbitella is distinct from most other arcellaceans with regard to its distinctive relationship with some algal species. As the spring and summer growing season progresses and algae begins to grow into the water column Cucurbitella individuals go with it. In the absence of xenogenous grains to construct their test, late season specimens of this genus have the ability to produce idiosomic particles, which they use to construct their shell (Schönborn, 1984; Medioli et al., 1987). Mediolus differs from Loboforamina Jung, 1942 in that the latter is characterized by a lobate apertural region similar to that found in Cucurbitella.

As illustrated in this paper living representatives of Mediolus are found from the tropics to the poles. It is relatively common in mesotrophic to eutrophic lakes where it is often found attached to water plants (Medioli and Scott, 1983; Roe et al., 2010; Patterson et al., 2012; Roe and Patterson, 2014). It is less common in ponds and ditches and has also been reported from sphagnum bogs. Individuals are heterotrophic using its lobose pseudopods to engulf organic material or smaller prey (e.g., diatoms and bacteria) (Medioli and Scott, 1983). 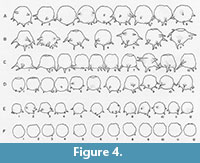 The crenulated aperture typical of the type species D. corona is much more diagnostic of the genus that the spines. Using broods of D. corona, Jennings (1916) carried out what is now recognized as a classic experiment on hereditary in uniparental organisms. He found that although clones differed greatly in overall size and the number of spines produced through many generations, there was an almost perfect correlation between the number of apertural teeth produced within brood lineages. As the spines would sometimes disappear entirely in some broods it is the apertural teeth that are the single most distinguishing characteristic of Mediolus (Figure 4). The seasonally planktic species Difflugia tuberspinifera Hu, Shen, Gu, and Gong, 1997, a species endemic to east Asia, is morphologically similar to D. corona, differing in that the toothed aperture in D. tuberspinifera tends to be contained within a protruding apertural flange, and that the conical spines are restricted to the upper equatorial region (Yang et al., 2004; Han et al., 2008). Yu et al. (2014) have recognized that, as also observed in D. corona, spineless strains also exist. Based on the general similarity of the apertural crenulations in both D. corona and D. tuberspinifera, the latter species is tentatively assigned to Mediolus.

The extreme range of habitat observed for the type species of Mediolus may provide indirect evidence that it may encompass two or more cryptospecies. A possible non-genetic analysis approach to eventually test this hypothesis has been demonstrated using planktic foraminifera (Morard et al., 2013). Using transfer functions Morard et al. (2013) modeled the temperature dependence of several species of planktic species in the southern hemisphere and determined that several morphologically indistinguishable morphotypes are most likely distinct species.

Etymology. In honor of the late Professor Emeriti Franco Medioli (1935-2014), Department of Earth Sciences, Dalhousie University, in recognition of his extensive research on the ecology, systematics, and biostratigraphy of Arcellacea and related groups (Patterson, 2014).

This research was supported by a Natural Sciences and Engineering Research Council (NSERC) Discovery Grant to RTP.

Jennings, H.S. 1916. Heredity, variation and the results of selection in the uniparental reproduction of Difflugia corona. Genetics, 1:407-534.

Kent, W.S. 1880. A manual of the Infusoria: including a description of all known Flagellate, Ciliate, and Tentaculiferous Protozoa, British and foreign, and an account of the organization and affinities of sponges, Vol. 1. Bogue, London.

Mazei, Y. and Warren, A., 2012. A survey of the testate amoeba genus Difflugia Leclerc, 1815 based on specimens in the E. Penard and C.G. Ogden collections of the Natural History Museum, London. Part 1: Species with shells that are pointed aborally and/or have aboral protuberances. Protistology, 7:121-171.

Roe, H.M., Patterson R.T., and Swindles, G.T. 2010. Controls on the contemporary distribution of lake thecamoebians (testate amoebae) within the Greater Toronto Area and their potential as water quality indicators. J ournal of Paleolimnology, 43:955-975.

Wallich, G.C. 1864. On the extent, and some of the principal causes of structural variation among the difflugian rhizopods. Annals and Magazine of Natural History Series 3, 13:215-245.