A new early occurrence of Cervidae in North America from the Miocene-Pliocene Ellensburg Formation in Washington, USA

A new fossil cervid from the Craig’s Hill locality of the Miocene-Pliocene Ellensburg Formation in the State of Washington, USA, may be one of the oldest fossil deer yet found in North America, underlying a date of 4.9 Ma ± 0.1 Ma. This mandible fragment with m2, m3, and associated p2 has a size that does not distinguish it from Bretzia pseudalces, Odocoileus hemionus, or Capreolus constantini, and distinguishes it from Eocoileus gentryorum and Odocoileus lucasi only in having a thinner p2. A strong paraconid on the p2, and ectostylids and cingulids on the m2 and m3 link it most strongly with Bretzia pseudalces, but these are also intermittently present in Odocoileus hemionus. Because of the close geographic and temporal proximity of Bretzia pseudalces in the Ringold Formation, and its shared morphology with Bretzia, we are tentatively assigning this specimen to cf. Bretzia.

Copyright: March 2020 Paleontological Society.
This is an open access article distributed under the terms of Attribution-NonCommercial-ShareAlike 4.0 International (CC BY-NC-SA 4.0), which permits users to copy and redistribute the material in any medium or format, provided it is not used for commercial purposes and the original author and source are credited, with indications if any changes are made.
creativecommons.org/licenses/by-nc-sa/4.0/

The available evidence suggests that Cervidae arrived in North America around 5 million years (Ma) ago and dispersed into South America by approximately 1.5 Ma (Webb, 2000; Jiménez-Hidalgo and Bravo-Cuevas, 2014). The early occurrences of Cervidae in North America are sparse (Jiménez-Hidalgo and Bravo-Cuevas, 2014; Gustafson, 2015), with two localities contending for the earliest record: Bretzia pseudalces from the Ringold Formation in Washington at 4.98 Ma-4.89 Ma (Gustafson, 2015), and Eocoileus gentryorum from the Palmetto local fauna of Florida, USA, at 5 Ma-4.7 Ma (Webb et al., 2008). Odocoileus sp. has also been identified in the Palmetto local fauna of Florida, though it has not been formally described (Gustafson, 2015). Voorhies and Perkins (1998) did mention in an abstract the occurrence of an antler assigned to cf. Bretzia, coming from below the Santee Ash bed, which has been dated at 5.0 Ma ± 0.2 Ma using fission tracks (Boellstorf, 1976), but the specimen has not been formally published. 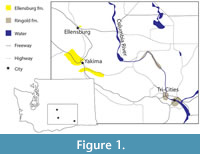 The Ellensburg Formation is a Miocene-Pliocene sedimentary rock unit from central Washington, USA (Figure 1). It is comprised of a suite of sedimentary deposits interleaved with and overlying the Columbia River flood basalts (Figure 2) (Smith, 1988a). These sediments include epiclastic and volcaniclastic rocks, which are predominately sourced from the Cascades (Reidel and Campbell, 1989). The Ellensburg formation is divided up into several members and loosely described in terms of the Lower Ellensburg formation, overlying the Grand Ronde Basalt dated at 17 Ma (Smith et al., 1988), and the Upper Ellensburg, beginning above the 11.5-million-year-old Pomona Member of the Saddle Mountains Basalt (Smith, 1988b). Upper Ellensburg sediments include conglomerates, lahars, fluvial sandstone, mudstone, and lacustrine laminations (Smith, 1988a). Previous research has revealed fossil localities in the Upper Ellensburg Formation (Martin and Mallory, 2011), with an associated date of 7.41 Ma ± 0.36 Ma. The uppermost age of the Ellensburg formation is 4.7 Ma, with the youngest known material appearing in the Yakima basin (Smith, 1988b). 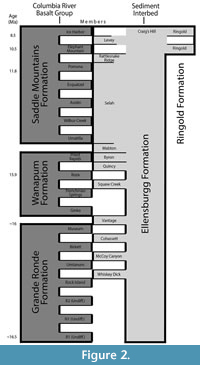 Craig’s Hill is a locality in the middle of the fairgrounds and adjacent city property in Ellensburg, Washington, which spans the Upper Ellensburg Formation into Pleistocene and Holocene soils (Lamb, 1997). The sedimentology of the Craig’s Hill locality has been described (Waitt, 1979; Lamb, 1997), but to our knowledge no fossils have been described from this locality. The specimen described here and other fragments of bone and enamel were found weathering out from a paleosol underlying gravels from the Upper Ellensburg Formation (Figure 3).

An unpublished undergraduate thesis dated a sample of a tephra layer at the base of the gravels directly overlaying the paleosol (Lamb, 1997). This date was 4.9 Ma ± 0.1 Ma, considerably younger than previous estimates of 10 Ma-8 Ma for the Kittitas basin sections of the Ellensburg Formation (Smith, 1988b; Lamb, 1997). Because cervids are not known from North America prior to 5 million years ago (Webb, 2000; Jiménez-Hidalgo and Bravo-Cuevas, 2014), the discovery of a cervid fossil in the Ellensburg Formation at the base of this outcrop, described here, is consistent with this younger date.

The nearby Ringold Formation (Figure 1) is of similar age and sedimentological setting, with abundant Pliocene vertebrates. Though currently regarded as separate, the Ringold Formation is occasionally treated as a member of the Ellensburg Formation (e.g., Smith, 1988b).

The specimen University of Washington Burke Museum (UWBM) VP 117138 (Figure 4) was spotted weathering out of the hill in the fall of 2016 by a graduate student at Central Washington University, and left in place over the course of the winter while permission was obtained from the county to remove the fossil. When initially discovered, the mandible and premolar were connected; after a winter’s worth of weathering, they were not, and the connecting bone was not recovered. The specimen is stored at the Burke Museum of Natural History in Seattle, Washington. 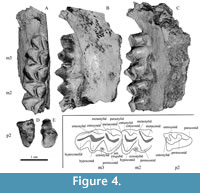 Description. The strong ectostylid on m2 and m3, clear molar metastylids, and unfused molar postmetacristid and pre-entocristid place this mandible firmly in the family Cervidae. Of the three species previously known from the Pliocene and Pleistocene of Central Washington, UWBVM VP 117138 is close in size to both Bretzia pseudalces and Odocoileus ensifer (Fry and Gustafson, 1975). Odocoileus ensifer is very similar in size and morphology to Odocoileus hemionus (Fry and Gustafson, 1975), and may be a junior synonym (Anderson and Wallmo, 1984). Given this and the lack of dental material for Odocoileus ensifer, we compared our material to Odocoileus hemionus as per Gustafson (2015), as well as Odocoileus lucasi as figured in Morejohn and Dailey (2004). Bretzia nebrascensis (Gunnell and Foral, 1994) is also a possibility, but only antlers have been described, and thus a comparison with our material was not possible. Eocoileus gentryorum (Webb, 2000) and Capreolus constantini (Vislobokova et al., 1995; Jiménez-Hidalgo and Bravo-Cuevas, 2014) are also considered here.

Like Bretzia and Capreolus, UWBM VP 117138 has a cingulid on m3. Like Odocoileus hemionus, Odocoileus lucasi, and Eocoileus gentryorum, UWBM VP 117138 does not have a cingulid on m2 (Table 2). Molar cingulids are highly variable in single-location samples of fossil artiodactyl dentition and their absence or presence may not be diagnostic (Emery et al., 2016). It is, therefore, possible that while UWBM VP 117138 did not have an m2 cingulid, other members of the population did, and this absence may not be diagnostic.

The p2 of UWBM VP 117138 is within two standard deviations of the lengths and widths of Bretzia, Capreolus, and Odocoileus hemionus, but exceeds two standard deviations of the average width of Eocoileus and is nearly half the length of Odocoileus lucasi (Table 1). The CV of p2 widths of Eocoileus reported by Vislobokova (1995) was 9.6 %, which is similar to the measured variation in Odocoileus in this study and is closer to what is expected for a mid-sized artiodactyl (Emery-Wetherell and Davis, 2018), and therefore the difference in size between our specimen and Eocoileus is likely biologically meaningful. Odocoileus lucasi is considerably larger, with a p2 length approximately twice as long as any of the other species we considered - on par with the size of Cervus elaphus. This is far outside the expected size range for our specimen, and disqualified O. lucasi as a possible identification.

Morphologically, the p2 has a strong paraconid, similar to Eocoileus and Bretzia, and dissimilar to Capreolus (Vislobokova, 1995; Webb, 2000; Gustafson, 2015). Gustfason (2015) reports the paraconid as being present in Bretzia, and either absent or weakly present in Odocoileus hemionus. In our sample of Odocoileus hemionus, five of nine specimens with a p2 had no obvious paraconid, two had a weakly present paraconid, and two had a prominent paraconid, confirming the findings of Gustafson (2015). The figured p2 of Odocoileus lucasi in Morejohn and Dailey (2004) is worn, but appears to have a prominent paraconid as well.

Overall, the specimen morphologically overlaps with many cervid species of the same age (Table 2) and is similar in size to most as well (Table 1). The closest morphological match is Bretzia or Odocoileus hemionus. As there is considerable morphological similarity to Bretzia, which is found in the nearby and similarly-aged Ringold Formation, we have tentatively assigned UWBM VP 117138 to cf. Bretzia.

In size, UWBM VP 117138 is only distinguishable from Odocoileus lucasi and Eocoileus gentryorum. Odocoileus lucasi is much larger, and while Eocoileus is similar in most measurements, it has a p2 that is thinner than our specimen. In all other measurements UWBM VP 117138 is indistinguishable from nearly all considered species, except Odocoileus lucasi. Though the lengths of m2 and m3 are smaller than two standard deviations of Bretzia, the population of Bretzia measured by Gustafson (2015) is far less variable than is typical in mid-sized artiodactyls (Emery-Wetherell and Davis, 2018). The maximum lengths of artiodactyl teeth are often smaller in older adults with worn teeth (Emery-Wetherell and Davis, 2018), and given that UWBM VP 117138 is very worn, it is possible it is simply older and therefore smaller than the measured specimens of Bretzia reported by Gustafson (2015), or that the size difference may arise only from being found at different localities.

Though UWBM VP 117138 has commonalities with Bretzia pseudalces, Odocoileus hemionus, Eocoileus gentryorum, and Capreolus constantini, it shares the most morphological features with Bretzia, as well as close geographic and temporal proximity. It is possible that UWBM VP 117138 does represent an unusual specimen of another Pliocene cervid, and so we tentatively refer this specimen to Bretzia with the acknowledgement that more material will clarify this identification.

The youngest previously published estimates for the Upper Ellensburg age are a date of 7.41 Ma ± 0.36 Ma (Martin and Mallory, 2011) and a mentioned unpublished date of 4.7 Ma without provenance (Smith, 1988b). If the former published date was applicable, then this occurrence of Bretzia would be significantly older than the expected arrival time of Cervidae in North America. The date of 4.9 Ma ± 0.1 Ma (Lamb, 1997) overlies our fossil and is more in line with other early occurrences of cervids. Thus, it is likely that this cervid mandible represents a younger uppermost age distribution for the Upper Ellensburg Formation in the Kittitas basin, rather than a significantly older incursion of cervids into North America. However, given that the paleosol containing the fossil is stratigraphically below the date, it is possible that considerable time passed between the deposition of the fossil and the deposition of the tephra - meaning that the mandible could be considerably older than 5.0 Ma.

L. Wetherell (Central Washington University) who found the specimen. L. Young (Kittitas County Fairgrounds) who worked with the City Council of Ellensburg to get the specimen transferred to the Burke Museum. J. Lamb who initially dated the material above the fossil.