The Diatoms: Applications for the Environmental and Earth Sciences

It seems that in the 21st century, discussions of diatoms are everywhere, as the roles they play in global nutrient, oxygen and silica cycling, their utility in understanding the status and trends of aquatic ecosystem health, harmful algal blooms, and their potential as a possible source of renewable fuels are better understood and appreciated. Hence the second edition of a very influential book (Stoermer and Smol 1999) on the applications of diatoms has been much anticipated. This second edition is much expanded, from 20 chapters in the 1st edition to 36 chapters, written by 67 authors.

I should note that the author list reads like a Who’s Who in Diatom Research. All of the authors are well-known in the world of diatom research, and have established reputations and many publications in their areas of expertise. As such, the chapters are authoritative, and assemble much of the established literature on the topics presented. Thus, it is THE authoritative book on the topic. It is worth noting, however, that of the 67 authors only 4 are from outside of North America and Europe. These authors are from Australia New Zealand, and Japan, and there are no authors from Mexico, South America, Africa or elsewhere in Asia for this book. 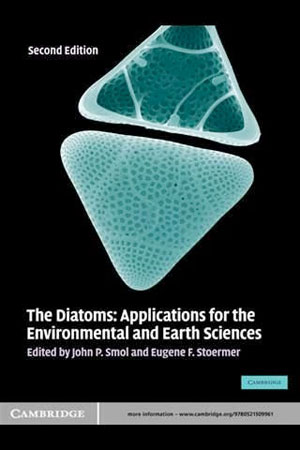 The editors set the tone for the book overall, indicating, “…we now live in interesting times. Diatoms have proven to be extremely powerful indicators with which to explore and interpret many ecological and practical problems” (Smol and Stoermer, p. 6). The power of this volume rests more on the ecological rather than taxonomic or practical problems with which diatoms are being used in the 21st century. It will be an important resource for those interested in the ecology of diatoms or who have research programs that utilize diatoms to understand ecosystems. Thus, this volume would be of great value to people working with paleo-environments and taxa generally, and paleoecologists specifically, who need a resource for understanding these important environmental proxies in their assemblages.

Indeed, for ecological problems, nearly every habitat imaginable has a chapter devoted to it, and each of these chapters provides an overview of the that habitat and how diatoms have been studied in that context, surveys the literature of that field of research, and offers summary or concluding remarks about the area of research. Many of the chapters also look prospectively to what might lie ahead in that area or discipline. The topics range from freshwater to estuarine to marine, and the time frames covered may be Recent to deep time. For the latter, chapters on “Diatoms as indicators of paleoceanographic events” describes correlations of diatoms and climatic and tectonic events, from the Paleocene to Pleistocene, and in “Diatoms in oil and gas exploration”, where diatoms are matched up with specific oil reserves, the time frame extends back to the Paleocene as well. Many specialty systems, such as aerophilous communities, coral reefs and peatlands are given their due. For some of these systems, the summary information is not much more than, “not much yet” but for many of these systems that is the current state of the field and these summaries offer the best reviews currently available.
Despite the wide range of temporal and spatial scales covered, many of the approaches used are similar, including autecological or community-based analyses to determine past and present human-induced perturbations, and the ecological response of diatoms to those perturbations (eutrophication, acid rain, climate change) and attempted solutions to them. There is a plethora of localities investigated, statistical approaches represented, and a wide range of taxa discussed.

There are some chapters that do not fall into this model, however. I applaud Stevenson et al for devoting their chapter (Chapter 4) on “Assessing environmental conditions in rivers and streams with diatoms” more to their concept and vision of the topic (with many citations of the works of others, mind you) than a survey of what has been done. It is clearly written, and one can easily understand the methods and approaches advocated by these two scholars. Their own work is innovative, and has been responsible for moving the field forward.

As the book is organized by chapters providing an overview of specific habitats, there is not an overview or summary chapter on the application of diatoms to studying water quality, especially the monitoring of flowing freshwaters. It could be argued that the work of Kolkwitz and Marsson, and the German and English schools in the 1930’s and 1940’s, and led in the US by Ruth Patrick in the 1950’s and onward, really laid the intellectual groundwork for all the other disciplines of ecological study that since evolved from it (and are now worthy of chapters in this present tome). From this foundation, there have been in the USA huge, national-scale projects to apply diatoms to understanding water quality, and similar programs occur across the European Community, and in many individual countries such as France and Japan. In the USA, individual states, counties and municipalities have mandated or selected diatoms as biological assessment tools. It is noteworthy, and a shortcoming of this book, I think, that some of these large-scale projects (such as NAWQA-National Water Quality Assessment Program or EMAP—Environmental Monitoring and Assessment Program) are not described nor explored in detail. In fact, both of these national-scale projects, costing multi-millions of dollars, and having been in existence for decades, have each received just a single, passing mention in this volume. Hence, for paleontologists, perhaps the largest data sets relating diatom species to environmental variables (generated in NAWQA and EMAP), which could be useful in a wide range of studies in paleolimnology to paleoecology, are not even mentioned. It is a significant shortcoming of the volume.

In these “interesting times” it is refreshing and interesting to see chapters devoted to topics such as toxic diatoms, forensics and nanotechnology. These will help teachers and students alike better understand the myriad of ways diatoms are applied to practical problems related to health sciences, national security and global environmental changes. However, from an applications point of view, it is most difficult to imagine that a book published in 2010 on diatoms has not a single chapter (and from the index, not a single word) related to biofuels. This topic is to be found across the popular press, and is exploding across the internet. And while the current phase of biofuels research is notoriously secretive, given the national-scale efforts such as NREL (National Renewable Energy Lab) in the US, as well as European Community-wide strategies, and the huge monetary investments made by private companies, it seems a great oversight and detracts from the book’s appeal to a broader audience to not even mention the topic.

The index, which lists every locality mentioned, only provides reference to diatoms at the level of genus, not the full scientific names. As well, since each author was given leadway to use their own taxonomic approach, if one was interested in finding all the references to a single taxon, say, Achnanthidium minutissimum, a search of all the Achnanthes and Achnanthidium references also would be necessary. Thus, it is not a user-friendly index in my view.

This book will be a wonderful resource for many teachers at the University level, as well as students wanting to learn more about diatoms. It is physically sturdy, and should be durable for the many times it will be opened. It should be useful for neontologists and paleontologists alike. The chapters are well written, making it accessible and, at the same time, authoritative (a balancing act many books of this sort do not achieve). The book addresses some emerging topics of diatoms, but I think a broader circle of international authors might bring some fresh perspectives and lesser-known but just as interesting examples to a broader readership, as new applications and research areas which use diatoms open up in these “interesting times."