Book reviewed by Mark A. Wilson

This is the book that will bring trace fossils to a new generation. It is the most diverse, most expansive, most creative text yet on ichnology. It integrates sedimentology, stratigraphy, paleobiology and paleoecology for a broad audience of Earth and life scientists, and does it in an eloquent and direct style. It is also lavishly illustrated, with almost every photograph and diagram in color. This book is now the go-to reference for the science and art of trace fossil study. 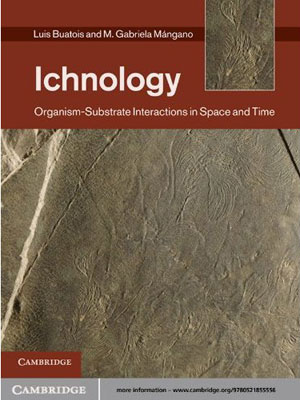 The first issue the authors address is, naturally, the question: what is ichnology? They start with a straightforward definition: it is "the study of traces produced by organisms (both animals and plants) on or within a substrate, and includes all issues related to bioturbation, bioerosion, and biodeposition." Ichnologists study both processes and the results of those processes, which are traces. Here is where the intellectual fun begins as they explore the boundaries of these concepts. Coprolites are trace fossils in this category (biodeposition) but eggs and egg cases are not. Biogenic structures preserved in plant tissues by arthropods are trace fossils; stromatolites are not. We've had qualification lists like this before, but the authors here discuss the philosophy of such classifications and openly embrace the shades of gray on their edges. The main point throughout the book is not just what these structures should be called, but what useful information we can recover from them.

The authors sort out early in the book ten "characteristics of trace fossils" that should be the outline of a lecture in every paleontology course. They are simple and familiar enough, but are presented here to introduce why trace fossils are important to geological and paleontological interpretations and cannot be confined to any one discipline. Trace fossils are evidence of behavior, for example, and one organism can produce more than one kind of trace fossil. (And more than one kind of organism can make the same trace fossil.) Novices in the field learn that even though trace fossils may sport Linnean binomial names, they are in an entirely different universe of classification. Ichnotaxonomy is covered here in a practical way with an emphasis on using ichnotaxa to convey consistent information within the science and through time.

The contentious issues of ichnofacies and ichnofabrics are well reviewed in the first part of this book, preparing readers for the detailed use of these concepts later. These approaches to the ichnological record should not be in competition, but are complementary because of the ways each includes taphonomy, tiering structure and environmental controls.

After conceptual tools and methods are in place, the second part of Ichnology covers "spatial trends", which are essentially environments and environmental controls. The most encyclopedic value for this portion of the book will be the catalog and description of trace fossils in marine and continental environments. Colorful and fully labeled block diagrams show what ichnological patterns to expect under which conditions, supplemented by generous color photographs from around the world. The authors have included numerous examples from cores, which is a further way to integrate ichnofabric and ichnofacies-type analyses. Case studies of ancient and modern traces are often described in boxes.

The last part of the book is devoted to the time value of ichnology. It begins with sequence stratigraphy, providing the best summary I've seen of the occurrence of traces fossils through various changing sea-level situations. (The color diagrams are certainly essential here.) There is a short section on trace fossils in biostratigraphy (emphasizing the Lower Paleozoic) and a longer portion on using trace fossils in evolutionary paleoecology, especially with the colonization of depositional environments and mass extinctions. The last chapter explores new uses of ichnology in paleoanthropology and archaeology.

As our online and electronic resources grow, there are fewer must-have books in our libraries than ever. Ichnology: Organism-substrate interactions in space and time is a book that all soft-rock geologists and paleontologists should have on their shelves. (Appropriately, there is also an electronic version we can load onto our computers and tablets for use in the field.) This book serves as an excellent reference, of course, but it is also a conceptual guide to the rich world of ichnology in our century.