The trace fossil Arachnostega in the Ordovician of Estonia (Baltica)

Arachnostega was probably a feeding trace (fodichnion), but the possibility that Arachnostega represents a dwelling burrow (domichnion) cannot be excluded with certainty (Fatka et al., 2011). The exact paleoecology of Arachnostega is not well understood.

During the Ordovician, Baltica migrated from a temperate climate to the tropics (Torsvik et al., 1992; Cocks and Torsvik, 2005). This climatic and corresponding sedimentological change is well recorded in the Middle to Late Ordovician carbonate rocks of northern Estonia (Nestor and Einasto, 1997). The relatively complete Ordovician (all stages are represented) section of north Estonia is rich in potential substrates (i.e., shells filled with sediment) for Arachnostega.

A large collection of Ordovician (Darriwilian to Hirnantian) gastropods (N=771) from northern Estonia (Figure 1) was systematically searched for the Arachnostega traces. In addition, a collection of gastropods (N=506), bivalves (N=106), cephalopods (N=70) and hyolithids (N=16) from the Aluvere Quarry (Sandbian) was systematically searched for these traces as well. Other faunal groups, such as trilobites and echinoderms, were also examined for Arachnostega traces. All the studied samples derive from limestone with various amounts of clay and bioclastic material. Echinoderm and trilobite fossils did not possess Arachnostega traces for unknown reasons.

All specimens were cleaned with water and brushes. The best preserved were photographed with a Nikon D7000 digital camera. Only the maximal diameters of each selected Arachnostega trace were measured on the photos digitally provided with a scale bar. Abundance data from the regional Keila Regional Stage (latest Sandbian to earliest Katian) were not included in the analyses of Arachnostega abundance for global stages (i.e., Darriwilian, Sandbian, Katian). In order to check the statistical differences in Arachnostega infestation rates between different substrates and different ages, a non-parametric Mann-Whitney test was used (result is significant if p < 0.05). All studied specimens are deposited at the Institute of Geology, Tallinn University of Technology (GIT) under collection numbers 251, 337, 334, 362, 399, 404, 694, 695, 696, and 697. 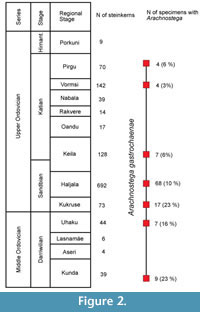 The most numerous records of Arachnostega in the Ordovician are from Gondwana and the Armorican Terrane Assemblage (Fatka et al., 2011). Slightly fewer records are from Kazakhstania and Baltica (Fatka et al., 2011). South American and African Gondwana and Armorican terrane assemblages were located in cold to temperate climatic zones during the Ordovician. It is possible that Arachnostega trace-makers preferred a cold climate, or the Arachnostega type of behavior was more successful in such climate regime. However, for steinkerns to be collectible they have to be separated from the matrix, and that requires particular rock types. Pure limestones and dolomites, for example, are unlikely to yield many free steinkerns, which biases the paleogeographic distribution away from certain regions, especially tropical settings far from a source of terrigenous sediment.

Arachnostega is known from several types of invertebrate steinkerns, such as those of trilobites (Fatka et al., 2011), bivalves, cephalopods, gastropods and hyolithids. The burrows were originally filled with the sediment or calcite cement, and their fillings were often later dissolved during the weathering. There are several factors that can influence the Arachnostega abundance in particular skeleton, such as accessibility of shell cavity, sediment texture, available space in the shell for the Arachnostega network, nutrient content of the sediment and availability of shells in the Arachnostega biotope. The data from the Aluvere Quarry indicate that Arachnostega was substrate shell selective (Table 1). The trace-makers clearly preferred bivalves (26%) over the gastropods (12%). Both gastropods and bivalves were abundant in the Aluvere Quarry community. It is possible that the more spacious bivalve shells contained more food than gastropod shells, or that feeding on their less curved inner surfaces was easier than in gastropod shells. In this case, Arachnostega trace-makers may have been able to choose the shells they inhabited and exploited. In the case of closed bivalve shells, the more protected microenvironment may have been more conducive for burrowing. Another possible explanation is that generally infaunal bivalves may have possibly contained more food (the carcass), which was preserved more or less in situ. In contrast, gastropod shells were more commonly reworked and only rarely contained the carcass.

Arachnostega has no obvious morphotypes associated with particular shell substrates. This indicates that substrates had no influence on the trace morphology. The morphology of Arachnostega traces shows no stratigraphic trends; both Darriwilian and Katian traces are similar. The same applies for the diameter of Arachnostega tubes that does not significantly change through the Ordovician (Table 3). However, the burrows with larger diameters tend to be slightly more common in the Darriwilian than in the Sandbian or Katian. Arachnostega traces in different substrates have relatively similar diameters, although traces in the cephalopods (N=9, Mean 0.9 mm, sd=0.36) tend to be larger than those in bivalves (N=11, Mean 0.40 mm, sd=0.12). This may indicate that the generally larger cephalopod shells were preferred by larger Arachnostega trace-makers (i.e., larger animals). Some specimens (Figure 3.5) have primary tunnels that are wider than their branches. It is possible that the burrowing animal used the primary tunnels mostly for changing locations and created the branches for searching the food.

Dynamics of Arachnostega Abundance in the Ordovician of Baltica

Arachnostega abundance decreased significantly during the Ordovician in Baltica. It is not possible to determine whether this decrease involves the-trace makers themselves (a particular taxon or taxa) or if it reflects a change in the preferred behavior of the trace-maker(s).

Climatic change. The change of Arachnostega abundance in Baltica correlates well with the regional climatic change that took place as the paleocontinent moved from the temperate climate zone to the tropics during the Middle and early Late Ordovician. This change may have played an important role in the decrease of Arachnostega abundance. The climatic change caused changes in the sedimentation environment such as faster sedimentation rates (based on thicker sections) and appearance of carbonate buildups and reefs (Nestor and Einasto, 1997). It is possible that Arachnostega may have preferred colder climates to tropical carbonate accumulation environments. The different and more abundant benthos in the tropics may have been among the direct causes behind the decrease of Arachnostega abundance. However, the possibility that the increased water temperature also affected Arachnostega cannot be ruled out.

GOBE. The change of Arachnostega abundance correlates well with the Great Ordovician Biodiversification Event (GOBE). Alternatively, or in addition to the regional climatic change, Arachnostega abundance may reflect the changes in marine communities that took place due to the GOBE, especially the appearance of new strategies of scavenging and predation. The GOBE may have affected Arachnostega via increased levels of bioturbation and possibly also the appearance of various new benthic predators. In modern marine environments, predation on rapidly reproducing invertebrates typically does not go so far as to wipe them out, but it may cause an adaptive change in behavior (Barnes and Hughes, 1999). If the decrease of Arachnostega abundance reflects the biotic changes caused by GOBE, it should be a global phenomenon and recognizable on other paleocontinents. Future studies should show whether the GOBE had an influence on the global abundance of Arachnostega in the Ordovician.

It is possible that Arachnostega trace-makers preferred a cold climate, or the Arachnostega type of behavior was more successful in such a climate regime.

The data from the Aluvere Quarry indicate that Arachnostega was substrate shell selective and clearly preferred bivalves (26%) over the gastropods (12%).

Arachnostega abundance decreased significantly during the Ordovician in Baltica possibly due to a climatic change from temperate to tropical. GOBE may have also influenced the abundance of Arachnostega. 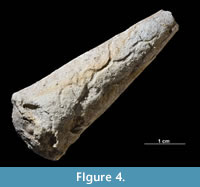 Description. Straight, curved or angular tunnels that form burrows or burrow systems on the surface or at partial contact with the surface of steinkerns of skeletal fossils (bivalves, gastropods, cephalopods, hyolithids). Most common simple forms are usually branching at an angle of 45-90°, but the branching patterns are variable. Less common are burrow systems that form irregular, polygonal meshes. The tunnels have rounded cross-sections. The diameters of burrows in each system vary on molds depending on how they are exposed on the steinkern. The largest systems can occupy the whole interior of the substrate shell. Arachnostega traces can occur in gastropods throughout their shell interiors.

We thank two anonymous reviewers for suggesting improvements to our submitted manuscript. O.V. is indebted to a Sepkoski Grant (Paleontological Society), the Palaeontological Association Research Grant program, Estonian Science Foundation grant ETF9064 and Estonian Research Council grant IUT20-34 for financial support. M.W. thanks the Faculty Development Fund at The College of Wooster. This paper is a contribution to IGCP 591 “The Early to Middle Paleozoic Revolution.”

Cocks, L.R.M. and Torsvik, T.H. 2005. Baltica from the late Precambrian to mid-Palaeozoic times: the gain and loss of a terranes identity. Earth-Science Reviews, 72:39-66.