Skull remains of Balaenoptera edeni from the Holocene (about 8800 to 4000 years before present; a transgressive period) of Osaka City, Japan, was previously identified as B. acutorostrata. Here, we describe in detail and reidentify it based on having a large alisphenoid, which contacts with the squamosal widely and a broader rostrum than the one of B. acutorostrata. The specimen adds a chronologically and geographically new record to the not well-known species. The specimen suggests that the modern distribution of the species probably had already established about 8800 to 4000 years ago, which was the age of the Jomon transgression creating the Kawachi Bay, the former condition of Osaka Plain. More remains of B. edeni will provide better resolution of their distributional history.

Copyright: October 2017 Society of Vertebrate Paleontology.
This is an open access article distributed under the terms of the Creative Commons Attribution License, which permits unrestricted use, distribution, and reproduction in any medium, provided the original author and source are credited.
creativecommons.org/licenses/by/4.0/

The Holocene had a transgressive period in Japan. Currently, the Osaka Plain is located east to the Osaka Bay, which is a part of the Seto Inland Sea. Several thousand years before, the Osaka Plain was dominated by the ocean. Its eastern part was named as the Kawachi Bay (Figure 1).

During 1960s, a series of huge land constructions had made for expansion of subway and highway systems, and also establishing buildings at the Osaka Plain. During that period, some whalebone remains were found from the sediments of the Kawachi Bay and Osaka Bay (Okazaki, 1975; Shindo, 1975; Taruno, 1984; Ogino, 1998). One of them, a skull (Osaka Museum of Natural History specimen, OMNH-QV4816; previously numbered as F2639) from the Osaka Plain was briefly described and identified as Balaenoptera acutorostrata based on measurement comparison with two juveniles and two adults of the species by Omura (1976).

Thanks to later skull morphological studies (Oishi, 1999; Wada et al., 2003; Oishi et al., 2009), identification of the Balaenopteridae has been improved. Here, we redescribe the skull with an unpublished rostrum part and identify its ontogeny and taxonomy. The OMNH-QV4816 adds a chronologically and geographically new record to a taxonomically confused whale species. 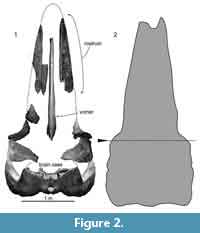 OMNH-QV4816 preserves the skull such as maxilla, premaxilla, vomer, frontal, parietal, pterygoid, squamosal, alisphenoid, presphenoid, basisphenoid, supraoccipital, exoccipital, and basioccipital (Figure 2). The skull was found as ventral side up at the locality without the mandibles. Regarding Omura (1976), the skull was broken transversely, when the specimen was transported from the locality. On the dorsal surface, a few fragments of rounded bivalve's shells are attached.

Diagnosis. OMNH-QV4816 is identified as Balaenoptera edeni based on having a large alisphenoid, which contacts with the squamosal widely (Oishi, 1999). B. brydei and B. omurai differ from B. edeni having a much smaller alisphenoid (Wada et al., 2003; Oishi et al., 2009). B. borealis differs from B. edeni and B. acutorostrata having the alisphenoid, which forms the medial part of the optic canal (Muller, 1954; Oishi, 1999).

Maxilla. The preserved maxillae are separated into rostral (1060 mm long) and orbital regions (181 mm long) (Figure 3). The rostral part shows more or less straight lateral margin with a posteriorly widen triangular anterior tip. On the dorsal side, dorsal infraorbital foramina open anteriorly as deep grooves. There is a weakly excavated and anteroposteriorly long area for the premaxilla on the medial surface. In ventral view, anteroposteriorly long and deep palatal foramina and sulci run between the median line and the palatal margin. The ventral side is excavated and shows at least three anteroposteriorly long palatal sulci. In the cross section, the rostrum part of the maxilla is medially high, laterally thin triangular. The medial margin of the maxilla (70 mm high) shows weakly excavated plain for the contact of the premaxilla.

Premaxilla. Only a part of left premaxilla is preserved (Figure 3). The preserved premaxilla is anteriorly weakly convex to dorsal and posteriorly narrow. Its posteromedial surface forms a vertical wall, which constitutes a part of the nasal fossa, which is a place for the depressor alae nasi (Mead and Fordyce, 2009; Buono et al., 2015; Marx et al., 2016). Thus, the preserved premaxilla probably is a middle portion. Ventrally, the premaxilla is excavated dorsally and forms a dorsolateral part of the mesorostral groove. Medial surface is anteriorly flat, but has anteroposteriorly long depression for the contact with the maxilla. 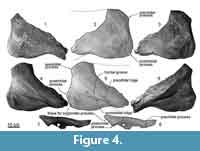 Vomer. The vomer is separated into a long rostral portion (1690 mm long) (Figure 3) and dorsoventrally thin posterior portion under the brain case (Figure 6). The anterior portion of the vomer is thinner than the posterior part, and dorsally opened U-shape in the cross section. Anterior part of the ventral surface is flat and exposes in ventral view between the maxillae. Posterior part of the rostral portion of the vomer is widened and shows several anteroposteriorly long grooves. 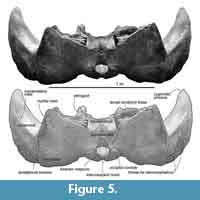 Parietal. The preserved posterior part of the parietal forms the posteromedial part of the temporal fossa, which is vertical and weakly excavated (Figure 9). The parietal contacts with the squamosal posteriorly, and the large alisphenoid ventrally.

A small exposure of the parietal locates lateral to the alisphenoid, anterior and medial to the squamosal. The parietal faces the fossa for the periotic medially. The part includes a few laterally excavated pits. 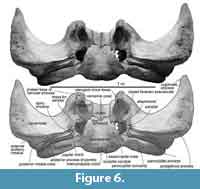 In ventral view (Figure 6), the squamosal has a low spiny process, which is the border for the periotic. The falciform process is absent. An almost closed foramen pseudovale locates lateral to the pterygoid sinus fossa, and is formed by the both squamosal and pterygoid. The almost closed foramen pseudovale is filled by an additional pterygoid bone, and is more or less closed. The mandibular fossa is flat and smooth. Posterior to the postglenoid process, the squamosal forms a ventrally widely opened external auditory meatus (27 mm long and 242 mm wide). The posterior part of the squamosal contacts to the long and anteroposteriorly short plate-like fused posterior processes of the periotic and bulla.

Pterygoid. The pterygoid locates medially to the squamosal. Anteriorly, the pterygoid has a broken base of the hamular process and its broken section shows laterally convex crescentic shape. The pterygoid has an anteroposteriorly long elliptical, huge, and shallow pterygoid sinus fossa (130 mm long and 85 mm wide). The fossa contains a few foramina. 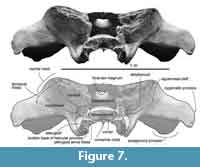 There is a ventral exposure of the alisphenoid, lateral to the pterygoid, posterior to the foramen pseudovale but is not contacted. Posteriorly, the alisphenoid forms an anterior border of the fossa for the periotic. 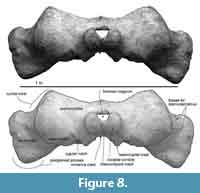 Confused Taxonomical History of Balaenoptera edeni and B. brydei, and Their Morphological Identifications 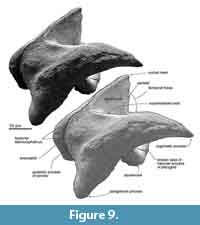 B. edeni and B. brydei have been thought as a species (Junge, 1950; Muller, 1954) or two species (Rice, 1998; Oishi, 1999). The confused taxonomical history of Balaenoptera edeni and B. brydei made difficulties when establishing their basic knowledge. Recent molecular phylogenies support independency of the three species; B. edeni, B. brydei, and B. borealis (Wada et al., 2003; Sasaki et al., 2006; McGowen et al., 2009), and these studies have been supported (Deméré et al., 2005).

Because of confused taxonomical history of B. edeni and B. brydei in the research history as above, Balaenoptera edeni distribution is not well known (Rice, 1998). Some literatures combine distribution of the two species into one. Kato et al. (1996) suggested that there are two stocks of “Bryde’s whales” around Japan (East China Sea stock and Western North Pacific stock). As Marine Mammal Stranding Database of the National Museum of Nature and Science (www.kahaku.go.jp/research/db/zoology/marmam/drift/index.php) shows, DNA examinations reveal that these stocks can be separated into the two species, B. edeni (equivalent to East China Sea stock) and B. brydei (equivalent to Western North Pacific stock). So, now so-called Bryde’s whale distribution is more certain with identifications using DNA analyses.

There are 13 B. edeni and three B. bridei DNA and/or skeleton records around Japan regarding the database (Table 2). Records of B. edeni are mainly in western Japan, and B. bryde’s records are in eastern Japan (see also Figure 10). Only four of 13 B. edeni have been recorded in the Seto Inland Sea, even the area has high density of human activities, which is related to opportunities of finding whales.

A New Data for Considering B. edeni’s Distribution

Osteological identification of the genus Balaenoptera has been discussed by several previous studies (Junge, 1950; Muller, 1954; Oishi, 1999; Wada et al., 2003; Oishi et al., 2009). Detailed osteological studies fixed confused Balaenoptera edeni and B. brydei identifications. For example, Oishi (1999) reported a feature of Balaenoptera edeni such as having a large alisphenoid, which contacts with the squamosal widely. Later, Wada et al. (2003) and Oishi et al. (2009) differentiated closely related B. brydei and B. omurai from B. edeni using a feature that alisphenoid size. Thus, the alisphenoid size and contacts to the other bones is a useful part to identify.

OMNH-QV4816 adds a chronologically and geographically new record to the species. No fossil B. edeni records have been reported by now (Deméré et al., 2005). Compare to the modern distribution of B. edeni, which distributes the East China Sea and off Kochi, the record of OMNH-QV4816 from Osaka suggests that the modern distribution probably had already established about 8800 to 4000 years before. More remains of B. edeni, which are morphologically diagnosable specimens, will provide better resolution of their distribution in the past.

The remains of the Balaenoptera edeni skull from the Holocene (about 8800 to 4000 years before) of Osaka City, Japan, was previously identified as B. acutrostrata. Here, we revise it as above based on the alisphenoid and rostrum morphology. The specimen adds a chronologically and geographically new record to the not well-known species as that the modern distribution probably had already established about 8800 to 4000 years ago, which was the age of the Jomon transgression creating the Kawachi Bay.

We thank C. Cho (Osaka City Cultural Properties Association), T. Nakajo, and Y, Ishii (OMNH) for discussion on geology; M. Tsukagoshi (OMMH) for discussion on paleontology and helping with the handling of the specimen; S. Ishida (OMNH) for an identification on the remains of invertebrates. We thank to referees, T.A. Deméré (San Diego Natural History Museum), T.K. Yamada, and C.-H. Tsai (both NSMT). Thanks go to T.K. Yamada (NSMT) for giving information about the research history of Balaenoptera omurai, B. edeni and B. brydei, and M. Oishi (Iwate Prefectural Museum, Tohoku University Museum) for discussion about referred materials. We thank to M. Ohara and Y. Kaji (both WMNH), Y. Tajima, and T.K. Yamada (both NSMT) and T. Wada (OMNH) for their permission to examine comparative materials.

Deméré, T.A., Berta, A., and McGowen, M.R. 2005. The taxonomic and evolutionary history of fossil and modern balaenopteroid mysticetes. Journal of Mammalian Evolution, 12:99-143.

Geisler, J.H. and Luo, Z. 1996. The petrosal and inner ear of Herpetocetus sp.(Mammalia: Cetacea) and their implications for the phylogeny and hearing of archaic mysticetes. Journal of Paleontology, 70:1045-1066.

Kajiyama H. and Itihara M. 1972. The developmental history of the Osaka Plain with references to the radio-carbon dates. Memoirs of the Geological Society of Japan, 7:101-112. (In Japanese)

Kasuya, T. 1973. Systematic consideration of recent toothed whales based on the morphology of tympano-periotic bone. Scientific Reports of the Whales Research Institute, Tokyo, 25:1-103.

Mitamura, M., and Hashimoto, M. 2004. Spatial distribution with the drilling database on the basal gravel bed of the Namba formation in the Osaka plain, southwest Japan. The Quaternary Research (Daiyonki-Kenkyu), 43:253-264.

Muller, J. 1954. Observations on the orbital region of the skull of the Mystacoceti. Zoologische Mededelingen, 32:279-290.

Oishi, M. 1999. Comparison of the cranial elements around the subtemporal fossae of balaenopterid whales. Japan Cetology, 9:41-48.

Tanabe, S., Nakashima, R., Uchida, M., and Shibata, Y. 2012. Depositional process of an estuary mouth shoal identified in the alluvium of the Tokyo Lowland along the Tokyo Bay, central Japan. Journal of Geological Society of Japan (Chishitsugakuzassi), 118:1-19. (In Japanese with English abstract)