In the last decades, our knowledge of ziphiid evolution has increased dramatically. However, their periotic morphology is still poorly known. A fossil ziphiid (TTM-1) including the periotic, bulla, isolated polydont teeth and vertebrae from the Chepotsunai Formation (latest Miocene) of Tomamae Town, Hokkaido, Japan, is identified as a member of a clade with crown ziphiids of Bianucci et al. (2016) by having three periotic synapomorphies; a posteriorly wide posterior process, transversely thick anterior process, and laterally elongated lateral process. The specimen adds morphological information of the periotic. Among the Ziphiidae from the stem to crown, the periotic morphologies were changed to having a more robust anterior process, wider anterior bullar facet and posterior process. The crown Ziphiidae shares a feature; enlarged medial tubercle on the anterior process. Among the crown Ziphiidae, TTM-1 does not have a swollen medial tubercle not like Tasmacetus, Nazcacetus and others. This new morphological information might represent useful future phylogenetic comparisons.

This is an open access article distributed under the terms of the Creative Commons Attribution License, which permits unrestricted use, distribution, and reproduction in any medium, provided the original author and source are credited.

A fossil ziphiid including fragmentary skull, periotic, bulla, vertebrae and isolated teeth from the latest Miocene of Hokkaido, Japan, was originally reported by Kimura (1997) and was implied to have a close relationships with Tasmacetus based on having polydont dentition. Later, Kimura (2003) mentioned that the specimen and Tasmacetus differ in the shape of the cross section of the teeth as oval and conical, respectively. Ichishima (2005) stated that polydont dentition might be a plesiomorphy for the Ziphiidae.

Here, we re-describe the polydont fossil ziphiid from the latest Miocene of Japan and discuss periotic morphological changes among the family. The specimen allows description of the relatively rare periotic and tympanic bulla within the Ziphiidae.

The original horizon of TTM-1 is the Chepotsunai Formation as Kimura (1997) mentioned. Regarding Kimura (1997), the locality had about 8 m thickness of massive sand stone. The fossil was found from 2 m height at the outcrop. Upper to the horizon of the fossil, 6 m thickness of unconformity sandy mud stone sediments laid. The ear bones and teeth were deposited around the skull in about 60 cm cube. Lithology of the matrix from the skull is light gray fine sand but is not nodule. The matrices of TTM-1 on teeth show small dark green grains, which are probably glauconite. The diatom assemblage of TTM-1 (see Table 1) is assigned as NPD 7Ba (6.5-5.6 Ma; the latest Miocene, Messinian) of Yanagisawa and Akiba (1998), based on the occurrence of Neodenticula kamtschatica and absence of Neodenticula koizumii and Shionodiscus oestrupi. The assignment is supported by the presence of Thalassiosira temperei and absence of Rouxia californica.

Diagnosis. TTM-1 can be identified as a ziphiid, based on the presence of a poorly individualized dorsal keel on the posterior process of the periotic as character 41 in Bianucci et al. (2016).

Ontogeny. All three preserved vertebrae show unfused epiphyses to the bodies. Based on these observations, TTM-1 is a juvenile to subadult.

Skull. A flat, squashed and fragmentary huge bone (Figure 2) does not show clear morphological information. A side of the skull is stuck by plaster jacket to protect the specimen. There is a huge flat area on the left side of Figure 2, which might be the supraoccipital. On the right side, there is a bone with thin layers, which might be a part of the rostrum. If this identification was correct, the skull is about 86+ cm long and 30+ cm wide. 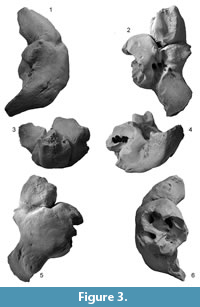 The pars cochlearis is anteroposteriorly longer than the anterior process, and is broken laterally. The anteromedial surface of the pars cochlearis has a weak depression, which is a part of the median promontorial groove. 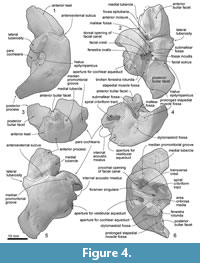 The broken internal acoustic meatus reveals the spiral cribriform tract anteriorly and area cribrosa media posteriorly. The proximal opening of the facial canal is large and possesses anteroposteriorly long elliptical shape (3.5 and 1.5 mm diameter). The foramen singulare is very tiny (about 0.1 mm diameter) and located very deep at ventral to the transverse crest. The aperture for cochlear aqueduct is large and circular (about 3.0 mm diameter). The preserved lateral margin of the fenestra rotunda implies that the size of the foramen is 3 mm diameter or slightly larger.

On the body of the periotic in ventral view, the mallear fossa is clear and mediolaterally wide elliptical shape (4.3 mm long and 5.5 mm wide), but shallower than the condition of the modern ziphiids. The mallear fossa is anterolaterally restricted by a sigmoidal ridge, which continues to the lateral tuberosity. 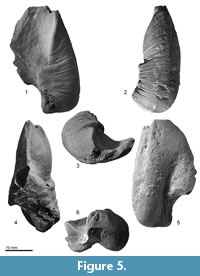 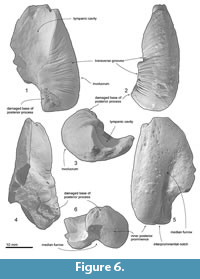 Teeth. TTM-1 is polydont and near-homodont (Figure 7, Table 3). Sixteen isolated single-rooted teeth are preserved. The original orientation of the teeth is determined based on preserved teeth of the fossil ziphiids such as Ninoziphius platyrostris and Chavinziphius maxillocristatus (Bianucci et al., 2010; Lambert et al., 2013; 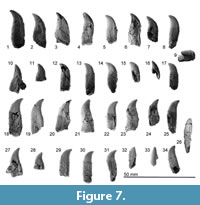 Four larger teeth (Figure 7.1-4) are about 26-23 mm in total apicobasal length, with a crown height of 12-10 mm. These teeth have a wide root. Based on the root shape and size, they are posterior teeth. Twelve smaller teeth (Figure 7.5-8 and 7.10-17) are 19 mm or smaller in total dimension. The crown heights are about 9-8 mm. These smaller crowns have a weaker degree of curvature than the larger teeth. This is especially evident in the smallest teeth (Figure 7.12-17), which possess anteroposteriorly shorter roots, circular in cross sections.

Vertebrae. Only bodies of three vertebrae are preserved (Figure 8). They are slightly anteroposteriorly longer than the transverse width (Vertebra number A is 50 mm long, 60 mm wide. Vertebra number B is 82 mm long, 75 mm wide). These preserved vertebrae possess unfused epiphyses.

Periotic Morphology and Transition among the Ziphiidae

TTM-1 from the Chepotsunai Formation (latest Miocene) of Tomamae Town, Hokkaido, Japan, (including the periotic, bulla, isolated teeth and vertebrae) is identified as a member of a clade with crown ziphiids of Bianucci et al. (2016) by three periotic synapomorphies, such as having a posteriorly widen posterior process, transversely thick anterior process and laterally elongated lateral process. TTM-1 is polydont and its teeth are similar to those of Ziphirostrum marginatum of the extinct Messapicetus clade. TTM-1 adds periotic morphology among the Ziphiidae. From the stem to crown, the periotic morphologies seem to be changed to more robust anterior process, wider anterior bullar facet and posterior process. The crown Ziphiidae of Bianucci et al. (2016) including TTM-1 share a feature; enlarged medial tubercle on the anterior process. TTM-1 does not have a swollen lateral side of the anterior process, not like Tasmacetus, Nazcacetus and others. These features might be used for phylogenetic analysis. The proportions of the anterior process and posterior process of a baleen whale group, the Balaenopteridae are known as parts showing ontogenetic variation (Bisconti, 2001). Examined modern ziphiids in this study are not really known for their ontogenetic stages. However, a supposed not fully adult individual of Mesoplodon grayi (OU no number) with an opened mesorostral groove also shows robust anterior and posterior processes. More data, especially ontogenetic variation among the Ziphiidae periotics is required.

We thank H. Fukuoka, who collected the specimen; Tomamae Educational Board for providing opportunities to study the specimen; H. Furusawa and M. Yamazaki (SMAC) for giving access to comparative materials. We also thank two anonymous reviewers for providing constructive comments on this manuscript.

Flower, W.H. 1867. Description of the skeleton of Inia geoffrensis and the skull of Pontoporia blainvillii, with remarks on the systematic position of these animals in the Order Cetacea. Transactions of the Zoological Society of London, 6(3):87-116.

Gray, J.E. 1850. Catalogue of the Specimens of Mammalia in the Collection of the British Museum. Part 1 - Cetacea. British Museum, London.

Ichishima, H. 2005. A re-evaluation of some Japanese cetacean fossils. Memoir of the Fukui Prefectural Dinosaur Museum, 4:1-20.

Kasuya, T. 1973. Systematic consideration of recent toothed whales based on the morphology of tympano-periotic bone. Scientific Reports of the Whales Research Institute, Tokyo, 25:1-103.

Ramassamy, B. 2016. Description of a new long-snouted beaked whale from the Late Miocene of Denmark: Evolution of suction feeding and sexual dimorphism in the Ziphiidae (Cetacea: Odontoceti). Zoological Journal of the Linnean Society, 178(2):381-409. https://doi.org/10.1111/zoj.12418

Yanagisawa, Y. and Akiba, F. 1998. Refined Neogene diatom biostratigraphy for the northwest Pacific around Japan, with an introduction of code numbers for selected diatom biohorizons. Journal of Geological Society of Japan, 104:395-414. https://doi.org/10.5575/geosoc.104.395