Comment on supposed holothurian body fossils from the middle Ordovician of Wales (Botting and Muir, Palaeontologia Electronica: 15.1.9A)

Light and SEM study of body fossils from the Middle Ordovician of Wales recently described as the oldest articulated holothurians by Botting and Muir (Palaeontologia Electronica Article number: 15.1.9A) finds no traits that allow them to be assigned to the Echinodermata.

In a recent paper describing a middle Ordovician (Darriwilian) fauna from Wales, Botting and Muir (2012) assigned some vase-shaped fossils to the echinoderm class Holothuroidea, establishing a new genus and species, Oesolcucumaria eostre. While isolated skeletal elements of holothurians first appear at about this time (Reich, 1999, 2001) the fossil record of articulated holothurians is extremely sparse (Smith and Gallemí, 1991; Gilliland, 1993; Reich, 2010a, in press). So this discovery, if correct, has some importance: as the oldest articulated holothurians ever recorded, they could potentially provide critical evidence about the morphology of the earliest members of this class. Oesolcucumaria was described as having a multiplated calcareous ring, skeletalized ambulacra, and cruciform dermal sclerites, though these last elements were illustrated only sketchily in the paper. The descriptions were based on light microscopic study of the original fossils preserved as moulds. 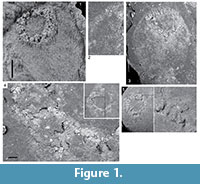 We studied the type material (NHM EE.8734, 8736-8739; Figure 1) using low-angle light microscopy but could find no traits that indicate this material has echinoderm affinities. We therefore cast two of the specimens and examined them under light and scanning electron microscopy in order to clarify aspects of its morphology. It is standard practice when studying echinoderms preserved as moulds to cast them in latex, as this is by far the best way to reveal details of plating. This is how other early Palaeozoic holothurian mouldic body fossils have been studied by previous authors (i.e., Haude, 1995b; Jell, 2011) and it is latex casts that are illustrated and described in those papers. While it is usual to remove iron oxides from specimens prior to latexing, as the iron oxide fill can obscure details, in this case the specimen was left untreated because of its delicate state of preservation. The latexes were examined under SEM because only at this level of resolution do the details of ossicle microstructure become evident.

No such elements were found in Oesolcucumaria. Elements in the body wall in Oesolcucumaria are sparse and difficult to make out under SEM but appear to be very fine, simple, solid, acicular rods or crosses (Figure 1.2), like those found in many Palaeozoic sponges (e.g., Rigby and Gutschick, 1976; Rigby and Toomey, 1978; Schallreuter, 1991; Kozur et al., 1996; Maletz and Reich, 1997; Mehl and Lehnert, 1997; Botting, 2003, 2004; Botting and Muir, 2011). Rod-like and/or cruciform elements do occur in holothurians (Figure 2.2-10) but these are never simple acicular and show branched or perforated flattened or even spinose tips (Figure 2.1, 2.11-12).

A synapomorphy uniting all holothurians is the presence of a ring of large skeletal elements surrounding the pharynx (Figure 3). This calcareous ring acts as an anchor for the anterior section of the water vascular system including the buccal tentacles and also for the longitudinal and (if present) retractor muscles. The ring is composed of 10 cylindrical elements that abut and are arranged with pentaradial symmetry – five radial elements (R) alternating with five interradial elements (IR). This structure is clearly and unambiguously seen in Palaeozoic holothurian body fossils, such as the Silurian Porosothyone (Jell, 2011), the Devonian Andenothyone (Haude, 1995b), Nudicorona (Haude, 1995a, 1997), and gen. et sp. nov. (Hunsrück Slate, Bartels et al., 1998). In the Carboniferous Mazon Creek Lagerstätte, an undescribed apodid holothurian preserves in addition the digestive tract, which is encircled by the circumoral ring at its oral end (Reich and Stegemann, 2010; Figure 3.1). Elements of this ring structure have a distinctive, highly structured morphology and, when viewed under SEM, show always the characteristic stereom microstructure 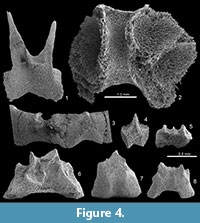 (Figure 4), and this is the case even for isolated ring elements from Ordovician and Silurian deposits (e.g., Reich, 1999; Figure 4.5-8). Oesolcucumaria, by contrast, has a large opening with a thickened lip (Figure 1.1, 1.3-5), similar to small hexactinellid sponges figured by Botting et al. (2011, fig. 2G-J). This structure consists of a random, irregular pattern of ridges and sediment-filled pits showing no pentaradial symmetry (Figure 1.4). High-resolution images of this region show a fine granular texture (Figure 1.5) and no trace of stereom could be found anywhere. The style of preservation in Oesolcucumaria contrasts with that seen in definitive echinoderms from this horizon where plates preserve traces of a stereom meshwork (see the illustration of the mitrate carpoid Anatifopsis? in Botting and Muir, 2012, fig. 5.1).

Botting and Muir (2012, p. 21) suggested Oesolcucumaria was related to modern Apodida, based on the presence of 'multiple internodals' (a term which is applicable in crinoids, but not in holothurians) in its multi-plated ring. Palaeozoic holothurians, however, accommodated additional tentacles by adding anterior processes to their 10 ring elements, not by adding additional plates. Modern holothurians in which the total number of calcareous ring elements has been increased to accommodate extra tentacles do occur, but most only in advanced Synaptidae in Cenozoic times and always retain clearly differentiated radial and interradial elements.

Two additional points are worth noting. Despite preservation of the soft tissue body outline, there is no trace of a digestive tract preserved, and the presence of differentiation of 'ambulacral zones' reported in the original description simply cannot be confirmed. The latter assumption of the authors (Botting and Muir, 2012, p. 21-22) is mainly based on a misinterpretation of the stone canal of Palaeocucumaria (Devonian Hunsrück Slate, Germany) in X-radiographs by Haude (1994, 1995a, 2002) and others (Reich and Smith, pers. obs.).

Bold claims need strong evidence. Without evidence for stereom, pentaradial symmetry, diagnostic body wall spiculation or an organized calcareous ring there is no case for assigning Oesolcucumaria to the class Holothuroidea or indeed to the phylum Echinodermata. The fine and delicate cruciform and bipolar acicular needles in the body and a single large circular opening with a strengthened rim seem more indicative of poriferan affinities, though stronger evidence is clearly needed to resolve its true taxonomic affinities.

MR is grateful to Jean-Bernard Caron (ROM), Hans Hagdorn (MHI), David Rudkin (ROM), Sabine Stöhr (SMNH) and Janet Waddington (ROM), who provided assistance during visits and the loan of fossil and recent holothurian material. MR also acknowledges the financial support of the projects SE-TAF-799 and GB-TAF-2446 by SYNTHESYS (http://www.synthesys.info/), a programme that is financed by European Community Research Infrastructure Action, as well as (in part) by the German Research Foundation (RE 2599/4-1). SZ is funded by a Post Doctoral grant (EX2009-0815) and projects CGL2012-39471 and CGL2011-24516 from the Spanish Ministry of Economy and Competitiveness.

Reich, M. in press. How many species of fossil holothurians are there ? In Johnson, C. (ed.) Echinoderms in a Changing World. Proceedings of the 13th International Echinoderm Conference, January 5-9 2009, University of Tasmania, Hobart Tasmania, Australia. Taylor & Francis Group, London etc.

Rigby, J.K. and Toomey, D.F. 1978. A distinctive sponge spicule assemblage from organic buildups in the Lower Ordovician of southern Oklahoma. Journal of Paleontology, 52:501-506.