Injured trilobites in the TMP

Injured trilobites within a collection of dinosaurs: Using the Royal Tyrrell Museum of Palaeontology to document Cambrian predation

Biomineralised exoskeletons of trilobites are ideal for recording abnormalities, documenting injuries from failed attacks, and understanding predation in the fossil record. The illustration of new injured Cambrian-aged trilobites is particularly important for elucidating aspects of early Paleozoic predator-prey systems and identifying groups that were targets of this early predation. We document six new abnormal trilobite specimens from the Royal Tyrrell Museum of Palaeontology, including the first evidence for injuries on the corynexochid trilobite Hemirhodon amplipyge. These new data highlight the importance of museum collections in uncovering unique and informative specimens for studies of predation on early animals.

Copyright: July 2020 Palaeontological Association.
This is an open access article distributed under the terms of Attribution-NonCommercial-ShareAlike 4.0 International (CC BY-NC-SA 4.0), which permits users to copy and redistribute the material in any medium or format, provided it is not used for commercial purposes and the original author and source are credited, with indications if any changes are made.
creativecommons.org/licenses/by-nc-sa/4.0/

Trilobites were an exceptionally diverse group of Paleozoic arthropods, with over 22,000 species, that are characterised primarily by their biomineralised dorsal exoskeletons; a feature that resulted in a high preservational protentional (Webster, 2007; Paterson, 2019). These exoskeletons also preserve an unprecedented record of abnormal features, which can be attributed to injuries, developmental aberrations, diseases, and parasites (Owen, 1985; Babcock, 1993, 2003, 2007; Bicknell and Paterson, 2018; Vinn, 2018; Bicknell and Pates, 2020). The Cambrian origin of trilobites, and presence of such specimens with abnormalities, have made the group central to understanding the rise of predation (Babcock and Robison, 1989; Babcock, 1993; Pates et al., 2017; Pates and Bicknell, 2019). Curiously, abnormalities on Cambrian-aged trilobites have been documented more than any other time-period, which may reflect a higher intensity of research on injuries from this time period, a prevalence of material, and/or a true biological signal (Pates et al., 2017; Bicknell and Paterson, 2018). Regardless, new abnormal specimens provide key information for developing our knowledge of predation, moulting complications, and pathological developments (Owen, 1985; Bicknell and Pates, 2020). Under-explored museum collections are ideal for identifying important specimens, as they often house new examples of abnormal specimens, often from new localities (Bicknell and Pates, 2019, 2020). Museum collections have also been used to identify abnormality stereotypy (Babcock and Robison, 1989; Babcock, 1993).

Canada’s rich fossil record has been on show at the Royal Tyrrell Museum of Palaeontology, Drumheller, Alberta (TMP) for over 30 years, and this has made the museum one of the central hubs of Canadian palaeontological research. This museum, and associated research output, is most famous for its extensive vertebrate collection, particularly the remains of Late Cretaceous dinosaurs from Alberta (e.g., Ryan and Evans, 2005; Eberth et al., 2013). As such, there are thousands of specimens housed at the TMP that have greatly increased knowledge of extinct vertebrates (Currie and Koppelhus, 2015). Despite the primary focus on dinosaur and other vertebrate groups, the TMP collection also houses an array of invertebrate taxa (Motz et al., 2001). To expand the use of this diverse collection, and to align with recent research documenting Cambrian predation (Fatka et al., 2015; Pates et al., 2017; Bicknell et al., 2018c; Bicknell and Pates, 2019; Klompmaker et al., 2019; Pates and Bicknell, 2019), Cambrian-aged fossils were reviewed for abnormal trilobite specimens. We present six new examples of abnormal trilobites, representing the taxa Gabriellus kierorum , Ogygopsis klotzi , Modocia typicalis , and the first record of an abnormal Hemirhodon amplipyge . This highlights the importance of mining museum collections to increase our knowledge of abnormal and predated animals throughout the Phanerozoic. 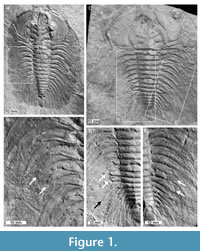 Two Gabriellus kierorum specimens were identified with abnormalities. TMP.1983.021.0034 is preserved as a complete dorsal exoskeleton (82 mm long) with an abnormality in the centre of the left pleural lobe (Figure 1A, B). The pleurae of thoracic segments 5 and 6 are truncated by ~15 mm relative to the other pleurae on the specimen. The pleurae on these segments are show minute tips, indicating a degree of regeneration (Pates et al., 2017).

TMP.1983.021.0039 is preserved as a complete dorsal exoskeleton (55 mm long) with abnormalities on the posterior sections of the left and right pleural lobes (Figure 1C). Pleural spines on the 7th-9th thoracic segments of the left pleural lobe are truncated. The 7th and 8th spines are truncated by 13 mm relative to undamaged spines, have rounded edges, and appear to be slightly cicatrised (white arrows, Figure 1D). The 9th segment shows some degree of spine recovery and is ~50% the length of undamaged spines (black arrow, Figure 1B). On the right pleural lobe, the pleural spines on the 7th and 8th thoracic segments are truncated by ~11 mm relative to other spines and partly fused together (Figure 1E). This has produced a ‘V’-shaped indentation. There is no evidence of cicatrisation or regrowth along the margin of this abnormality. 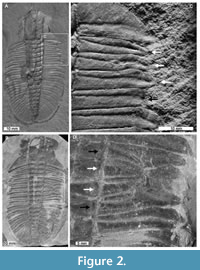 TMP1983.142.0002 is 73 mm long with an abnormality on the anterior section of the right pleural lobe (Figure 2A). The pleurae of thoracic segments 1-4 are truncated by 2 mm relative to other segments (Figure 2C). Segments 1-3 form an ‘L’-shaped injury that shows limited thoracic recovery (these segments are ~75% the length of undamaged sections) and does not show evidence of cicatrisation. Further, the 4th segment is more truncated than segments 1-3 (2.5 mm). The margin of this abnormality is not obviously cicatrised. The degree of indentation suggests that this abnormality likely occurred more recently than the more anterior segments.

TMP1983.257.0001 is 101 mm long and has an abnormality on the centre of the right pleural lobe that affects thoracic segments 4-7 (Figure 2B). Segments 5 and 6 are pinched together and segments 4 and 7 are warped about this point (Figure 2D). There is no evidence of cicatrisation along the margin of this abnormality. 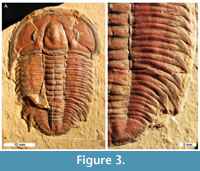 TMP 1984.50.0004 is preserved as a complete dorsal exoskeleton (40 mm long) with an abnormality on the posterior part of the right pleural lobe. The hypertrophied pleural spine on the 11th thoracic segment is truncated by 4 mm relative to the same spine on the left side. This truncation forms a single segment injury (SSI, sensu Bicknell and Pates, 2020) that is slightly rounded and shows evidence of cicatrisation along the margin.

TMP.2006.036.0102 is preserved as a complete dorsal exoskeleton (87 mm long) with an abnormality on the anterior section of the left side of the pygidium. The abnormality truncates the pygidial margin by 3.9 mm. The abnormality is expressed as a shallow “W”-shape indentation next to a more posterior, deeper, and acuate “V”-shape (white and black arrows, respectively, in Figure 4B). The margin of the abnormality is cicatrised. 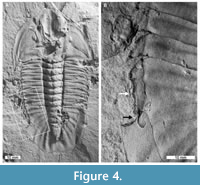 The abnormalities considered here are morphologically similar to examples that have been attributed to injuries (Šnajdr, 1978; Owen, 1985; Bicknell and Paterson, 2018; Bicknell and Pates, 2020). These abnormal specimens are therefore interpreted either as individuals that experienced failed predation, or individuals who injured themselves as a result of a moulting complication or other behaviour (Owen, 1985). The cicatrised abnormality observed on the Ogygopsis klotzi specimen TMP1983.142.0002 (Figure 2A, C) is morphologically similar other O. klotzi injuries that were attributed to failed attacks (Table 1). Further, the ‘W’-shaped morphology and cicatrisation of the injury to the Hemirhodon amplipyge specimen is comparable to other injuries, suggestive of at least one failed attack (Figure 4). One of the most curious specimens examined here is the Ogygopsis klotzi specimen TMP1983.257.0001 (Figure 2B, D) that has warped thoracic segments; an abnormality previously unknown in this group, but has been reported in other trilobite taxa (Šnajdr, 1955). The disruption of these segments may reflect an injury from moulting, deformation during a soft-shelled stage, or potentially a developmental issue. It seems unlikely that O. klotzi experienced complications from moulting as the taxon lacks large pleural spines (Conway Morris and Jenkins, 1985). We therefore suggest that the individual either experienced an injury during a soft-shelled stage that deformed the exoskeleton, or the exoskeleton developed incorrectly.

Evidence for predators that targeted trilobites reiterates the question that has been considered since at least Öpik (1961), Alpert and Moore (1975), and Rudkin (1979): what was predating on Cambrian trilobites? The most likely predators are those trilobites and predatory artiopodans that displayed reinforced gnathobasic spines on protopodal sections of the walking legs, ideal for durophagy, similar to the extant horseshoe crabs (Bruton, 1981; Conway Morris and Jenkins, 1985; Zacaï et al., 2016; Bicknell et al., 2018a, b, 2019; Holmes et al., 2020). Radiodont groups, such as anomalocaridids, may have been capable of attacking those trilobites in a non-biomineralised state using fortified frontal appendages to grab and break prey, perhaps in conjunction with the radial mouthpart (Nedin, 1999; Daley et al., 2013; Bicknell and Paterson, 2018). However, doubt has been cast on shell-crushing ability of mouthparts (Whittington and Briggs, 1985; Hagadorn, 2009; Hagadorn et al., 2010; Daley and Bergström, 2012). Recent studies of other radiodont groups has highlighted the presence of taxa with gnathobasic-like structures on frontal appendages, which may have also been in used in predation (Cong et al., 2017, 2018). While such morphologies are not known from North American deposits, related taxa are known from the Stage 4 Kinzers Formation and Latham Shale (USA), Wuliuan Burgess Shale (Canada), and Drumian Wheeler Formation (Daley and Budd, 2010; Pates and Daley, 2019; Pates et al., 2019; Lerosey-Aubril et al., 2020). Finally, the raptorial frontal appendages of stem chelicerate Yohoia tenuis Walcott, 1912, may have functioned like a hammer and been capable of breaking biomineralised exoskeletons, in a manner comparable to stomatopods (Pratt, 1998; Haug et al., 2012; Bicknell and Paterson, 2018).

Examination of palaeontological collections that focus primarily on one part of the tree of life often permits the identification of novel palaeoecological data. The Royal Tyrrell Museum of Palaeontology represents a particularly interesting example of this situation; although the museum focuses chiefly on vertebrate research, there is an expansive collection of invertebrate material. We have shown here that examining the arthropod section of the collection has uncovered previously unknown information on Cambrian trilobites. Another part of the invertebrate collection that would undoubtedly lend itself to key research is the molluscan material. Examining this section of the TMP would uncover new trends in predator-prey interactions involving this group across the Mesozoic and could potentially be extended to consider further Palaeozoic palaeoecological systems.

This research was supported by funding from a Australian Research Council Discovery Project (DP200102005), UNE Postdoctoral Research Fellowship (to RDCB) and a Research Training Program Scholarship (to BH). We thank Brandon Strilisky for access to the TMP collection, James Gardner, and Rebecca Sanchez for help with the TMP collection, and the Royal Tyrrell Museum Cooperating Society for supporting the visitation. We thank Bruce Lieberman for clarifying the taxonomic placement of Gabriellus kierorum . We also thank Stephen Pates for his comments on an earlier draft that thoroughly improved the text. Finally, we thank the James D. Holmes and an anonymous referee for their insightful comments that improved the flow and focus of the text.

Bicknell, R.D.C. and Paterson, J.R. 2018. Reappraising the early evidence of durophagy and drilling predation in the fossil record: implications for escalation and the Cambrian Explosion. Biological Reviews, 93:754-784. https://doi.org/10.1111/brv.12365

Currie, P.J. and Koppelhus, E.B. 2015. The significance of the theropod collections of the Royal Tyrrell Museum of Palaeontology to our understanding of Late Cretaceous theropod diversity. Canadian Journal of Earth Sciences, 52:620-629. https://doi.org/10.1139/cjes-2014-0173

Öpik, A.A. 1961. The geology and palaeontology of the headwaters of the Burke River, Queensland 53. Bureau of Mineral Resources, Geology and Geophysics, Commonwealth of Australia.