The Guanshan Biota is a typical Burgess Shale-type Cambrian-aged Lagerstätte with diverse trilobites. As such, the taxonomy of trilobites from the Guanshan Biota, especially the palaeolenid group, has been the focus of research over the last decade. To develop this research, we present a geometric morphometric analysis of cranidial shape in 60 specimens from three sections of the Guanshan Biota from the Wulongqing Formation (Cambrian Series 2, Stage 4), Yunnan Province, South China. We show that cranidia of Megapalaeolenus deprati and Palaeolenus douvillei occupy distinct regions of morphospaces and that P. douvillei and P. “lantenoisi” occupy the same region of morphospace. Combined with qualitative observation on the thorax, P. “lantenoisi” is here considered a junior synonym of P. douvillei. Megapalaeolenus deprati is still considered valid and is distinguished from P. douvillei by its rounded glabella, longer palpebral lobes, shorter ocular ridges, and more developed posterolateral projections. Its pleural spines are more curved, and pleural lobes are markedly wider than P. douvillei. These results highlight that the supposed diversity of palaeolenid taxa in lower Cambrian deposits need reconsideration, potentially using similar morphometric methods.

Copyright: May 2020 Paleontological Society.
This is an open access article distributed under the terms of Attribution-NonCommercial-ShareAlike 4.0 International (CC BY-NC-SA 4.0), which permits users to copy and redistribute the material in any medium or format, provided it is not used for commercial purposes and the original author and source are credited, with indications if any changes are made.
creativecommons.org/licenses/by-nc-sa/4.0/

Trilobite species are traditionally erected with qualitative description and observation: an approach which is informative but sometimes might be unable to derive whether specimens represent morphological extremes of one taxon or are indeed another species. This is especially the case for Cambrian trilobites that exhibit high levels of intraspecific variation that reflect taphonomic alterations, spatially segregated localities, time averaging, and ontogeny (Hughes, 1991, 1994; Webster, 2007; Esteve et al., 2017). Palaeolenids from the Guanshan Biota (Cambrian Stage 4, Series 2, Yunnan Province, South China) are one group with a complicated taxonomic history due to inter- and intra-specific variation (Table 1).

Studies over the last 20 years have considered whether Megapalaeolenus deprati and Palaeolenus douvillei were conspecific (Lin and Peng, 2004, 2009, 2016; Luo et al., 2007, 2014; Hu et al., 2013; Lin, 2014) using qualitative observation and traditional morphometric analyses of cranidial shapes. The validity of the genera has caused complications as the Wulongqing Formation, which contains the Guanshan Biota, was traditionally divided into two trilobite zones: the lower Palaeolenus Zone and the upper Megapalaeolenus Zone (Luo et al., 2008; Hu et al., 2013, 2017), and these zones have been considered uninformative in the light of possible synonymy of the genera (Lin and Peng, 2004, 2009, 2016). It is, therefore, imperative to ascertain if the two genera are synonymous. Further complications are present within the palaeolenids of the Guanshan Biota as the validity of P. douvillei and P. “lantenoisi” has been debated: authors have suggested that they were unable to confidently differentiate P. “lantenoisi” and P. douvillei when thoracic tergites numbers are not definitive (Hu et al., 2013). Conversely, P. longispinus is likely a valid taxon as there are a robust second thoracic tergite and hypertrophied spines on meraspid and holaspid specimens (Laibl et al., 2015). To this end, while P. longispinus is accounted for, M. deprati, P. douvillei, and P. “lantenoisi” need to be explored. 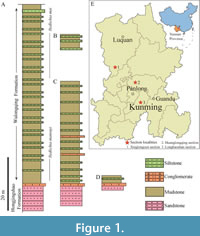 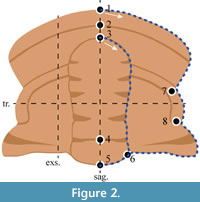 Specimens were photographed with a Canon EOS 5D Mk. IV camera under normal light. These photographs were used for landmarking and semilandmarking. Landmarking and semilandmarking was conducted using the Thin-Plate Spline (TPS) suite of software (http://life.bio.sunysb.edu/morph/index.html). A TPS file was constructed using tpsUtil64 (v.1.7). The TPS file was imported into tpsDig2 (v.2.26). The xy coordinates were recorded for eight homologous landmarks and two curves: one curve with 30 points around the margin of the glabellar and a second curve with 50 points along the cranidial margin (Figure 2; Appendix 1). The curves were digitised in a clockwise direction. The semilandmarks were computationally adjusted into sliding semilandmarks by using the minimization of Procrustes distance prior to analysis (Adams and Otárola‐Castillo, 2013). Semilandmarks summarize the curvature of the perimeter of cranidial features (Webster and Sheets, 2010), and landmarks combined semilandmarks summarize the overall cranidial shape (Hopkins and Webster, 2009; Esteve et al., 2017). An explanation of the landmarks is presented in Table 2. Curves and landmarks were placed preferentially on the right cephalic side (Figure 2). When the right side was damaged, the left side was digitised. The resulting TPS file was imported into the R environment. For specimens that had the left side digitised, the landmark and semilandmark data were mirrored in R. The ‘geomorph’ package (Adams and Otárola‐Castillo, 2013) conducted a Procrustes Superposition and Principal Components Analysis (PCA) of superimposed data (following Webster and Hughes, 1999; Wester and Sheets, 2010). Procrustes tangent coordinates were plotted against logged-centroid size values to explore patterns in specimen size. Finally, statistically significant differences between the mean shape of the major groups of specimens (discussed in Systematic Palaeontology) were explored with a Procrustes ANOVA following Bicknell et al. (2019a). Here the ANOVA groupings were the two sites where the different genera were found: the Huanglongqing section and the Longbaoshan and Xinglongcun sections. The Principal Component (PC) data were plotted and colour coded by sections as we were unable to confidently assign select specimens to either Palaeolenus douvillei or P. “lantenoisi (Appendix 2). This uncertainty reflected that preservation of just the cranidia or the lack of all thoracic tergites. Additionally, sagittal body length measurements were taken for complete specimens to further assess the relationship between body length and thoracic tergite count (Appendix 2). Note that complete here refers to those specimens that have an articulated cephalon, thorax, and pygidium. 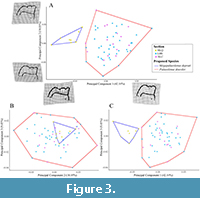 Principal Component (PC) 1 explains 42.1% of the variance and shows groups that were split mostly with fixigena and glabella variation (Figure 3A, C). Furthermore, posterolateral projection, glabella shape, palpebral lobe length, relative length of preglabellar field, and anterior border all vary along this axis. More positive PC1 values (-0.0321 to 0.07481) contain specimens from the Longbaoshan and Xinglongcun sections and more negative PC1 values (<-0.0377) contain specimens from the Huanglongqing Section. Negative scores along PC1 are associated with a more convex and broader (tr.) glabella, longer (exs.) palpebral lobes, a narrower (tr.) fixigena field, a shorter (sag.), but wider (tr.) posterolateral projection, and an anterior border that is longer (sag.) than the preglabellar field. More positive scores along PC1 are associated with a narrower (tr.) glabella, concave in the middle axial glabellar furrow, shorter (exs.) palpebral lobes, and an anterior border that is shorter (sag.) than the preglabellar field.

Results of the Procrustes ANOVA (F = 17.657, p = 0.001, iterations = 999) show that there is very significant difference between the specimens in the Longbaoshan and Xinglongcun sections and those specimens in the Huanglongqing Section. Plotting log-centroid size against regressed Procrustes ANOVA scores (Figure 4) shows that larger specimens are from the Huanglongqing section while specimens from in the Longbaoshan and Xinglongcun sections are smaller and still located in a different bivariate space as the Figure 3A (PC1 and 2).

The other distinct feature of the PC plots is that Huanglongqing Section specimens (= Megapalaeolenus deprati) occupy a distinct region of cranidial morphospace from the other specimens. The distinct separation of these specimens from Palaeolenus specimens along PC1 supports the suggestion of Luo et al. (2007, 2008, 2014) that M. deprati is a valid genus and species. This separation in PC space also shows that M. deprati is distinct from P. douvillei (sensu Park et al., 2008). Apart from the shape differences in cranidia, pleural spines of M. deprati are more curved than that of P. douvillei, and pleural lobe of M. deprati is pronouncedly wider (tr.) than axial lobe while pleural lobe of P. douvillei is slightly wider (tr.) than axial lobe. 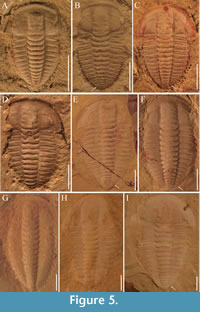 Description. The morphologically mature exoskeleton is ovate in outline, micropygous and 1-2 cm long (sag.). Cephalon is semi-elliptical. Ocular ridge is wider (tr.) compared to palpebral lobe length (sag.) and the relative width (tr.) of the ocular ridge and palpebral lobe length (sag.) are size-related. Smaller specimens have wider (tr.) ocular ridge compared to palpebral lobe length (sag.) (Figure 5A-D), which contrasts larger specimens (Figure 5 E-I). Glabella shape is variable: most specimens have a rectangular-shaped glabella that is expanded anteriorly in some larger specimens (Figure 5G-H). It is notable that some specimens only have a rectangular-shaped glabella without the expanded anterior (Figure 5A, D), and some specimens have a subcylindrical glabella (Figure 5I). Three or four pairs of glabellar furrows present. Fixigena is wider (tr.) than the librigena. The postero-lateral projection is long (sag.) and narrow (tr.). Most specimens have 13 thoracic tergites with larger specimens displaying 14 or 15tergites. Pleural lobe is slightly wider (tr.) than axial lobe. Semi-elliptic pygidium is divided into two parts by one transverse furrow. Its axial lobe is relatively wide (tr.) compared to its pleural lobe.

Remarks. The geometric morphometric results show that cranidia of Palaeolenus douvillei and P. “lantenoisi” occupy the same region of morphospace. Palaeolenus douvillei therefore shows substantial variation where most studied specimens have 13 thoracic tergites, indicative of P. “lantenoisi”, while large specimens have 14 or even 15 thoracic tergites, are indicative of P. douvillei (sensu Mansuy, 1912). Compared with Megapalaeolenus deprati, the palpebral lobes of P. douvillei are consistently shorter (sag.) or at most similar in length (tr.) to ocular ridges, with larger specimens having proportionally longer palpebral lobes than smaller specimens. The length (sag.) of the anterior border is variable and not size-related. 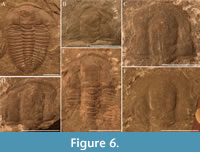 Description. Body ovate, with a length (sag.) of 2-3 cm. Cephalon half elliptic. Palpebral lobe consistently longer (exs.) than ocular ridge, subparallel to axial furrow. Glabella rounded and its anterior part expanded. The number of glabellar furrows is variable due to taphonomic alteration, but can be up to four. The fixigena is narrower (tr.) to equally wide compared to the librigena. The postero-lateral projection is relatively short (sag.) and wide (tr.). The number of thoracic tergites is 15. The pleural lobe is pronouncedly wider (tr.) than axial lobe. The semi-elliptical pygidium is much smaller than the cephalon and is divided into two parts by one transverse furrow. The axial lobe of pygidium is relatively wide compared to the pleural lobe.

The results of geometric morphometric analysis of 60 palaeolenid trilobites from the early Cambrian Wulongqing Formation show that the groups have been over-split and of the three species— Palaeolenus douvillei, P. “lantenoisi” and Megapalaeolenus deprati —only P. douvillei and M. deprati are valid taxa. Palaeolenus “lantenoisi” is here considered a junior synonym of P. douvillei. Further studies of Chinese Cambrian trilobites may highlight an over-stated diversity and that such studies are imperative to thoroughly understanding diversity during the Cambrian explosion.

This research is financially supported by the 973 project of the Ministry of Science and Technology of China (Grant 2013CB837100), the National Natural Science Foundation of China (Grant 41222014, 41172023, 41102012, 41272019, 41372021), the National Program for Support of Top-notch Young Professionals, the Ministry of Education of China, the Program of Introducing Talents of Discipline to Universities (P201102007, W20136100061), the Shaanxi Bureau of Science and Technology (FJ11366), the Young Talents of Northwest University, Program for New Century Excellent Talents in University (NCET-13-1008), Fundamental Research Funds for the Central Universities (2010ZY07, 2011YXL013, 2012097), the Strategic Priority Research Program of Chinese Academy of Sciences (XDB26010104), the 111 Project and the Ministry of Education of China for Chengjiang Scholars to Liu, J.N., and a University of New England Postdoctoral Fellowship (to R.D.C.B.). We thank J. Paterson, T. Park, F. Liu, F. Guo, H. Hu, M. Sun, and T. Dai for discussions and comments. L. Yan, Y. Wu, F. Chen and Y. Ding are thanked for collecting and managing specimens. We thank Y. Chen for training with software. Finally, we thank the comments of two anonymous reviewers that thoroughly improved the text.

Chang, W.T. 1966. On the classification of Redlichiacea, with description of new families and new genera. Acta Palaeontologica Sinica, 14:135-184. [In Chinese with English abstract and systematic palaeontology]

Lin, T.R. 2014. Application of cluster analysis to the taxonomy of palaeolenid trilobites, China--A new approach to the biozonay classification of the upper part of Tsanglangpu Formation of the Qiandongian Series in China. Acta Palaeontologica Sinica, 53:108-120. [In Chinese with English abstract]