Fossil records of Lamprosomatinae (Coleoptera: Chrysomelidae) are scarce. Till now only three findings of this subfamily were reported and all originated from Eocene Baltic amber. Based on well-preserved specimen, Damzenius anitae gen. et sp. nov. is described and illustrated from this Lagerstätte. A key to the known extinct species of Lamprosomatinae is provided. Assumed minimum age of Lamprosomatinae is dated as mid-Eocene to Upper Eocene (47.8-33.9 Ma). The diverse fossil Lamprosomatinae representatives provide strong evidence for the presence of thermophilic, humid and mixed forest, and indicative of warm temperate, humid, equable climate with reduced thermal seasonality in the Eocene Europe.

Copyright: June 2019 Paleontological Society.
This is an open access article distributed under the terms of Attribution-NonCommercial-ShareAlike 4.0 International (CC BY-NC-SA 4.0), which permits users to copy and redistribute the material in any medium or format, provided it is not used for commercial purposes and the original author and source are credited, with indications if any changes are made.
creativecommons.org/licenses/by-nc-sa/4.0/

The material examined is deposited in the collection of Andris Bukejs (Daugavpils, Latvia) [ACAB] maintained at Institute of Life Sciences and Technologies, Daugavpils University (Daugavpils, Latvia). The amber piece was polished by hand, allowing improved views of the included specimen, and was not subjected to any supplemental fixation.

Observations of this specimen were made using a Nikon SMZ 745T stereomicroscope. The photographs were taken using a Canon 70D camera with a macro lens (Canon MPE-65 mm). Extended depth of field at high magnifications was achieved by combining multiple images from a range of focal planes using Helicon Focus software. Measurements were taken using an ocular micrometer (expressed in millimeters). The following references were used for the comparison with extant taxa: Monrós (1956, 1958), Medvedev (1968), and Chamorro and Konstantinov (2011).

Baltic amber occurs in the “blau Erde” (“blue earth”), which can be found throughout northern Europe (Denmark, Sweden, Germany, Poland, and Lithuania), approximately 45 m below the surface, and in many places this unit is approximately 5 m below sea level (Engel, 2001). The greatest amber concentration, and from where most material originates, occurs on the Sambia peninsula (Samland), Kaliningrad Region, Russia. Exposed deposits can erode, and amber is washed up on shores not only of the Baltic countries, but as far away as the eastern coasts of England (Engel, 2001). Baltic amber is usually dated to the Upper Eocene (Priabonian, 37.2-33.9 Ma) (Aleksandrova and Zaporozhets, 2008; Perkovsky et al., 2007), although there are other estimates of the age of Baltic amber that extend as far back as the mid-Eocene (Lutetian, 47.8-41.3 Ma) (Ritzkowski, 1997; Szwedo and Sontag, 2013). According to Turkin (1997), Baltic amber was produced by Pinus succinifera (Conw.) Schub., which together with oak in the Eocene, dominated the humid mixed forest cover of Northern and Central Europe. More recent work on the chemical composition of Baltic amber has also suggested that trees within the family Araucariaceae or Sciadopityaceae might be candidates for the production of this amber deposit (Langenheim, 2003; Wolfe et al., 2009; Lambert et al., 2015).

Remarks. The specimen considered here was assigned to the tribe Lamprosomatini on the basis of a combination of characters defined by Chamorro and Konstantinov (2011) and also by Monrós (1956, 1958): (1) abdominal ventrites with fine transverse folding on their borders; (2) abdominal ventrite 5 not excised in shape of arc; (3) pygidium completely covered by elytra; (4) scutellum acutely triangular; (5) elytral punctation arranged in regular striae; and (6) pronotum and elytra hairless.

Included species. The new genus includes the type species only.

Etymology. The generic epithet is a patronym dedicated to Mr. Jonas Damzen (Vilnius, Lithuania), the collector of the amber piece. Gender masculine.

Note. The new genus is monotypic, represented by the type species only. Therefore, the generic description considerably overlaps that of the species. 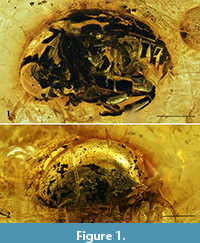 Etymology. The specific epithet is a patronym dedicated to my mother, Anita Bukeja (Daugavpils, Latvia). 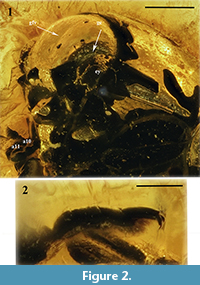 The author is sincerely grateful to Mr. J. Damzen (Vilnius, Lithuania) for donation of interesting fossil material and permission to use his photographs, and to Dr. R. McKellar (Royal Saskatchewan Museum, Regina, Saskatchewan, Canada) for linguistic suggestions on an early version of the manuscript.

Warchałowski, A. 2003, The Leaf-beetles (Chrysomelidae) of Europe and the Mediterranean Region. Natura Optima dux Foundation, Warszawa.