Copyright: May 2018 Paleontological Society.
This is an open access article distributed under the terms of Attribution-NonCommercial-ShareAlike 4.0 International (CC BY-NC-SA 4.0), which permits users to copy and redistribute the material in any medium or format, provided it is not used for commercial purposes and the original author and source are credited, with indications if any changes are made. creativecommons.org/licenses/by-nc-sa/4.0/

The material examined is currently housed in the private collection of Christel and Hans Werner Hoffeins, Hamburg, Germany (CCHH), and the holotype (current number CCHH 1771-1) will be placed in the Senckenberg Deutsches Entomologisches Institut under the number SDEI Coleoptera # 301525, as part of the institute’s amber collection. The amber piece was prepared manually and covered with polyurethane lacquer to avoid oxidation. Observations of this specimen were made using a Nikon® SMZ 745T stereomicroscope. The photographs were taken using a Nikon® SMZ 745T stereomicroscope equipped with a Nikon® DSFi1 digital camera. Extended depth of field at high magnifications was achieved by combining multiple images from a range of focal planes using Helicon Focus 6.0.1 software. Measurements were taken using an ocular micrometer on a stereomicroscope (and these are expressed in millimeters).

The type specimen of the species described herein has been provided with a red, printed label: “HOLOTYPE Trichodesma fennosarmatica sp. nov. Bukejs, Háva and Alekseev det. 2018”.

Note. The specimen considered here was assigned to the genus Trichodesma within the tribe Nicobiini based on a combination of the following morphological characters: (1) body dorsal surface with tufts of erect setae; (2) tarsal claws with wide, basal tooth. 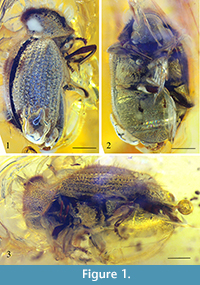 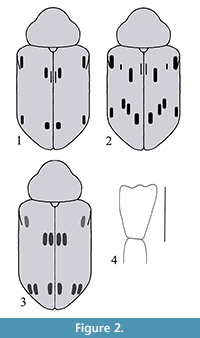 Several ecological inferences can be drawn on the basis of the fossil species diversity of Trichodesma in Baltic amber, when compared to the recent biology of the genus. Various hardwood trees have been reported as hosts for many members of Trichodesma in North America (White, 1982), some of these trees are: Carya, Lindera, Benzoin, Nyssa, Persea, and Liquidambar. In contrast to a majority of the described Baltic amber anobiine beetles (conifer specialists like Microbregma ; or taxa associated with many different trees, like Hemicoelus), the diverse Trichodesma representatives provide strong evidence for the presence of a rich, deciduous, warm-temperate flora in the Eocene Baltic forests. The recently published analyses of the Baltic amber plant assemblage (Alekseev and Gnilovskaja, 2016; Ignatov et al., 2016; Sadowski et al., 2017a, 2017b) complement the interpretation that is forming as a result of studies on insect inclusions. Plant inclusion data, combined with the data that has been accumulated in the last few decades, on the assemblages and paleoecology of phytophagous and xylophagous beetles, is building toward a significant advance in the understanding of the Eocene amber ecosystem.

The authors are sincerely grateful to Ch. and H.W. Hoffeins (Hamburg, Germany) for the loan of fossil material from their great private collection and for the determination of the Diptera syninclusion. Three anonymous reviewers are greatly appreciated for their valuable comments and corrections.

Abdullah, M. and Abdullah, A. 1967. Crictonia macleani, a new genus and species of the Hedobiini (Coleoptera, Anobiidae) from the Baltic amber. Entomological News, 28:23-27.

LeConte, J.L. 1861. Classification of the Coleoptera of North America. Prepared for the Smithsonian Institution. Part I. Smithsonian Miscellaneous Collections, 136:1-214.

Peck, S.B. 2005. A Checklist of the Beetles of Cuba with Data on Distributions and Bionomics (Insecta: Coleoptera). Arthropods of Florida and Neighboring Land Areas. Vol. 18. Florida Department of Agriculture and Consumer Services, Gainesville.

White, R.E. 1982. A Catalog of the Coleoptera of America North of Mexico. Family Anobiidae. U.S. Department of Agriculture, Washington, D.C.