A new species of Cacomorphocerus Schaufuss, 1892 (Coleoptera: Cantharidae) from Baltic amber with a key to known species

Cacomorphocerus eocenicus sp. nov. (Coleoptera: Cantharidae) is described and illustrated on the base of one well-preserved specimen from Eocene Baltic amber. It is the sixth described species of this fossil genus, and it is characterized by possessing antennomeres 6-7 that are slightly modified and dilated (while antennomeres 3-9 are modified, and saucer-shaped in other known species). A key to the fossil species of Cacomorphocerus is here provided.

Copyright: June 2019 Paleontological Society.
This is an open access article distributed under the terms of Attribution-NonCommercial-ShareAlike 4.0 International (CC BY-NC-SA 4.0), which permits users to copy and redistribute the material in any medium or format, provided it is not used for commercial purposes and the original author and source are credited, with indications if any changes are made.
creativecommons.org/licenses/by-nc-sa/4.0/

The fossil genus Cacomorphocerus Schaufuss, 1892, comprises five species described from the Eocene Baltic amber: C. cerambyx Schaufuss, 1892; C. jantaricus (Kuśka and Kania, 2010); C. wiszniewskii Fanti and Kupryjanowicz, 2018; C. bentifabrici Fanti and Damgaard, 2018; and C. madseni Fanti and Damgaard, 2018. One undescribed specimen belonging to this genus has also been reported from the Upper Eocene Rovno amber (Kazantsev and Perkovsky, 2014). In the present paper, a new species of Cacomorphocerus is described and illustrated from Baltic amber. The addition of this new species may substantially contribute to the understanding of the diversification pattern of this enigmatic genus throughout Eocene and provide new data that will help to understand and highlight Cantharidae evolution.

The material examined is deposited in the Palaeontology Collection of the Royal Saskatchewan Museum (Regina, Saskatchewan, Canada) [RSM]. Observations of this specimen were made using a Nikon SMZ 745T stereomicroscope. Photographs were taken using a Visionary Digital imaging system, consisting of a Canon EOS 5D camera with a Canon MP-E 65 mm macrophotography lens, attached to an automated camera lift with studio flash lighting. Extended depth of field at high magnifications was achieved by combining multiple images from a range of focal planes using Helicon Focus 6.8.0 software, and the resulting images were edited to create figures using Adobe Photoshop CS5.

Diagnosis. The genus is recognizable by the last maxillary palpomere securiform, the elytra elongate, and 12-segmented antennae with medial antennomeres saucer-shaped (antennomeres 3-9) or with antennomeres 6-7 slightly dilated and asymmetrical. Furthermore, it is characterized by claws with tooth basally, while the claws are without tooth or lobe in the related genus Sucinorhagonycha Kuśka, 1996.

Distribution. The genus appears to be limited to the Eocene and is recorded in the Baltic and Rovno amber. 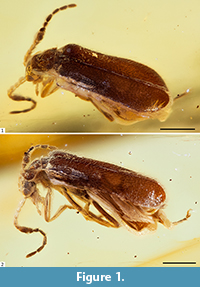 Etymology. This new species is named after its geological epoch.

Differential diagnosis. Cacomorphocerus eocenicus sp. nov. differs from C. cerambyx, C. jantaricus, C. wiszniewskii, C. bentifabrici, and C. madseni in possessing antennomeres 6-7 that are slightly modified and dilated (while antennomeres 3-9 are modified, saucer-shaped in above mentioned species), and smaller body size. Additionally, C. eocenicus sp. nov. has slightly transverse pronotum (about 1.1× as wide as long), with anterior margin slightly rounded and convex, lateral margins straight (in lateral view), sculpture of disc simple with two tubercles, and angles without denticles. In contrast, C. cerambyx has quadrate pronotum with longitudinal impression; C. jantaricus has rectangular pronotum (in dorsal view) with small denticles situated near each anterolateral corner, and disc with two tubercles; C. wiszniewskii has sub-rectangular pronotum with denticles laterally; C. bentifabrici has slightly elongate pronotum with anterior margin strongly rounded and protruding, and with two thickenings near posterior margin; C. madseni has pronotum with deep transverse incision medially, and with denticles present at posterior angles and near the mid-length of lateral margins. See also key in Appendix 1. 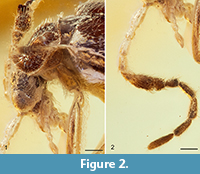 Scutellar shield large, triangular with widely rounded apex, about as long as wide.

Elytra long (Figure 1.1), about 4.3× as long as pronotum, at base distinctly wider than pronotum, subparallel-sided, with rounded apex, covering and surpassing last abdominal ventrite, with fine and sparse punctation. Macropterous.

The extensive Eocene Baltic amber-producing forest has yielded a rich fauna of Cantharidae. The genus Cacomorphocerus seems to be particularly widespread and common in Baltic amber, but is also present in Rovno amber. Together with the genera Sucinocantharis Kuśka and Kania, 2010, Eridanula Fanti and Damgaard, 2018, and Noergaardia Fanti and Damgaard, 2018, Cacomorphocerus belongs to the extinct tribe Cacomorphocerini Fanti and Kupryjanowicz, 2018. This tribe is characterized by 12-19 segmented antennae with strongly modified and saucer-shaped medial antennomeres (Fanti and Kupryjanowicz, 2018). Based upon their distinctive antennal shapes, members of the tribe have been considered similar to the South American genus Dysmorphocerus Solier, 1849 (composed of four species from Chile) (Delkeskamp, 1939, 1977; Constantin, 2008), and were later considered to belong within the subfamily Dysmorphocerinae Brancucci, 1980 (Kazantsev, 2013). However, Dysmorphocerinae is known almost completely from the former components of Gondwana (Brancucci, 1980). More recently, the genus Cacomorphocerus has instead been recognized as part of the subfamily Cantharinae, with an apparent origination during the Eocene.

Despite extensive study, records of closely related species are unknown from older amber deposits, such as Late Cretaceous Burmese amber, as well as younger deposits, such as Miocene Dominican amber (Fanti, 2017; Ross, 2018). The apparent absense of this group in the older deposits and their apparent concentration in the Eocene European amber, suggests a possible origin and extinction of the group during the Eocene. Furthermore, the modified antennomeres present in C. eocenicus sp. nov. and the other congeners suggest that this trait may have evolved from filiform antennae at the beginning or within the Eocene. At the moment, nothing similar to Cacomorphocerus has been recorded in North America, although several deposits, as the Florissant Formation of Colorado (USA) contain various fossils Cantharidae (Fanti, 2017). The existing palaeobiogeographic evidence suggests that the genus and tribe likely had a European or Palaearctic distribution while they existed. Hopefully, further studies will shed additional light on the full temporal and spatial range of these unusual members of Cantharidae.