One fossil subgenus and three fossil species of soldier beetles: Libertimalthodes subg. nov., Cantharis (Cantharis) dougi sp. nov., Malthodes (Libertimalthodes) elytratus sp. nov. and Malthodes (Malthodes) nublar sp. nov., are described from Eocene Baltic amber. The deposit appears to be comparatively rich in inclusions of Cantharidae. The new subgenus differs from the nominotypical subgenus in possessing elytra that are elongated and covering the last abdominal urites, a huge aedeagus and the last abdominal sternite that is wide and little modified. Furthermore, the new species has an aedeagus that is almost completely extruded, which is a rare feature to find in fossils of soldier beetles. Malthodes nublar sp. nov. is characterized by short elytra and has a different shape of the terminalia, while Cantharis dougi sp. nov. has a different pronotal shape than in known fossil species. Malthodes aphidiphagus Fanti and Michalski, 2018, is transferred from the nominotypical subgenus Malthodes to the new subgenus Libertimalthodes.

Copyright: May 2019 Paleontological Society.
This is an open access article distributed under the terms of Attribution-NonCommercial-ShareAlike 4.0 International (CC BY-NC-SA 4.0), which permits users to copy and redistribute the material in any medium or format, provided it is not used for commercial purposes and the original author and source are credited, with indications if any changes are made.
creativecommons.org/licenses/by-nc-sa/4.0/

The number of taxa of Cantharidae preserved in Baltic amber is very high with 51 species described and also some extinct lineages (Fanti, 2017a, 2017b; Fanti and Damgaard, 2018; Fanti and Kupryjanowicz, 2018), and it seems probable that during the Eocene many more species of the family lived in Northern Europe and the Baltic region than currently inhabit the region. In this paper we describe a new species of Cantharis Linnaeus, 1758, and two new species of Malthodes Kiesenwetter, 1852, one of which is a new subgenus and is currently only known from fossil material. The new subgenus shows a peculiar character in that it has the aedeagus almost completely exposed and clearly visible: this is a useful aspect because the aedeagus, along with the shape of claws, tarsomeres and antennae, are important characters in the systematics of the family Cantharidae. A key to the subgenera of Malthodes is provided in Appendix 1. The genus Malthodes Kiesenwetter, 1852, is widespread throughout the Holarctic and the subfamily Malthininae Kiesenwetter, 1852, to which it belongs, is considered more recent than the other subfamilies of soldier beetles (Brancucci, 1980). Recently a probably related genus has been described from the Cretaceous Burmese amber (Hsiao et al., 2016); this finding demonstrates that our understanding of evolutionary changes in the Cantharidae is limited, also due to the scarcity of the fossil remains from the Cretaceous. The discovery of specimens of Malthodes with long elytra, which is a character currently known only in the fossil remains of the Eocene Epoch and with some aedeagus aspects similar to the subfamily Cantharinae Imhoff, 1856, supports an older origin.

The examined material originated from the Kaliningrad Region, Russia, near the village of Yantarny (Sambian Peninsula). Here, hundreds of tons of amber have been extracted in open-cast mines (at a depth of 12–60 m) since the middle of the seventeenth century, with pronounced industrialization since 1874 (Małka, 2010) and mechanization since around 1930. The amber pieces with the inclusions are deposited in the J. Kupryjanowicz collection at the Andrzej Myrcha Center of Nature, University of Białystok, Poland (UCP UwB). The specimens were polished, mounted on the microscope’s ball table, and we used a removable and re-usable rubber adhesive (Faber Castell Tack-it Removable Reusable Adhesive) to slide-mounting were used during the observation. Digital photographs were taken in the Laboratory of Evolutionary Biology and Insect Ecology at the Institute of Biology, University of Białystok (Poland). Images were obtained with an Olympus DSX110 stereomicroscope and a camera with a colour CCD image sensor (1/1.8 inch, 2.01 megapixels), equipped with a DSXPLFL 3.6x lens. The specimen drawings were made using CorelDrawX6. Morphological terms and acronyms of the last abdominal segments of Malthodes, follow Liberti (2011, 2015).

Type material. Holotype: probably male, in Baltic amber, deposited under accession number UCP UwB 1679. The yellow amber piece measures 15 x 6 x 4 mm, and the inclusion is only slightly folded, with a white emulsion on the eye and opaque emulsion on the ventral side (particularly surrounding sternum and head). Syninclusions consist of wood remains and a stellate hair. 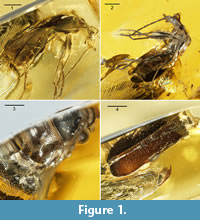 Etymology. New species is named in honour of Doug Lundberg (Colorado Springs, USA), amber expert and dear friend of one of the authors (J. Kupryjanowicz).

Differential diagnosis. Three species of Cantharis have been described from amber deposits: Cantharis (s. str.) sucinonigra Kuśka, 1992, and C. (Cyrtomoptila) sucinokotejai (Kuśka, 1996) have similar size (6.0 mm) but different coloration and pronotal shape than C. dougi sp. nov. C. sucinonigra has red pronotum that is roundish at sides, while C. sucinokotejai has almost square pronotum, and has thorax and femora black-brown with tibiae and tarsi yellow-brown (Kuśka, 1992, 1996; Fanti, 2017a, 2017b). Whereas, Cantharis (Cyrtomoptila) mikkelsenorum Fanti and Damgaard, 2018, has a larger body size and a pronotum subrectangular with sinuous lateral margins and with ripples in the middle (Fanti and Damgaard, 2018). 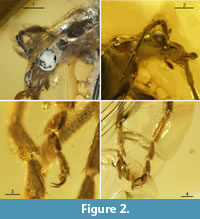 Etymology. New subgenus is named in honour of Gianfranco Liberti (Uboldo, Italy), expert on soldier beetles (particularly Malthodes), as well as dear friend and mentor of an author (F. Fanti) on these beetles, plus the addition of the genus Malthodes Kiesenwetter, 1852. Gender: masculine.

Diagnosis. Malthininae features found in new subgenus include: globular and pointed last maxillary palpomere, general habitus, and last urites modified (similar to extant Malthodes). Differences from nominotypical subgenus include: elytra elongate, covering and slightly surpassing last abdominal segments, and large aedeagus, which is very wide and about as long as last two sternites combined. Furthermore, last sternite is little modified, and antennae of males are short. The other subgenus Podistrina Fairmaire, 1875,, with doubtful validity (Brancucci, 1980), is characterized by elongate head, longitudinal pronotum, absence of hind wings, and elytra that are particularly short (Brancucci, 1980). 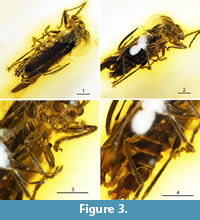 Differential diagnosis. Only fossil Malthodes aphidiphagus Fanti and Michalski, 2018 is similar to Malthodes (Libertimalthodes) elytratus subg. et sp. nov. in possessing elongate elytra (Fanti and Michalski, 2018). However, new species is easily recognizable based upon its last sternite being both wide and roundish, with different shape of the posterior most tergites, slender habitus, wider and more elongate aedeagus, and slightly smaller body size (3.7 mm instead of 4.0 mm). 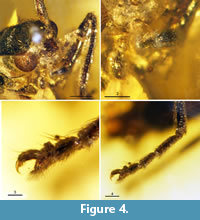 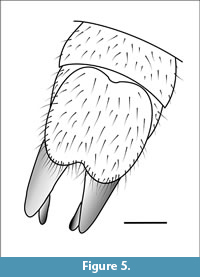 Penultimate sternite strongly transverse; last sternite very wide, with sides strongly rounded and apically undulate with a central depression-concavity equipped with long setae on all the surface. Aedeagus almost completely extruded, huge, wide, and as large as last sternite at its base, with long dorsal shield slightly folded at apex, parameres (laterophyses) long and robust with apex slightly enlarged and globular. 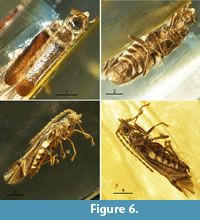 Etymology. Specific epithet is in homage to “Isla Nublar”, fictional island setting of Jurassic Park, novel of Michael Crichton and film directed by Steven Spielberg. Epithet is to be treated as noun in apposition. 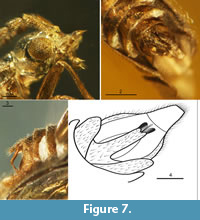 Malthodes (Libertimalthodes) elytratus subg. et sp. nov. exhibits a head that is globular, a distinctive pronotal shape, and modified posterior abdominal urites that show it is clearly related to the genus Malthodes Kiesenwetter 1852. The latter genus is extremely variable, but the differences in elytral lengths (particularly when it is combined with the very large aedeagus and the little modified posterior abdominal segments) can be a useful character in support of the new subgenera, much as it has been informative in the related subgenus Indomalthinus Brancucci in Wittmer and Brancucci, 1978, which has slightly longer elytra, and small differences in the pronotum with respect to the nominotypical subgenus (Brancucci, 1978). Malthodes species traditionally have short elytra that leave some abdominal segments uncovered (Brancucci, 1980; Liberti, 2011), but we can also find species with more elongate elytra, such as Malthodes rectus LeConte, 1881 (in North America), or species of the brevicollis-group in Europe (Liberti, 2016, 2017), for example. However, Malthodes (Libertimalthodes) elytratus subg. et sp. nov. displays elongate elytra, which completely cover and overtake the abdomen. It is widely accepted that the shape of the aedeagus is an important phylogenetic character among the genera of soldier beetles (Brancucci, 1980; Liberti, 2011), and this feature even has some importance at the family level for many beetles (Schilthuizen et al., 2016). The morphology of the posterior most abdominal segments and the aedeagus were studied for the first time, in a broad way, by Magis (1963, 1964). In these works, the posterior structures of the abdomen are compared with those of representatives of the genus Rhagonycha Eschscholtz, 1830, revealing that the aedeagus of Malthodes members is considerably shorter, the tegmen is reduced, and variations in the median lobe are most diagnostic. Subsequently, the aedeagus was studied by Wittmer (1970, 1979), Brancucci (1980), and Liberti (2011, 2015, 2016, 2017). The aedeagus is scarcely visible in other fossil records for the family Cantharidae, and we find it marginally visible in: Cacomorphocerus jantaricus (Kuśka and Kania, 2010), and Malthodes aphidiphagus Fanti and Michalski, 2018, and exposed to a slightly larger extent in: Kuskaella macroptera Fanti and Kupryjanowicz, 2017, Malthodes rovnoensis Kazantsev and Perkovsky, 2014, and the new Malthodes species with short elytra described herein. Currently, only two specimens with the aedeagus almost completely extruded are known, belonging to Sucinorhagonycha kulickae Kuśka, 1996, and Mimoplatycis bicolor Fanti and Vitali, 2017 (Kuśka, 1996; Kuśka and Kania, 2010; Kazantsev and Perkovsky, 2014; Fanti and Kupryjanowicz, 2017; Fanti and Vitali, 2017; Fanti and Michalski, 2018). Small dimensions and globular shape of the aedeagus are present in the known species and in Malthodes nublar sp. nov., but not at all in Malthodes (Libertimalthodes) subg. nov. In fact, Libertimalthodes members possess an aedeagus more similar to the subfamily Cantharinae Imhoff, 1856, in terms of its large size, the elongate shape of the dorsal shield (“pièce basale” of Brancucci), and long, robust parameres-laterophyses (see: Magis, 1971; Brancucci, 1980). Conversely, the apparent lack of an internal sac, shows similarity to the Malthininae, and Malthodes. The range of variation observed within features of the aedeagus in the genus Malthodes suggests that further material and studies may ultimately support elevation of the new subgenus Libertimalthodes to a higher taxonomic rank.

We would like to give our sincere thanks to G. Liberti (Uboldo, Varese, Italy) for his precious help. We equally thank M. Hyžný (handling editor of Palaeontologia Electronica), and three anonymous reviewers for providing valuable suggestions and comments to improve this manuscript.

LeConte, J.L. 1881. Synopsis of the Lampyridae of the United States. Transactions of the American Entomological Society, 9:15-72.