Stylohyal of a giant sloth

Description of the stylohyal bone of a giant sloth (Lestodon armatus)

The hyoid apparatus in fossil Xenarthrans is rarely preserved. Its largest bone, the stylohyal, is the most frequently found as an isolated element. It is known for some species of Pleistocene ground sloths (Megalonyx jeffersonii, Megatherium americanum, Paramylodon harlani, Nothrotheriops shastensis, Glossotherium robustum and Scelidotherium leptocephalum) but not for the largest mylodontid Lestodon armatus. Here we describe a right stylohyal found in the late Pleistocene megafaunal bonebed of the Arroyo del Vizcaíno site, Uruguay, as two perfectly matched pieces that were within a few centimeters of each other. A small notch, possibly a conchoidal flaked perimortem fracture, is observed in the lateral face. The specimen, whose general form is a sinusoid cylinder with the proximal end expanded and compressed, must have belonged to a juvenile individual, since it lacks both the distal and proximal surfaces that articulate with the skull and the epihyal, respectively. Instead, both ends show an irregular surface as those seen in the contact with the growth cartilage. Additionally, its maximum length is 105 mm, larger than the equivalent part of the stylohyal of adult Glossotherium. At the expanded proximal end that articulates with the skull the large fossa found in Glossotherium and Scelidotherium cannot be observed, which could be due to a taxonomic difference, to the stage of growth or both of them. The bone shows marks, several interpreted as caused by trampling and at least one with features as those left by human tools.

Several aspects of the paleobiology of the South American megafauna (Fariña et al., 2013) have been studied in the past decades. One of them is the analysis of the remarkably fused hyoid apparatus of fossil Xenarthrans (Pérez et al., 2010), which provides insight on the form of the tongue and its function in food intake and intraoral processing. 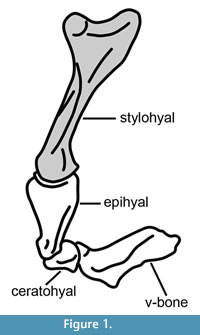 The hyoid apparatus of mammals is generally formed by four paired bones (stylohyals, epihyals, ceratohyals and thyrohyals) and the unpaired basihyal. In xenarthrans (Figure 1), the thyrohyals and basihyal are fused and form a basithyrohyal or V-bone (Pérez et al., 2010); in Pleistocene glyptodonts the epihyal, ceratohyal and stylohyal are fused and form the sigmohyal bone (Pérez et al., 2000). Among Pleistocene ground sloths, the morphofunctional analyses of Perez et al. (2010) indicate a high capacity for tongue protusion in mylodontines and a more limited capacity in Scelidotherium and Megatherium.

Preservation of the complete hyoid apparatus for most fossil sloth taxa is rare, and commonly only isolated elements, commonly the stylohyal, are known. Leidy (1855) illustrated the fused basithyrohyal in Megalonyx jeffersonii. Stock (1925) described and illustrated the complete hyoid of the North American mylodont, Paramylodon harlani, based on a composite of isolated bones recovered from the tar pits at Rancho La Brea, California, and referred a single stylohyal and basithyrohyal from the same locality to the nothrothere, Nothrotheriops shastensis. Pérez et al. (2010) described the hyoid bones for several fossil Xenarthran species, including the mylodontid ground sloths Glossotherium robustum and Scelidotherium leptocephalum, but did not include any specimens referred to the largest mylodont Lestodon armatus. In this paper we describe a right stylohyal (Figure 2), which we refer to the large mylodontid Lestodon armatus, found in the late Pleistocene megafaunal bonebed of the Arroyo del Vizcaíno site near the town of Sauce, Departamento de Canelones, 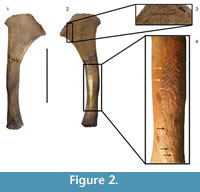 Uruguay, dated between 27 and 32 ky (Fariña et al., 2014). The stylohyal is the upper most proximal element of the anterior cornua that articulates with the petrous part of the temporal in the basicranium, via the tympanohyal ligament or cartilage. We should note our orientation of elements starts at the skull making the stylohyal the most proximal element while Naples (1986) started at the basihyal and considered the stylohyal the most distal element in the series.

Although Glossotherium is also present in the fauna from the Arroyo del Vizcaíno, because Lestodon is the most commonly found species in that site, we feel confident in referring the described specimen to this genus for the reasons to be discussed below. 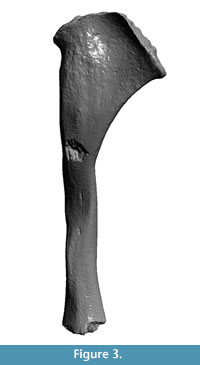 The stylohyal (CAV 476) was found in two pieces that were within a few centimeters of each other. They were put together and a perfect match was observed (Figure 2, Figure 3), leaving only a small notch in the medial face and a larger one in the lateral face, which is interpreted as a conchoidal flaked oblique (hence perimortem) fracture like those caused by an impact when the bone was still fresh (Fisher, 1995; Pickering et al., 2005).

Three-dimensional (3D) reconstructions of the stylohyal CAV 476 and a sthylohyal of Glossotherium robustum (MNHN 914) were performed with DAVID SLS-2 structured light scanning (Figure 3, Figure 4, with animated versions in Appendix 2.). The 3D reconstructions have the advantage that they can be manipulated (rotated, enlarged and measured) by the reader in order to visualize and compare the structures pointed in the text.

As mentioned before, the hyoid apparatus in xenarthrans is distinguished from other mammals by the co-ossification of some elements such as the basihyal and thyrohyal bones, although most fossil sloths retain independent elements, including the stylohyal (Pérez et al., 2010). Like in most mammals, in sloths the stylohyal is the largest bone in the hyoid series and is commonly preserved. 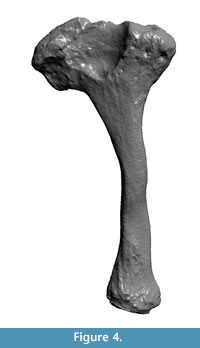 The form of the bone from the Arroyo del Vizcaíno site is similar to that of other sloths (Figure 5), both extinct (Pérez et al., 2010) and extant (Naples, 1986). Its form is of a sinusoid cylinder with the proximal end expanded and mediolaterally compressed for the origin of the styloglossus muscle (Naples, 1986). The specimen lacks the surfaces that articulate proximally with the skull, at the tympanohyal, and distally with the epihyal. Instead, both ends show an irregular surface commonly seen in the diaphyses of juvenile individuals since the epiphyseal closure in most mammals occurs relatively late in the ontogeny. Its maximum length is 105 mm, its anteroposterior diameter at midshaft is 10 mm, and its mediolateral diameter is 9 mm. The maximum anteroposterior dimension of the expanded proximal end is 38 mm. The general shape is more sinusoidal than in Glossotherium, maybe due to a large mediolateral constriction in the midshaft. At the expanded end that articulates with the skull there is a large fossa in Glossotherium (Figure 4) and in Scelidotherium (Pérez et al., 2010, figure 6), while in the Lestodon this fossa is not apparent. Since we could not find a stylohyal of an adult Lestodon to compare, it is not possible to rule it out that this is a taxonomic difference, simply reflects the stage of growth or a combination of both. 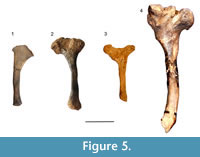 Thirteen parallel marks are observed in the midshaft, which are likely to have been caused by trampling and one at the proximal end (Figure 2.3, Figure 3). The latter shows features of those caused by human agency, seen on other bones of Lestodon from the site, as discussed in Fariña et al. (2014). That mark on the stylohyal was studied using an Olympus SZ61 stereomicroscope under a magnification of 45x and methods based on extended depth-of-field to analyze several features of the mark. The depth of the cut is 0.151 mm with an opening angle of 124º. The presence of asymmetrical shoulders, along with the depth and angle of the cut, resemble the features found in fossil bones cut with flint tools (Bello et al., 2009). The mark examined is located in the proximal end of the stylohyal, close to the area of insertion of the muscle styloglossus of Naples (1986), or occipitohyoideus of Pérez et al. (2010) (Figure 2.2). 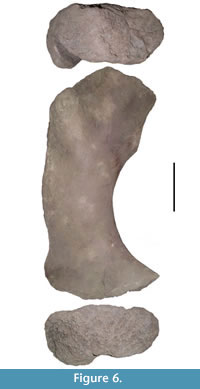 As noted, the total length of the element studied is 105 mm. The stylohyal of adult Glossotherium robustum (MNHN 914) measured had a total length of 125 mm, and the equivalent part measures about 94 mm (Figure 4). The stylohyal of G. robustum in Pérez et al. (2010, figure 6), had equivalent measurements. Stock (1925) reported an average length of 129.3 mm based on 20 right stylohyals of Paramylodon harlani. If geometric similarity is assumed between these two morphologically similar and closely related ground sloths (see Fariña et al., 1998 for discussion on body mass), an adult Lestodon armatus must have had a stylohyal of about 125 mm x (4000 kg/1500 kg)1/3 = 173 mm in length. This difference in size, along with the fact that both ends show the usual morphology of the attachment to cartilaginous areas (Figure 2, Figure 3), leads us to conclude that the individual was a juvenile specimen of L. armatus, whose body mass must have been 1500 kg x (105 mm/94 mm)3 ≈ 2090 kg, again proportionally estimated after G. robustum. However, this must be considered a maximum, since juveniles have allometrically larger heads (Gould, 1966).

A minimum of 20 individuals of L. armatus are currently known from the Arroyo del Vizcaíno site including at least three juveniles. Even though this hyoid and other bones cannot be confidently assigned to the same individual, the size of the femur CAV 935 is within the range that would be expected if it did belong to a nearly two-tonne juvenile (Figure 6).

The interpretation for the presence of cut marks on the proximal surface of the stylohyal is congruent with the access to the insertion area of the tongue muscle styloglossus by humans. The tongue of this two-tonne individual of Lestodon, if proportional with that of a cow must have had a mass of about 10 kg. According to the chronicles (Concolorcorvo, 1773:33-34, see Appendix 1), when the wild cattle in that region were hunted for their hides in the eighteenth and nineteenth centuries, the gauchos (or gauderios, former inhabitants of southern South America countryside-equivalent to North American cowboys), preferred to eat meat that was easy to extract, like the subcutaneous muscle in the abdomen (very conveniently called still today “matambre”, a corruption from “mata hambre”- literally, hunger killer) and the fat-rich tongue.

We propose that the hyoid described here must have belonged to a sub-adult individual of Lestodon armatus. It shows features compatible with human-made modifications, such as cut marks and a conchoidal fracture. A possible interpretation is that those modifications were produced by humans trying to access the tongue to use it as food.

Leidy, J. 1855. A memoir on the extinct sloth tribe of North America. Smithsonian Contributions to Knowledge, 7:1-68.

Naples, V.L. 1986. The morphology and function of the hyoid region in the tree sloths, Bradypus and Choloepus. Journal of Mammalogy, 67:712-724.