An outline of the European Quaternary localities with freshwater gastropods: Data on geography and updated stratigraphy

Fossil and subfossil freshwater gastropods of the European Quaternary have been studied extensively by numerous authors during the nineteenth and twentieth centuries. Despite the wealth of information, these papers usually focus on regional aspects. Geographic names, however, may have changed due to politics and the stratigraphy is outdated in many cases. Since then, numerous papers improved the taxonomic understanding of certain groups of freshwater gastropods and revised the often confused nomenclatural history. Nevertheless, no efforts were made to collect and summarize the data on a pan-European scale in order to compare them. This study focuses specifically on recording Pleistocene and Holocene localities of Europe and some adjacent Asian countries bearing freshwater gastropods, combined with updated stratigraphic information when available. This resulted in a dataset of 1473 localities, which may serve as a base for future analyses of Eurasian post-Pliocene freshwater systems and their biota.

Due to their high preservation potential, shell-bearing gastropods are among the most common fossil and subfossil (<0.01 Ma) macro-organisms in Pleistocene and Holocene deposits (Sparks, 1961). Their shells provide valuable information on palaeoenvironmental evolution as geochemical archives (e.g., Leng and Marshall, 2004; Neubauer et al., 2014), as potential palaeoclimatic proxies (e.g., Szymanek et al., 2005; Sümegi et al., 2008; Szymanek, 2011, 2013, 2014) or as ecological indicators, since the ecology of many species is well understood (e.g., Welter-Schultes, 2012 and references therein).

In Europe, Quaternary freshwater gastropod assemblages have been intensively studied during the last 150 years (e.g., Geyer, 1912; Ložek, 1964; Esu and Girotti, 1975; Alexandrowicz, 1999; Limondin-Lozouet et al., 2013). On a regional scale several studies tried to integrate areal and distribution data from different localities bearing Quaternary freshwater and/or terrestrial gastropods. Perhaps the most widely cited work is the comprehensive synopsis of Ložek (1964), who provided not only a complete list of the Quaternary localities of former Czechoslovakia, but also gave a detailed list of the species and their ecology. A significant addition to this effort is the study published by Hóračová et al. (2015) who assembled a complete and updated list of Holocene sites bearing molluscs in the Czech and Slovak Republics. Although shorter, but in the same spirit, Skompski (1989) published an outline of 107 sites in south-eastern Poland bearing fossil and subfossil gastropods. The list was composed of the site name, reference, the sediment type and the age of the deposit. Similarly, Alexandrowicz (2013) summarized the 154 localities with Late Glacial and Holocene lacustrine faunas in northern Poland, while the molluscs of the Eemian Interglacial in 35 sections across Poland were studied by Alexandrowicz and Alexandrowicz (2010). In north-western Europe, several non-marine molluscan faunas were reviewed in an attempt to shed light on the stratigraphic position of the Cromerian (Meijer and Preece, 1996). Moreover, the analysis of the distribution of the land snail Discus ruderatus by Dehm (1967) provided additional information on post-glacial localities including freshwater species in southern Germany. A substantial and up-to-date work on the Quaternary freshwater gastropods of Belarus with data on selected Lithuanian, Polish and Russian localities was recently published by Sanko (2007). Other notable papers with regional focus include the post-Pliocene non-marine Mollusca of Ireland and the East of England (Kennard and Woodward, 1917, 1922) and the Plio-Pleistocene and Holocene molluscs of Austria (Frank, 2006). These major works are a rich source of information on the freshwater assemblages of the European Quaternary.

Nonetheless, at a pan-European scale, studies compiling and analysing geographic occurrences are missing. Despite the continuous effort to record fossil gastropod assemblages, inconsistencies and uncertainties concerning the stratigraphic ages hamper comparisons and analyses. For example, the use of the stratigraphic ages of the Holocene chronozones, differ depending on the study area and publication date (e.g., Ložek, 1964; Wojciechowski, 1999; Bitinas et al., 2002; Mouthon and Magny, 2014). Another point to address is the difficulty to correlate regional stratigraphy with the international geological timescale (e.g., many Greek localities of the Damatria, Kritika, Kos, Phoka-Elia, Sefto, Stefanena, Tafi and Vokasia formations in Willmann, 1981; Böger, 1983). The problems of correlating literature-based data are to some extent purely conceptual due to changes in definitions of chronostratigraphic units. Hence, the inclusion of the formerly Pliocene Gelasian Stage into the Pleistocene in 2009 shifted the beginning of the Pleistocene from 1.806 Ma to 2.588 Ma (Gibbard et al., 2010; Gradstein et al., 2012) and resulted in potential pitfalls if informal terms such as “early Pleistocene” are interpreted from the literature.

The purpose of this paper is to address the aforementioned need for an integrated study with consistent stratigraphy of the European Quaternary. To our knowledge this is a first attempt to gather all published and accessible information on Quaternary freshwater gastropods bearing localities in Europe and adjacent areas. Attached to this work we provide a fully geo-referenced dataset for 1473 literature-based fossil sites across Europe (see Appendix 1). This work is a substantial expansion of the dataset of Neubauer et al. (2015), which aimed for a comprehensive compendium of the Neogene (sensu Gradstein et al., 2012) localities of Europe with fossil freshwater gastropods. Since the age attributions are still ambiguous in some cases and geographic information is patchy for certain areas, this synopsis has to be considered as first step, which is open to improvements and additions.

Data were compiled after an elaborate review of the available literature on the Pleistocene and Holocene fossil and subfossil freshwater gastropod assemblages. The information on the sites and their stratigraphic age derives from original papers but is often updated according to current knowledge. The main sources were online sources (e.g., Biodiversity Heritage Library) as well as numerous journals and books stored at the Geological-Palaeontological and Zoological Departments of the Natural History Museum of Vienna, which were systematically screened for contributions on post-Pliocene freshwater gastropods. 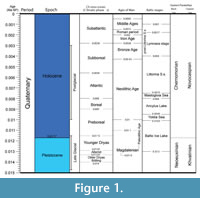 Furthermore, specialists on freshwater gastropods were contacted for copies of their publications when those were not available in any of the sources mentioned above. It is important to note that the list of localities provided in this work is not complete. Despite our efforts, not all literature sources were accessible, whereas others may have been unintentionally overlooked.

The main online source used to georeference the localities was Google™ Earth 7 software (version 7.1.2.2041). The study area is the European continent including Asia Minor and westernmost Asia (Turkmenistan). These regions were included due to their common palaeogeographic history (Rögl, 1998; Popov et al., 2004). In total, stratigraphic information was extracted from 421 publications (see Appendix 1). The stratigraphic tables (Figure 1, Figure 2) are based on the global chronostratigraphic correlation table for the last 2.7 million years (Cohen and Gibbard, 2011). 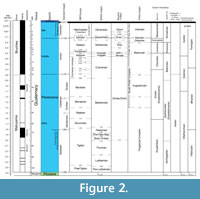 Accordingly, they are products of composition of several publications. In particular, the proposed age boundaries for the chronozones of the Holocene are largely based on Magny (1995), Litt et al. (2001), Bitinas et al. (2002) and Mouthon and Magny (2004, 2014). The Ages of Man are partly supplemented by Holzhauser et al. (2005) and Grosjean et al. (2007). The Baltic stages are after Hyvärinen (1984), Jensen et al. (1999), Damušytė (2009) and Wojciechowski (2011). The Postglacial is defined according to Dehm (1967), the Late Glacial is based on Bos et al. (2001) and Litt et al. (2001) and the Pleniglacial on Bos et al. (2001). For the Pleistocene, the standard Italian stages, the North West European stages and the British stages are derived from Cohen and Gibbard (2011). The Bavarian stages are taken from Doppler et al. (2011). The outline of the Polish stages was taken from Ber (2005) and Lindner et al. (2013). The ambiguous terms Diluvial/Ältere Kalktuffe and Alluvial/Jüngere Kalktuffe/Subrecent were assigned to Pleistocene (1.806-0.0117 Ma) and Holocene (0.0117-0 Ma), respectively. The chronostratigraphic tables are as complete as possible, including the main units that were used to describe the age of the respective sites. Nevertheless, some terms (e.g., local names of Glacial-Interglacial stages) are omitted due to space constrains and readability.

In total, the list comprises 1487 entries on Quaternary localities, derived from publications of the nineteenth century up to the present. The stratigraphic time interval covered is 0-2.588 Ma. All localities are fully georeferenced, expect for 14 of which the geographic precision is restricted to country level and thus, they are not drawn on the map. In these cases the name of the site as provided in the publication could not be matched to a known geographic name. 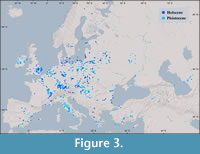 The current dataset’s latitude ranges from c. 34° N to 68° N and the longitude runs from c. 10° W to 58° E (Figure 3). The obvious scarcity of points northern than 59° N can be explained by the glacial erosion, while the lack of data for Eastern Europe is mainly due to the unavailability (to us) of regional publications. An overview of the geographic and stratigraphic dataset of the Quaternary localities is provided as an Acrobat PDF file (.pdf) (summarized in Appendix 1). It is accompanied by a Keyhole Markup Language file (.kml) (see Appendix 2), which can be easily visualized in different Geographic Information Systems, such as Google™ Earth and ESRI® ArcGIS™. In addition, the placemarks of the kml-file are color-coded to correspond with each epoch (i.e., Holocene - dark blue, Pleistocene - light blue). Below a full explanation of each dataset field is given (following Neubauer et al., 2015):

Locality. Name of the locality with indication of sample (when applicable). Locality is equal to the name of the parent administrative unit when precise data is unavailable.

Country. The current country the locality is situated in.

Stratigraphic age. Age of the deposits. Additional information is in brackets, when the absolute ages vary between different publications or palaeogeographic settings (e.g., former base of the Quaternary before 2009). When the age was uncertain or unavailable, the most probable stratigraphic age was assigned by the authors, often based on information from regional geology. The assigned age of a locality only corresponds to layers with the recorded freshwater gastropod assemblage of lacustrine, fluvial or brackish origin. Thus, the total stratigraphic range represented by a section might be larger.

Age, upper boundary. Absolute age of upper boundary of given stratigraphic interval as derived from the literature. Localities with stratigraphic ages crossing the Pleistocene-Holocene or Pliocene-Pleistocene boundary were assigned to the epoch which constitutes the larger portion (e.g., Villafranchian is assigned to Pleistocene). This convention avoids duplicates and potential overlap with the list of Miocene-Pliocene localities by Neubauer et al. (2015).

Epoch. The epoch the locality is assigned to.

Alexandrowicz, W.P. 1999. Evolution of the malacological assemblages in north Poland during the Late Glacial and Early Holocene. Folia Quaternaria, 70:39-69.

Gibbard, P.L., Head, M.J., Walker, M.J.C., and the Subcommission on Quaternary Stratigraphy. 2010. Formal ratification of the Quaternary System/Period and the Pleistocene Series/Epoch with a base at 2.58 Ma. Journal of Quaternary Science, 25:96-102.

Hyvärinen, H. 1984. The Mastogloia stage in the Baltic Sea history: diatom evidence from southern Finland. Bulletin of the Geological Society of Finland, 56:99-115.

Mouthon, J. and Magny, M. 2014. Unprecedented changes in mollusc assemblages of the littoral zone in the two largest peri-Alpine French lakes since the last 4500 years. Journal of Limnology, 73:20-30.

Sparks, B.W. 1961. The ecological interpretation of Quaternary non-marine Molluscs. Proceedings of the Linnean Society of London, 172 :71-80.

Szymanek, M. 2013. Palaeoecology of the Holsteinian lake in vicinity of Wilczyn (eastern Poland) based on molluscan studies. Geological Quarterly, 57:637-648.

Szymanek, M., Nitychoruk, J., Trammer, J., and Bińka, K. 2005. Influence of climate on the variability of snails of the genus Viviparus in deposits of the Holsteinian (Mazovian) Interglacial from Ortel Królewski, eastern Poland. Boreas, 43:335-344.

Wojciechowski, A. 2011. Stages of the evolution of the South Baltic coast as recorded in the molluscan fauna. Journal of Coastal Research, ICS2011 Proceedings, 64:711-715.